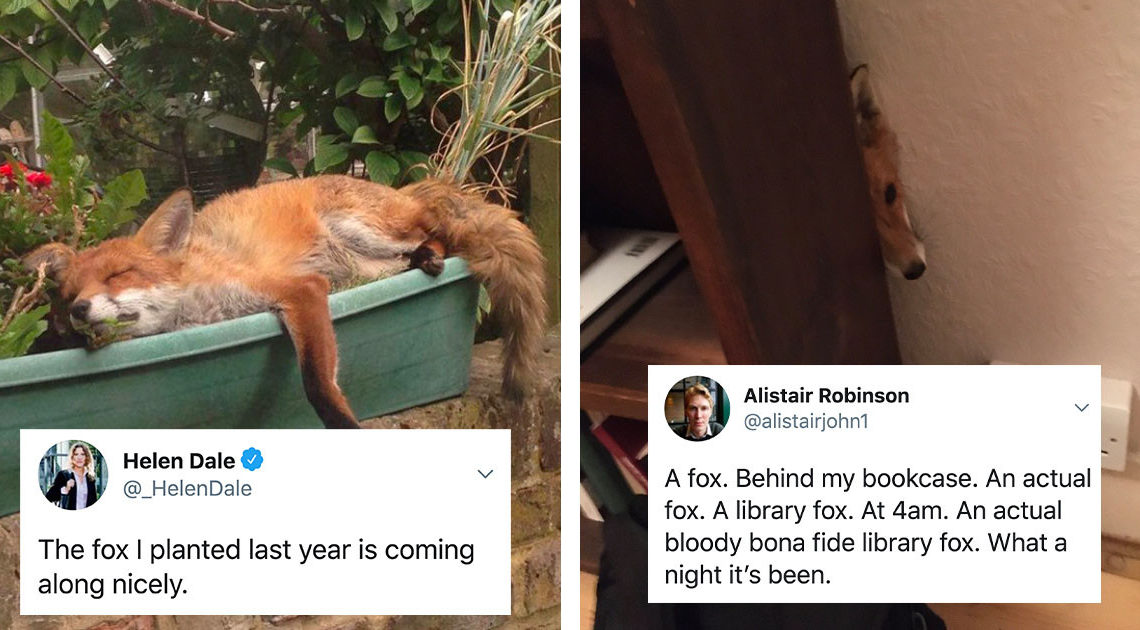 As mankind continues to develop further and further into the nooks and crannies of the wilderness, encounters with wildlife have done nothing but increase. This new relationship dynamic frequently has a slough of devastating consequences (have you ever seen an obese raccoon? They’re not cute.)

However, for Urban Red Foxes in North America and all the way to Great Britain, integrating into communities is not the result of human interference. Their diets are naturally omnivorous and thus quite diverse so approaching humans was simply natural for the synathropic, edge species.

To clarify, Urban Red Foxes are considered a ‘synanthropic species,’ they “live near humans and directly benefit from human-altered environments like gardens, garbage dumps, and farms.” Other synathropic species include coyotes, the raccoon, skunks, and some rodents.

According to the Candid Project: “These species have learned how to exploit human-created habitats, and they thrive in a mosaic of suburbs and cities next to woodlots and fields, which provides some distance from humans, but also the close proximity that benefits them as well.”

If you have a regular fox visitor, you might notice they bury excess food in your garden and yard. This is normal behavior. BBC Wildlife says:

“Foxes are not all fussy about sell-by dates, however, and some of the food they consume is more maggots than anything else, but is still eaten with relish.” 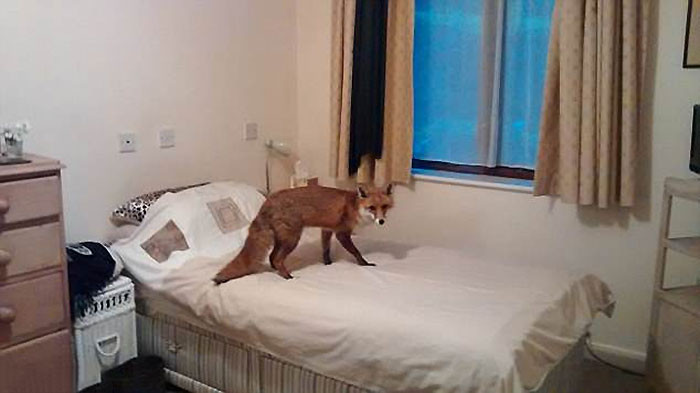 2. “Found This Fox Chilling In The Backyard” 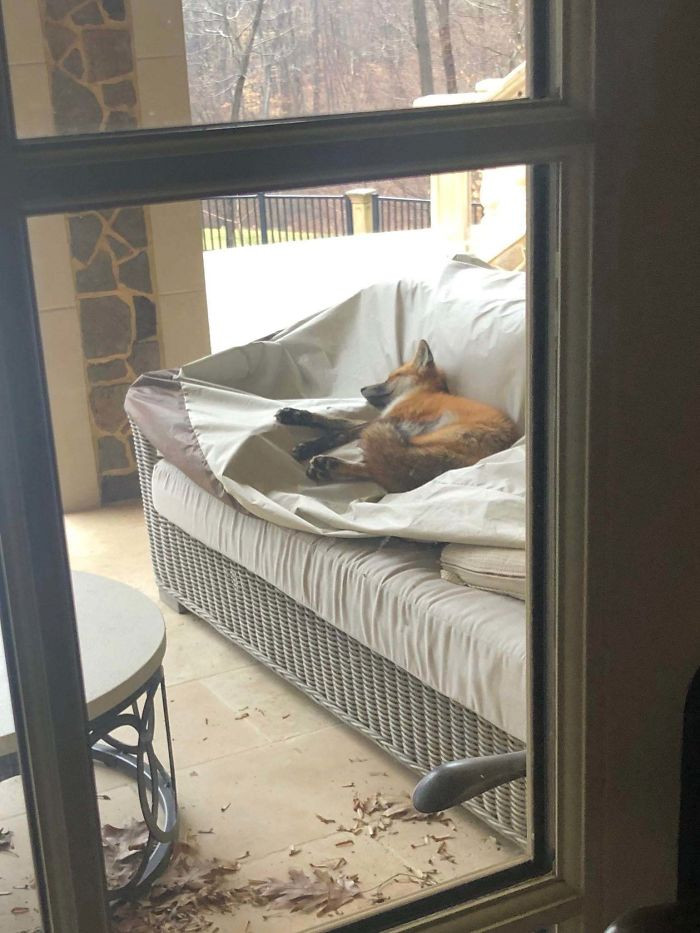 3. “One Wandered In To Our House Yesterday And Ate My Headphones”

That wasn’t the tasty snack he was looking for. 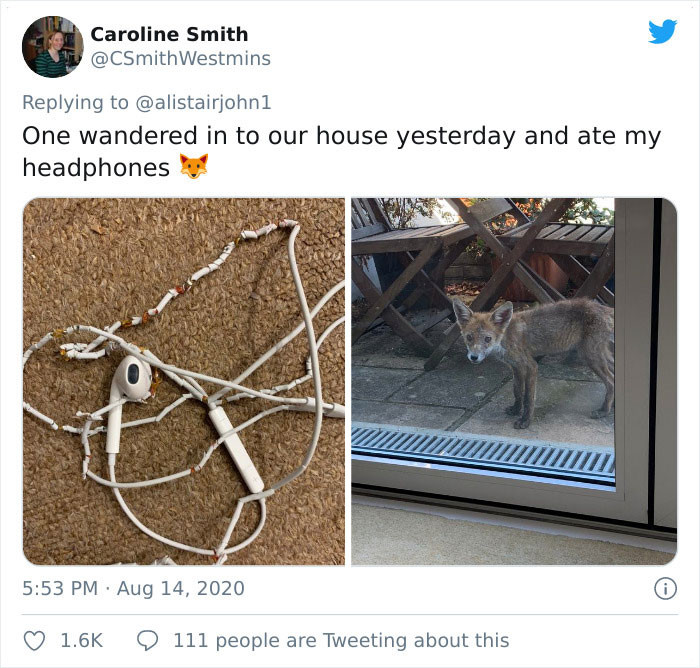 4. “This little fella got stuck in our spare room a couple of years ago…. I like to think he’s one the adults that comes to visit (and dig for worms int he lawn.)”

According to BBC Wildlife, when it comes to human foods foxes, “like cooked or raw meat and tinned pet food. Foxes also like other savoury items such as cheese, table scraps, bread soaked in fat, fruit and cooked vegetables.” 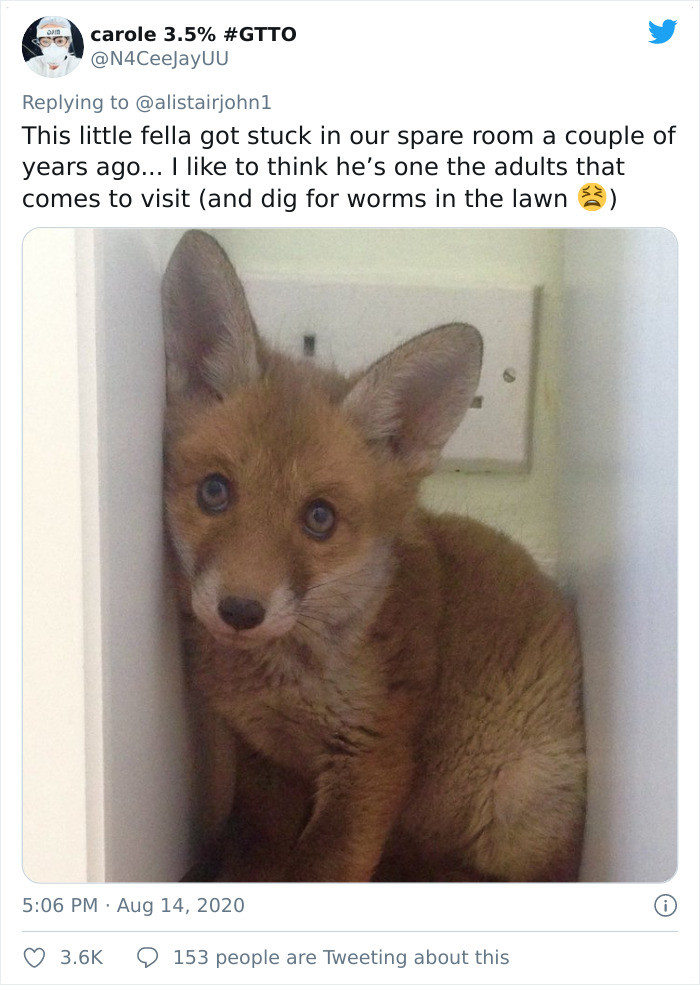 5. “So A Fox Decided To Show Up Outside My Door In The Middle Of The Night” 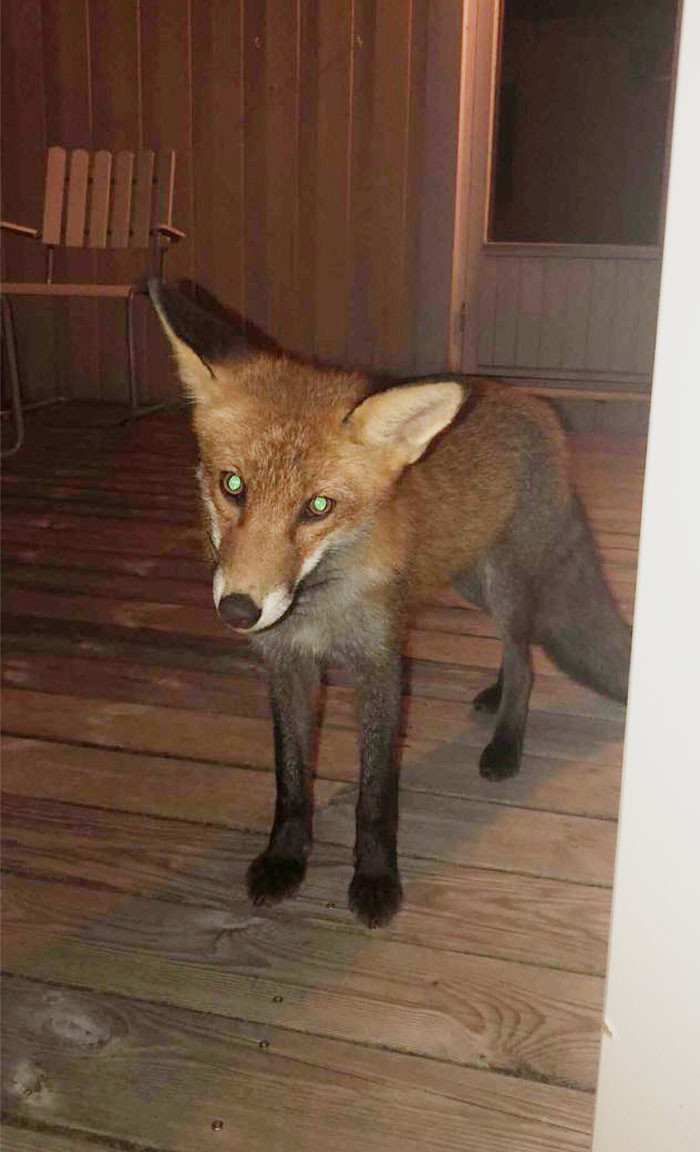 Are you worried about your domesticated cat? BBC Wildlife says not to worry about a fox encounter hurting or killing your feline friend:

“It’s possible but very unlikely. A typical urban fox home range can be occupied by upwards of 100 cats, and most of these are out at night. Foxes and cats meet many times every night, and invariably ignore each other. When a fight does break out, it’s often the fox that comes off worse in the encounter.” 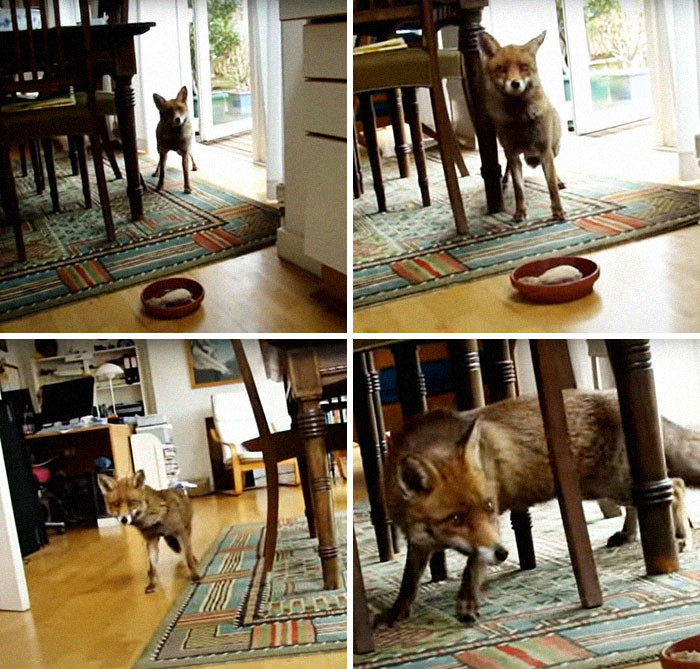 7. “What Happens When Foxes Live In Your Garden”

While your fox visitors won’t become dependant on you if you leave scraps and snacks for them, BBC Wildlife says, “if foxes are fed heavily and regularly they can be come over-confident and less wary of people. This could encourage them approach strangers for food, a situation that should not be encouraged.” 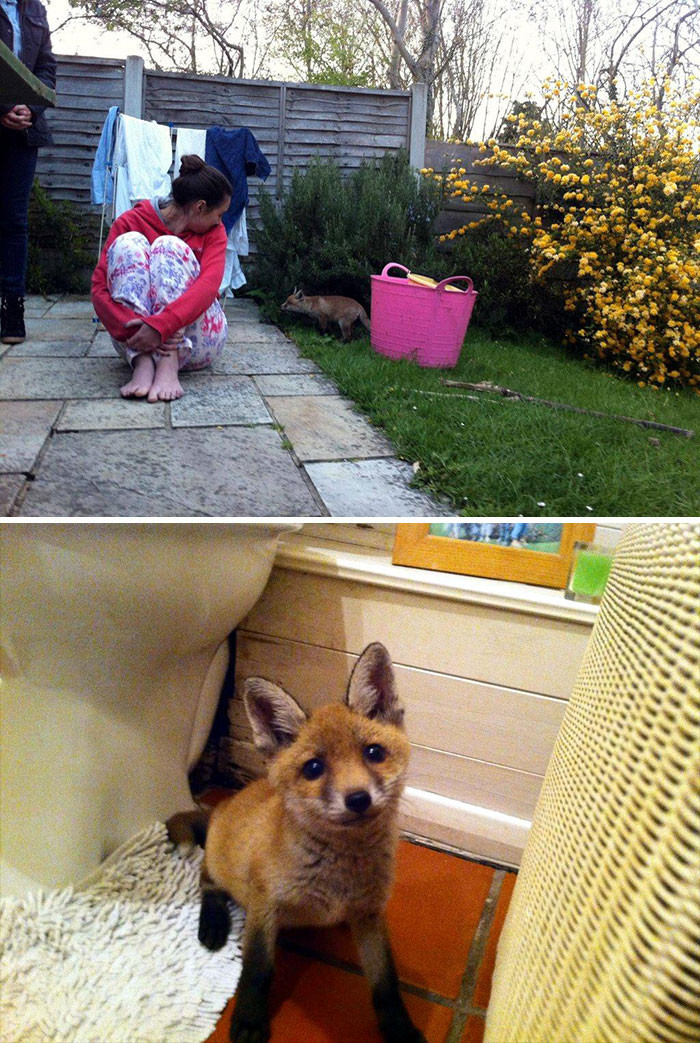 According to BBC Wildlife, Urban Foxes have a varied diet:

“Urban Foxes eat earthworms, insects, fruit and vegetables and a wide variety of both domestic wild birds and mammals. Insects include large numbers of beetles, cut worms (the larvae of noctuid moths, which they get off lawns on wet nights), and both larval and adult craneflies. Most of the birds they eat are feral pigeons and small garden birds, and the most frequently eaten mammals are generally field voles, abundant on allotments, railway lines and other grassy areas. “ 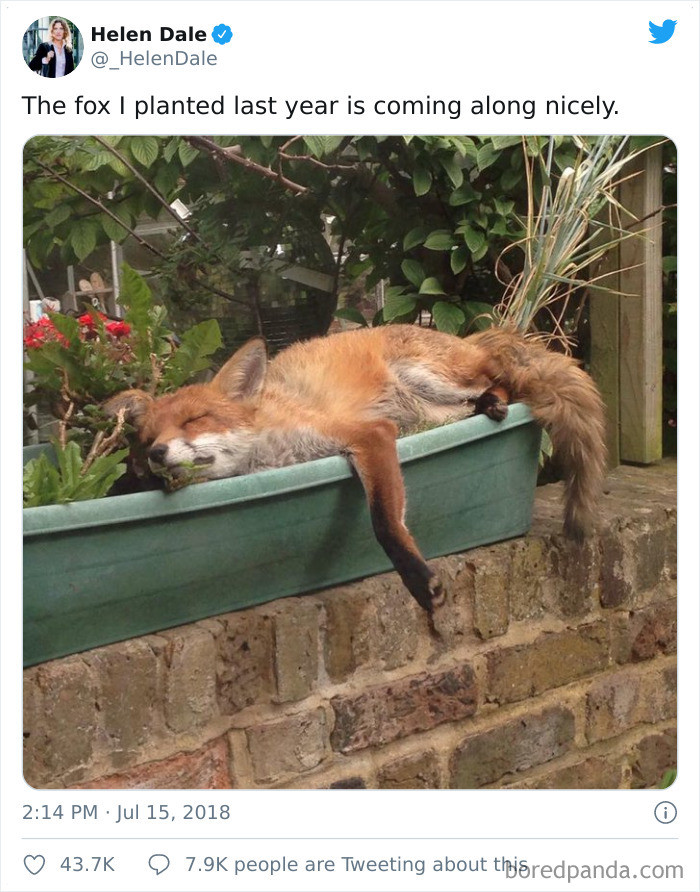 Red foxes weigh on average between 4.9lbs and 31lbs. 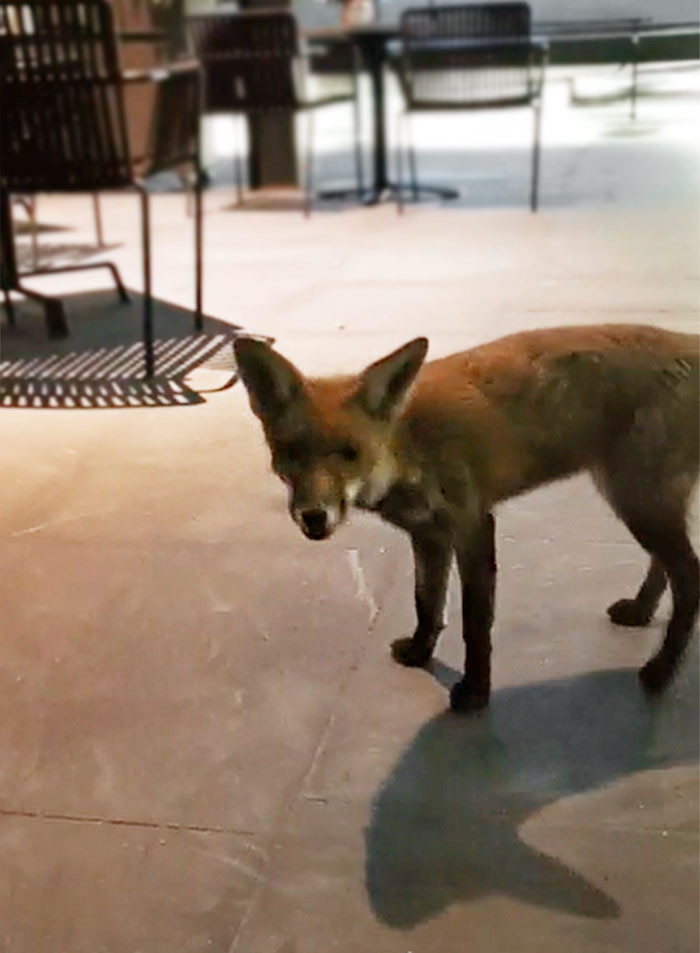 10. “Here’s A Fox Who Wandered Upstairs To Check Out My Bookshelf A While Ago”

Maybe foxes just like to read, did anyone consider that possibility? 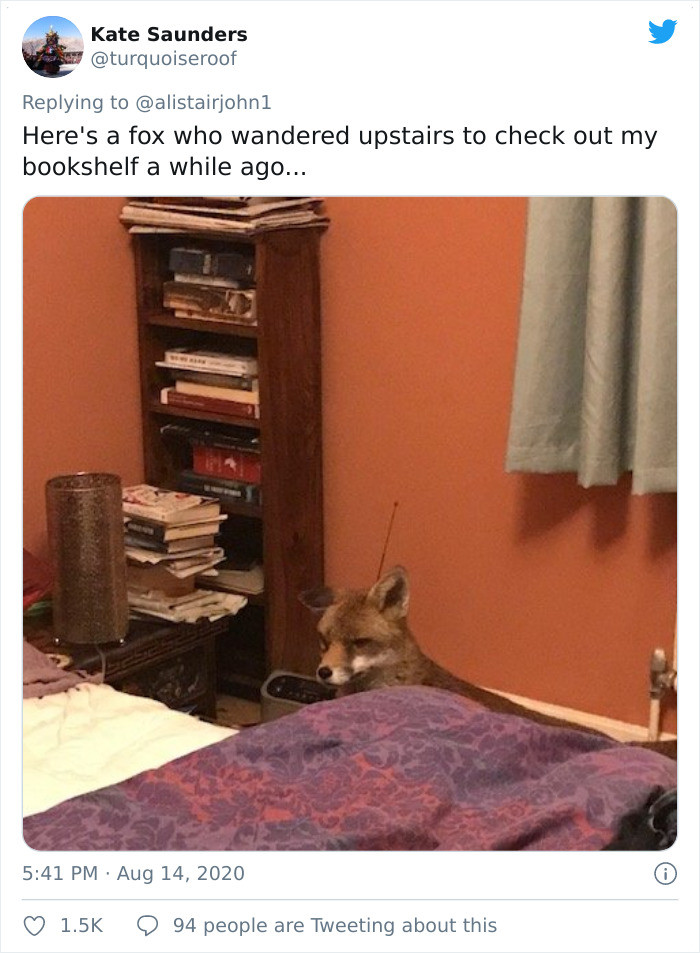 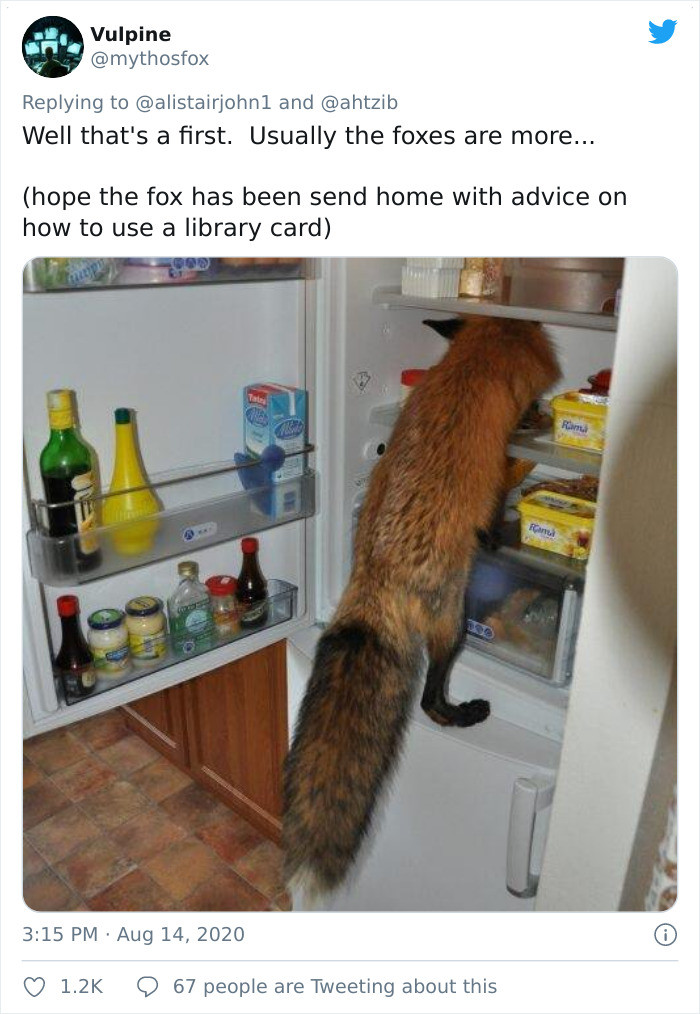 12. “A Fox Sneaked Into A Furniture Shop And Chilled On Top Of One Of The Couches. He Was Lured Out With Pancakes”

They should definitely name him pancake. 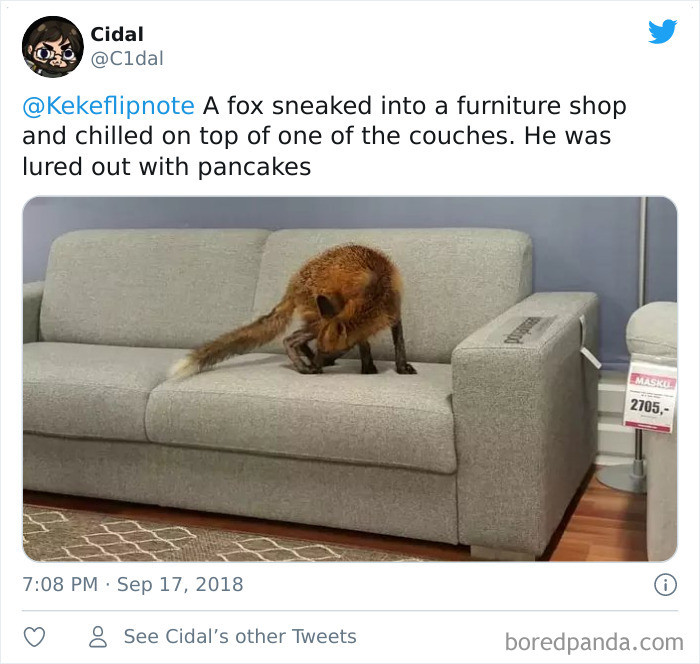 13. “Foxen Sleeping On Friends Upstairs Deck. Last Year There Was Only One” 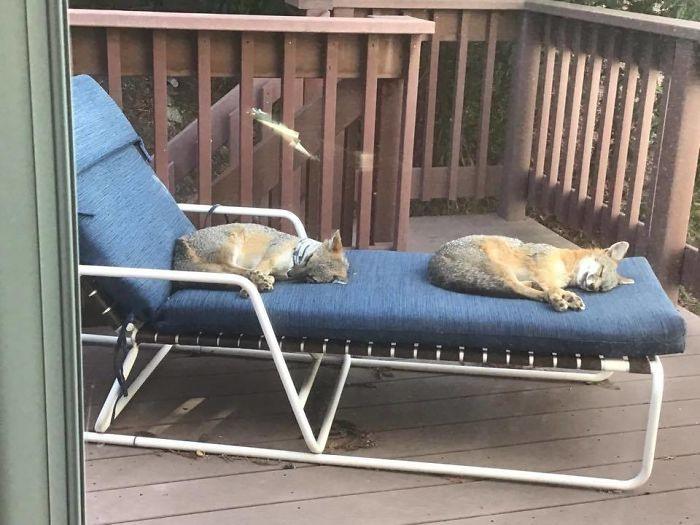 14. “Caught This Fox Napping In My Garden”

A red ray of sunshine. 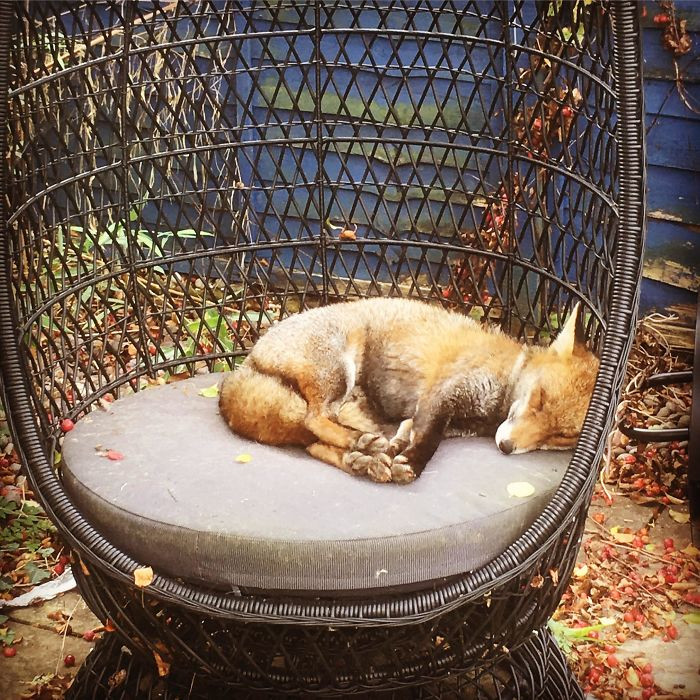 15. “Our Local Fox Is Getting More Brave”

Yep, that will happen! 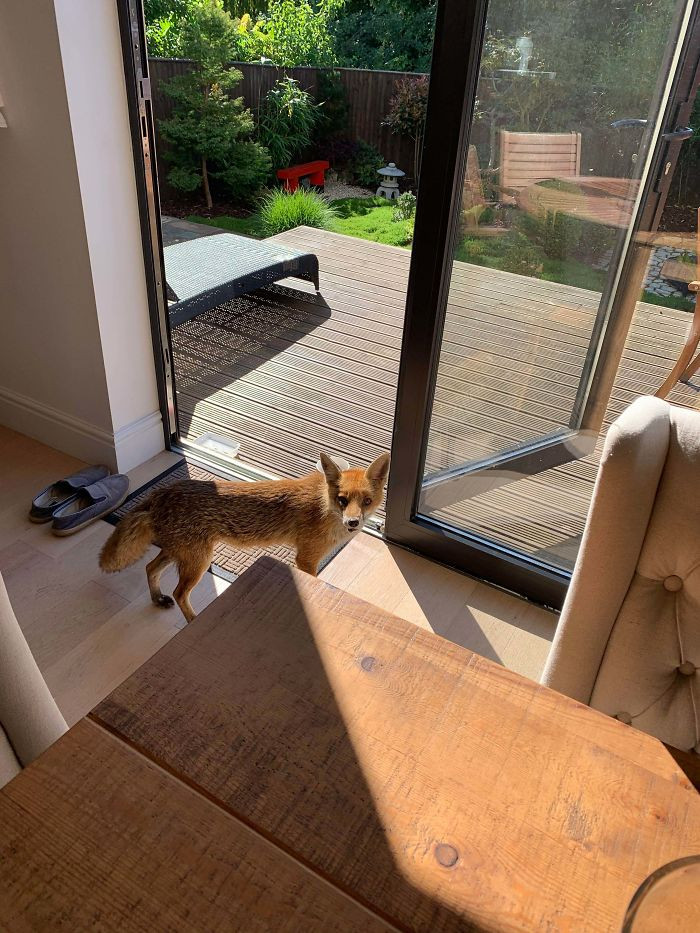 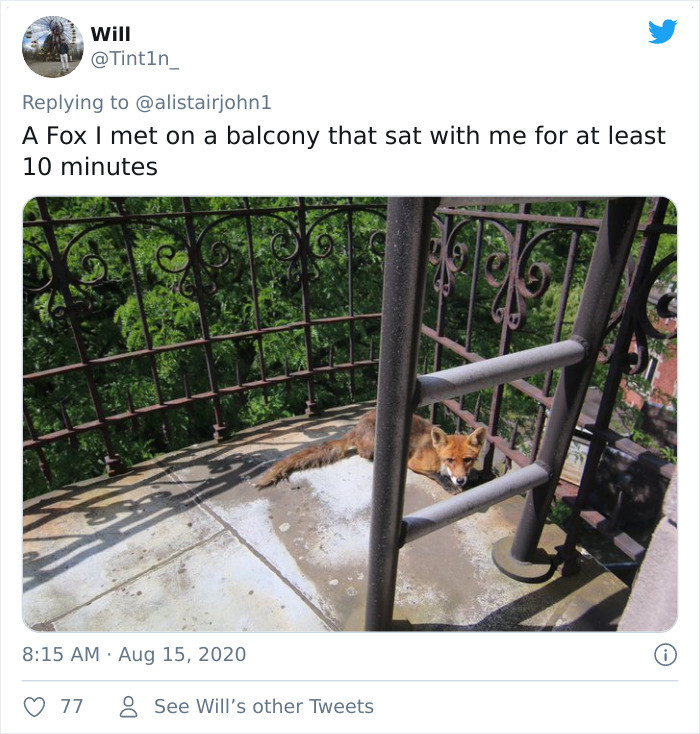 Should you feed your little foxy visitors? BBC Wildlife Says:

“If you want to, yes; lots of people feed foxes, either regularly or occasionally, and get a great deal of enjoyment from doing so, but please be aware they are wild animals – feed and watch them, but don’t try and tame them.” 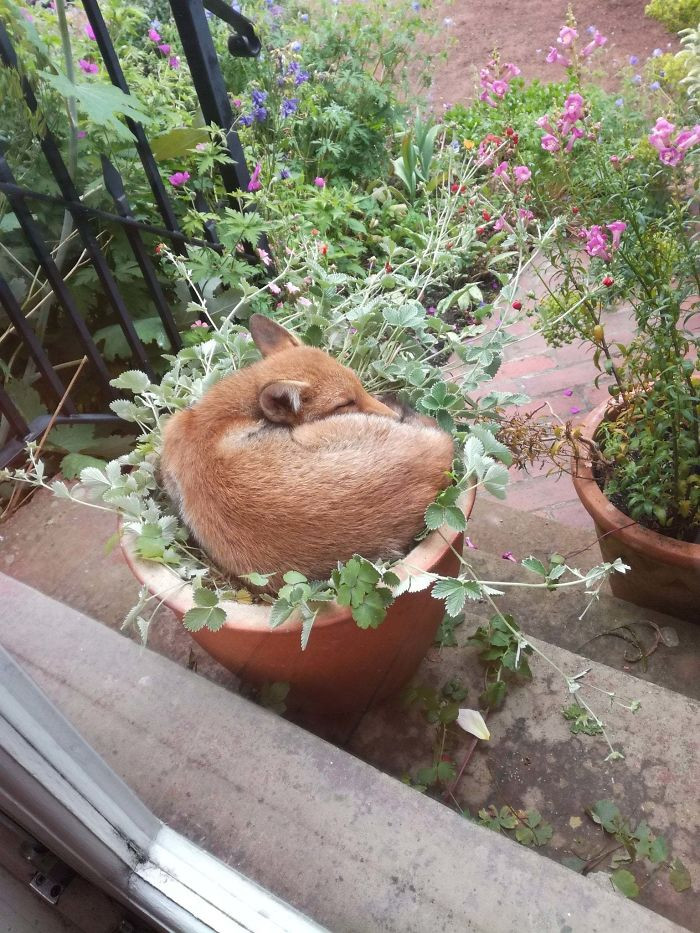 18. “Curious Fox Wanders Into Home To Steal A Drink During Lockdown In Dublin” 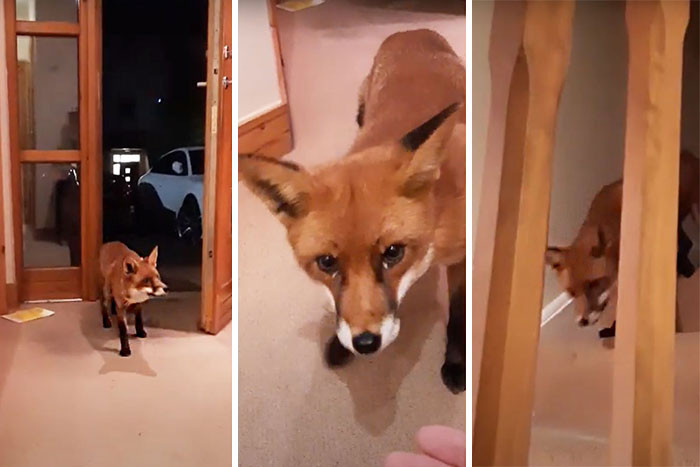 19. “Walked Into The Kitchen Only To Find A Fox That Had Just Randomly Decided To Sneak Into The House And Take A Nap On Top Of Their Microwave”

Foxes require cover for their dens, your home and microwave might make good cover when they’re out and about. 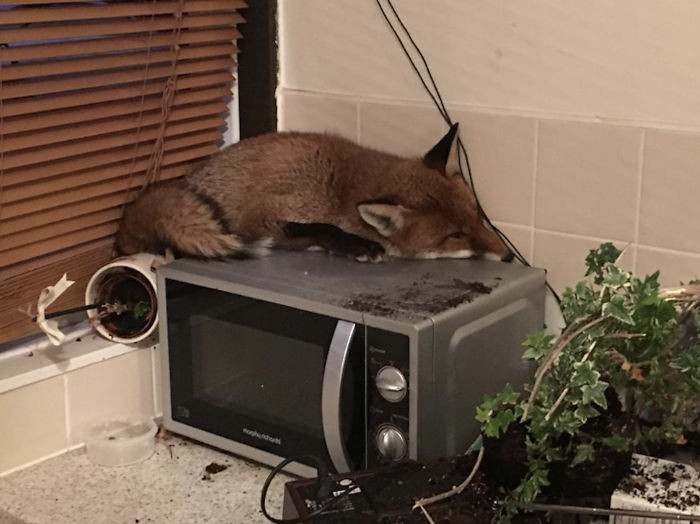 20. “Fox Sneaks Onto Ottawa City Bus For A Nap”

You nap where you gotta. 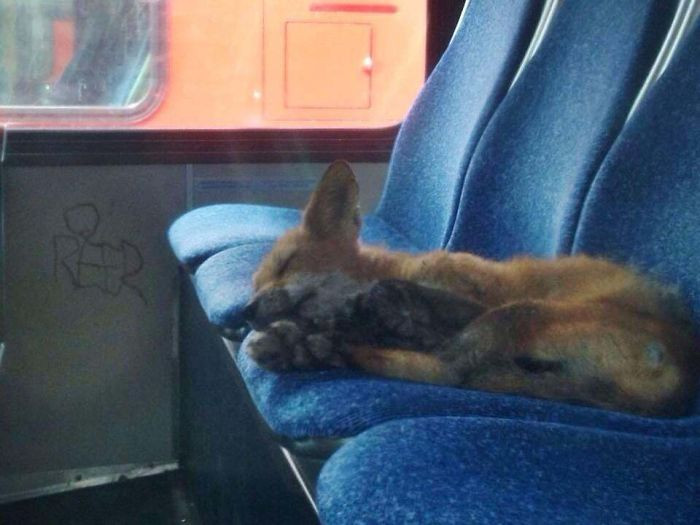 21. “Becoming Buddies With A Fox That Wandered Into Our House”

“There few reports of foxes attacking people – a handful a year, while the NHS report that more than ten people a day go to hospital for treatement for dog bites. A fox may bite or defend themselves if cornered (most recent instances of fox bites happened when a fox was cornered or in unfamiliar surroundings). So if you find one in a shed, or even in the house, leave the doors open and it will flee as quickly as it can. Also do not worry about leaving your baby or children in the garden; foxes often show less fear of children than adults, but are unlikely to attack one.” 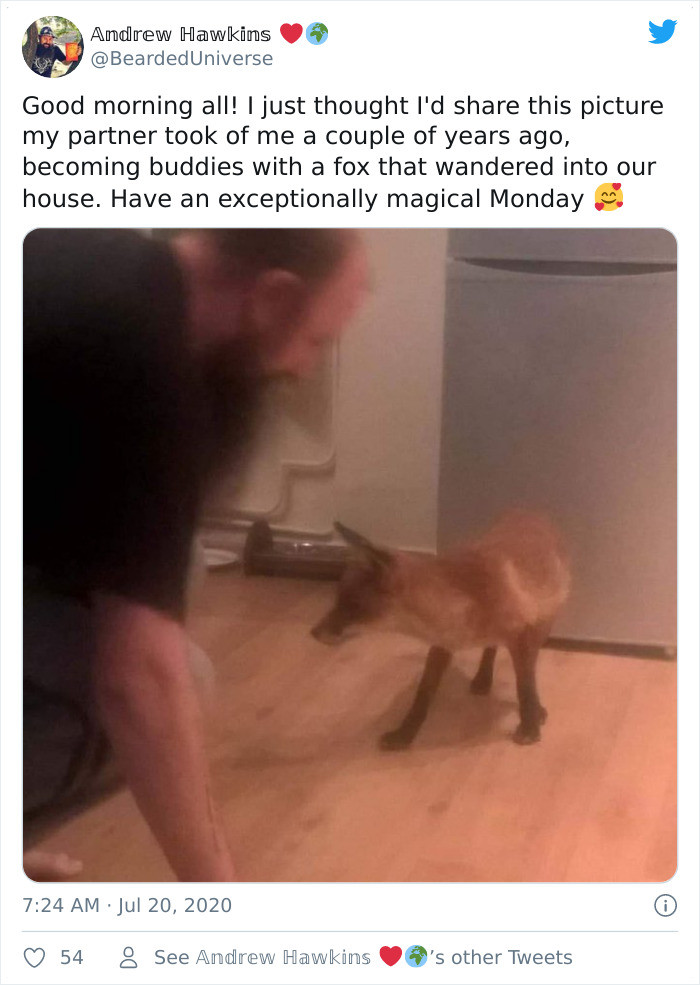 Wild is putting it lightly. 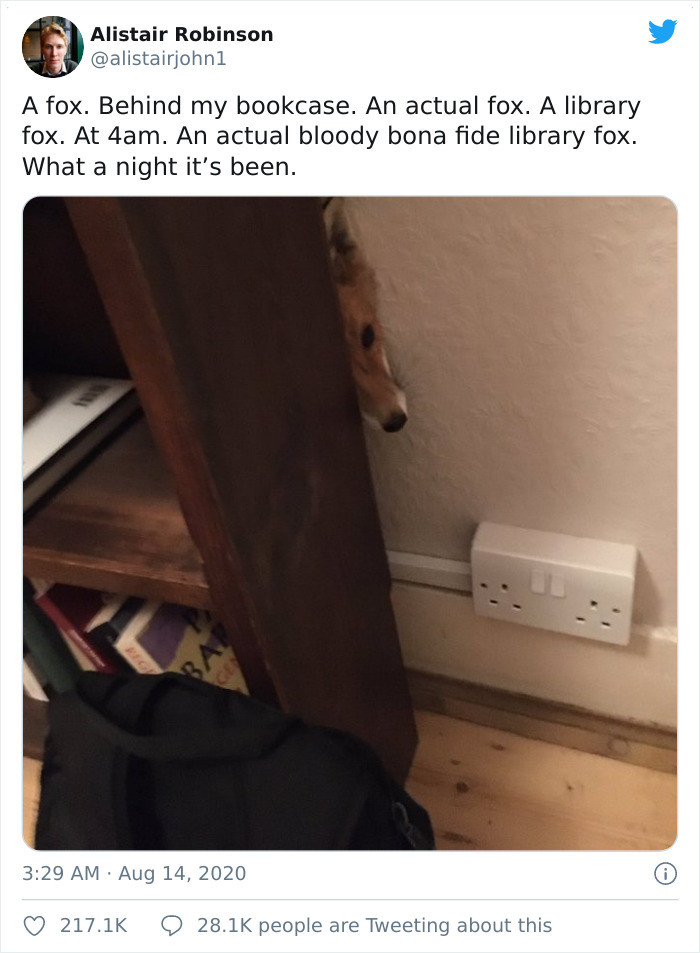 23. “I Think Someone Has A Crush On My Christmas Light Decoration” 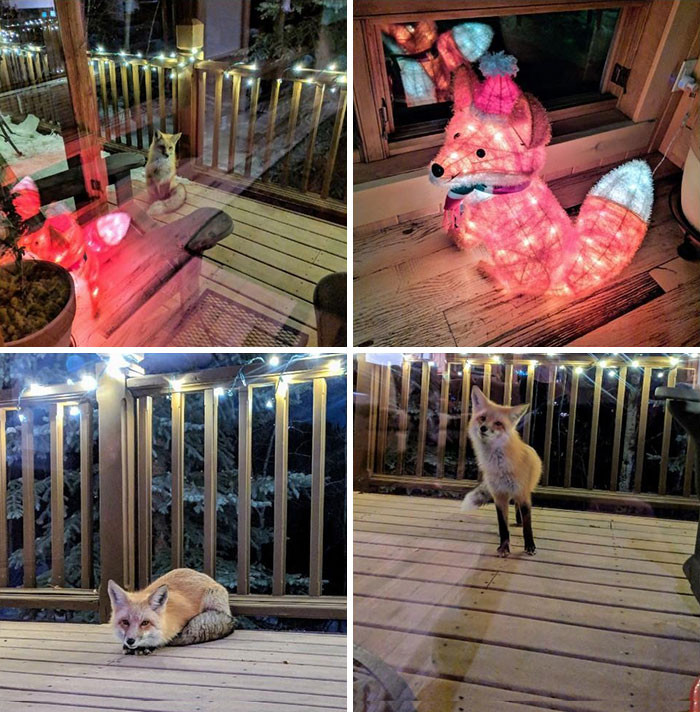 24. “Our Humane Officer Was Called Out To Ocean Beach Yesterday Because A Resident There Reported A Critter Had Gotten Into Her House. The Resident’s Dog Was Playing With An Unknown Animal, Who Ended Up Running Into The House”

He had a little encounter. 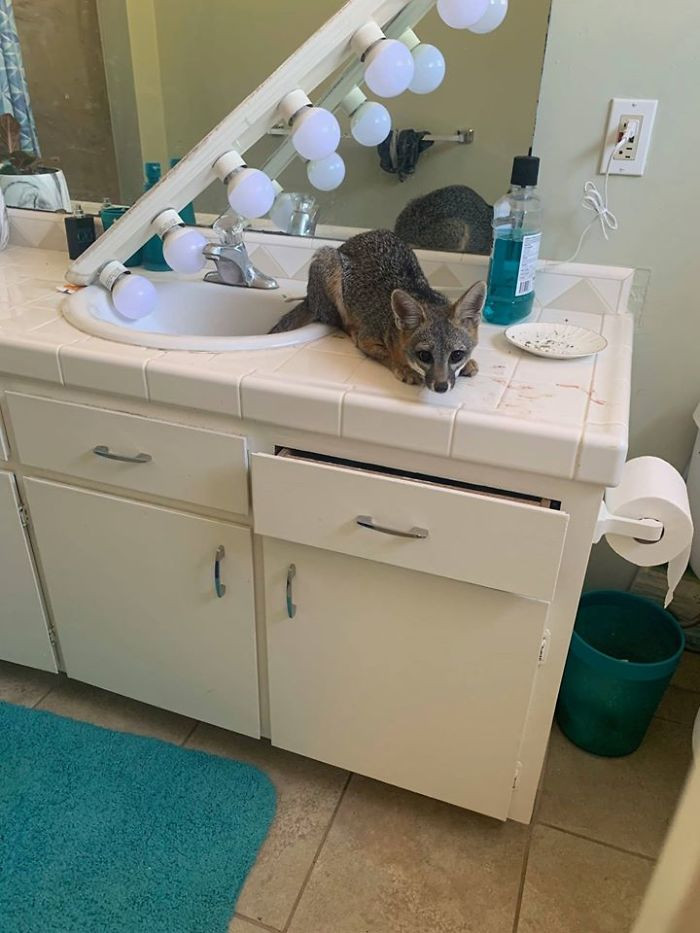 25. “Do You Get Visitors Like This? I Love Our Local Foxes”

Per the Candid Project, it is “a common misconception that the reason we see an influx of foxes and coyotes in our suburbs and cities is because we have supplanted their woodland homes with our development. Although habitat loss for some species is a real issue that has forced animals from their territories, synanthropic species, like the red fox, are seldom true forest animals by nature, but rather “edge species”.” 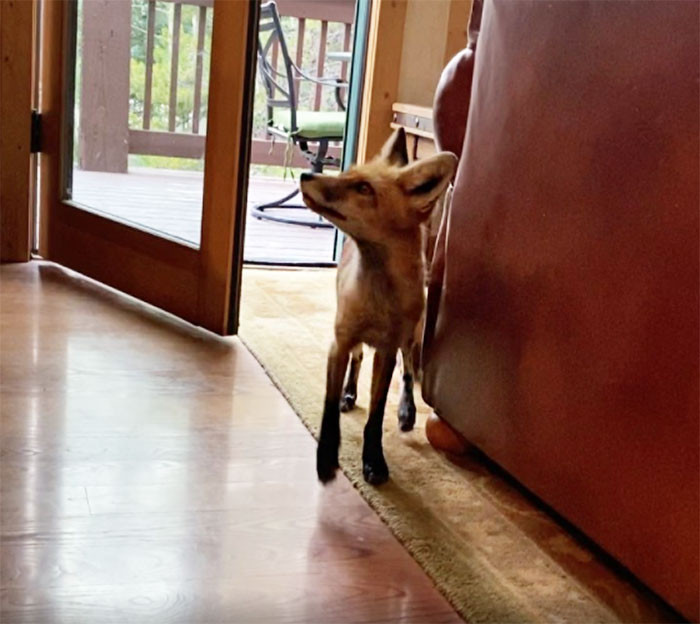 They both look extremely annoyed. 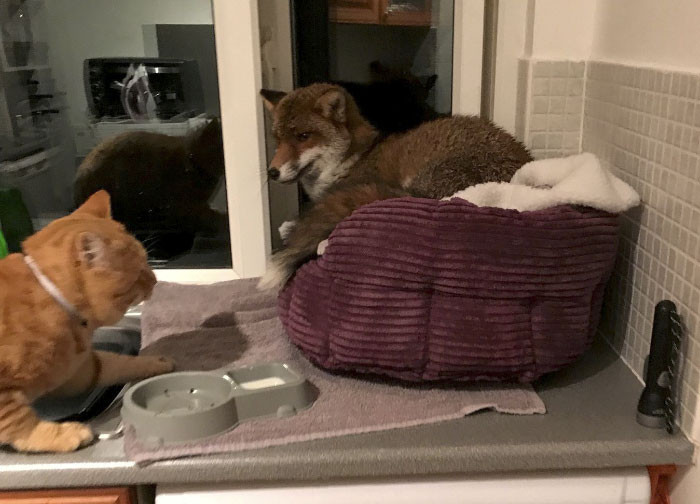