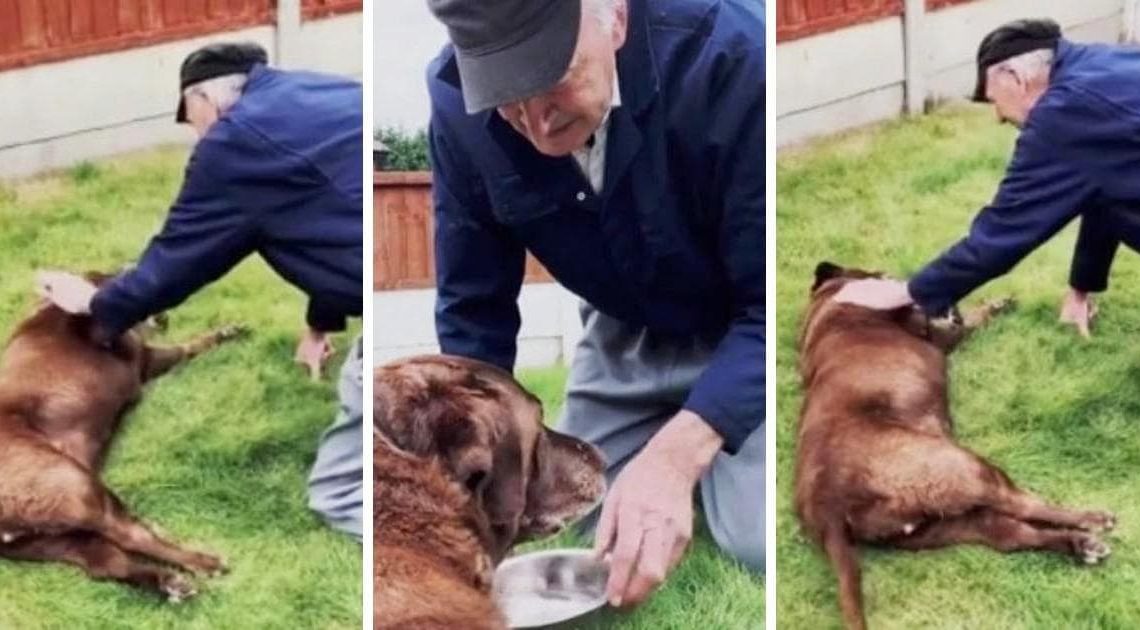 Nowadays, pets are part and parcel of our lives. Some adore cats, some horses, while others swear by dogs. Once you bring a pet home, you develop an emotional connection with them immediately. They become your friend and companion through difficult times, and some people even refer to them as their children or important member of the family. With the unconditional love pets show us, they deserve the love and support back as well. This is also why when they become sick or pass away, they leave an empty spot in our hearts, and it is akin to losing a close family member.

Sometimes, we don’t even need to have our own pet to get close to animals. Our neighbors’ or friend’s pet can also become a big part of our lives, and we come to care for the pet like he or she is our own. Sometimes, we may even be encouraged to adopt an animal after spending time with other people’s pets.

In this video from September 2020, Bailey the dog is close to dying, but she receives one last visit from her 90-year-old neighbor with whom she had developed a close friendship.

We can’t seem to trace the origin of the video but we found it on the internet and were emotionally moved by this special bond. The neighbor would feed Bailey a biscuit every day, and this video is a testament to their friendship. It goes to show that animals are truly pure souls who do not expect much but give everything they have in return to their humans. 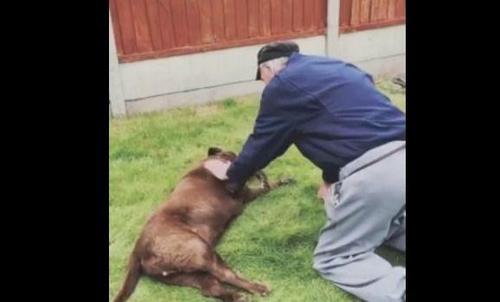 The video was taken by a TikTok user named maisie_and_co, who uses the caption function within the videos to explain what is happening when the neighbor comes to visit. The user explains that Bailey is her dog and the poor animal was on the verge of dying when her neighbor, who is 90 years old, arrived to say farewell to her before she passed. The neighbor came in while the dog was lying on the ground and proceeded right toward where the sweet dog was. She kept on wagging her tail, which was a sign of excitement at having seen her friend again.

The neighbor then slowly went on his knee and placed his hand on her, and then started patting the dog with a lot of affection. Though the viewers do not know what might be afflicting the dog or why this is the last meeting for both the neighbor and the pet, the emotions that everyone feels in the video are quite clear. As she was petted by her friend, the dog lay there soaking in the love, the affection, and compassion that she was used to from this particular person.

Seeing him made her elated and the connection and bond are very clear from how still she lay. In some ways, this could likely be her daily dose of medicine, so to say— all of us need to feel love and affection once in a while and the neighbor was happy to give the dog whatever he could. We can only imagine how difficult the moment might have been for the senior man. 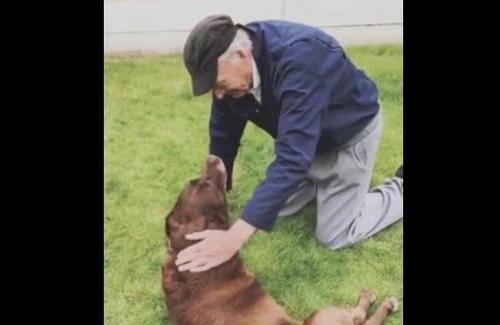 The person making the video explains that the dog had gotten a biscuit from this 90-year-old neighbor, which had strengthened the bond that these two already had. They clearly enjoyed each other’s company. As the patting continued, she raised her head and looked at her friend as though passing a thank you message over to him.

The neighbor smiled back at his friend. The dog then fell back on her back, which showed that she trusted this man. Wag Walking.com reports that one of the reasons that dogs show someone their belly is because they feel safe and trust that person, and it is one of the best indicators of a strong bond.

Seeing something, someplace, or someone knowing you’ll never see them again is always very poignant — and many people take these opportunities to spend time with the person or animal in the most loving way possible. It may have been difficult for a 90-year-old man to bend down and remain on the ground for so long, but he does it anyway with a loving heart even though he knows it may be the last time he meets his friend.

The next moment they spent together was extremely tender. Watching as the old man took a bowl of water and started giving it to her with his bare hands, we see a very soft moment. With her tail still wagging, the dog attempted to drink the water from the bowl but it looked like she couldn’t do it so well. So the man took small amounts of water in his cupped hands and fed his friend the water. It is an incredibly touching moment. 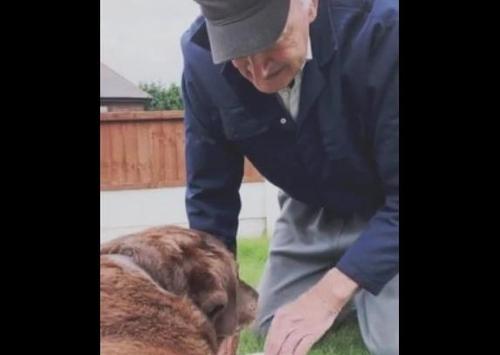 When the dog seemed satisfied with the water intake, he then started cleaning her mouth with care and compassion. The connection was so natural and beautiful to see.

He then started talking to her and they seemed to understand each other very well. The two acquaintances were saying their final goodbyes. He was smiling but seemed sad as well because he knew what was going to happen after this. He was holding on to this moment and the dog friend was reciprocating. It was as if they had a language of their own. This is a beautiful story of friendship that is poignant enough to melt the hardest of hearts. It must have been an incredibly difficult moment in the lives of the owner as well as the neighbor.

Friendships are beautiful as they offer support, love, and care especially when we most need it. Friends laugh with you when you are going through a beautiful phase in your life and cry with you when going through a hard time. This is what this 90-year-old man was to the dog, and it looked like she felt the same way about her friend.

Going from seeing someone every other day, playing with them, and sharing meals like the old man sharing biscuits with his friend, to not seeing them at all can be very hard. The old man and the dog are privileged as they got to share one such moment because many never get the chance for that. Everyone deserves a genuine friendship like the one these two share. A relationship of love, care, compassion, and one that will last till eternity regardless of how much time they spent together on Earth.