After He Arrived He Refused To Let It Go, It Was His One Link To The Only Home He Had Ever Known! 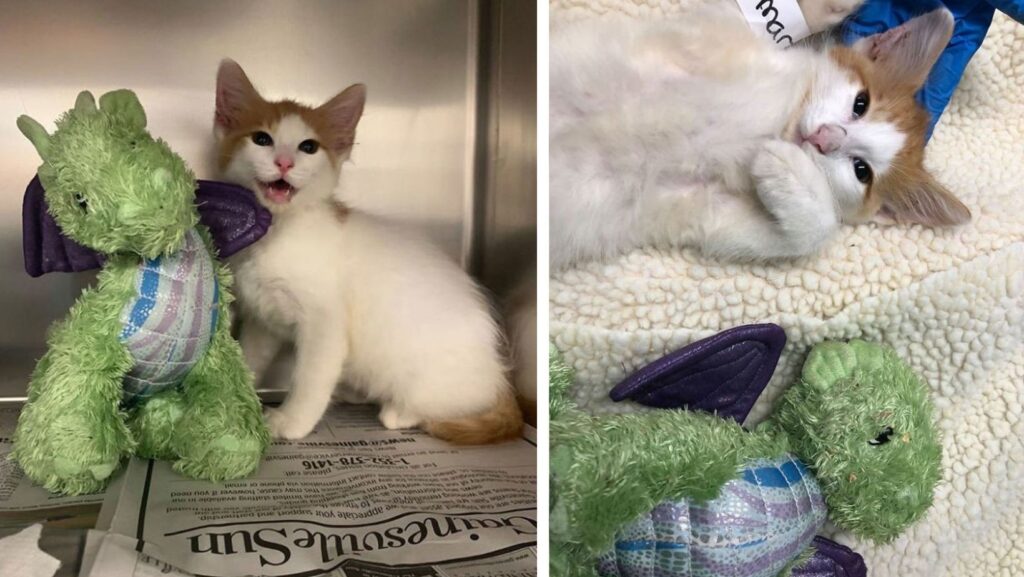 WHILE THEY WERE HOME ONE DAY IN FLORIDA, SAMANTHA SMART AND HER FAMILY HEARD THE PLAINTIFF MEOWS OF A KITTEN SOMEWHERE NEARBY.

“It wasn’t just a meow, it was a sad little cry,” Samantha said.

“He had the whole neighborhood working together to find and trap him. We have one cat already, so we weren’t really looking to add another, but it felt like Ponyo was meant for us!” 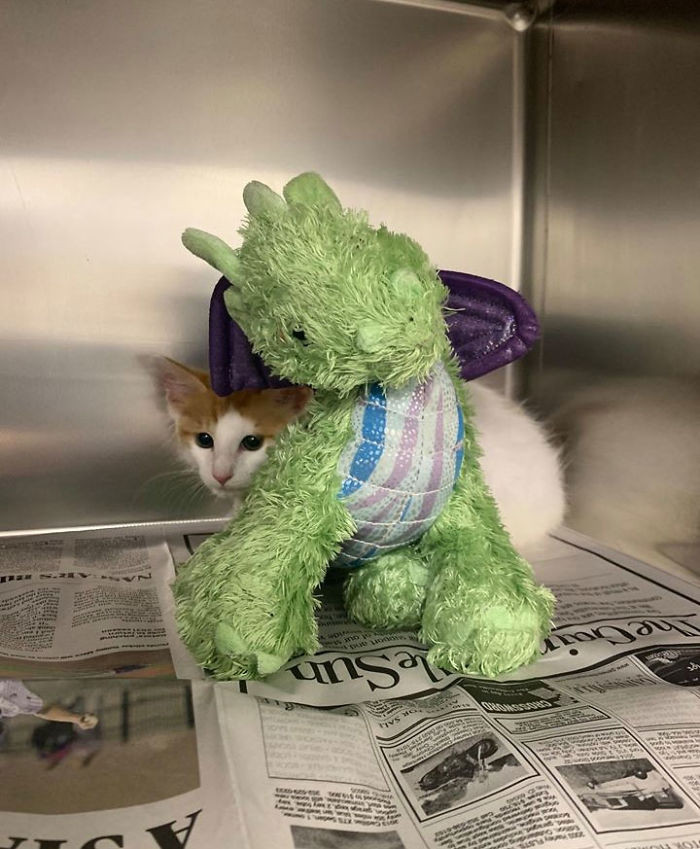 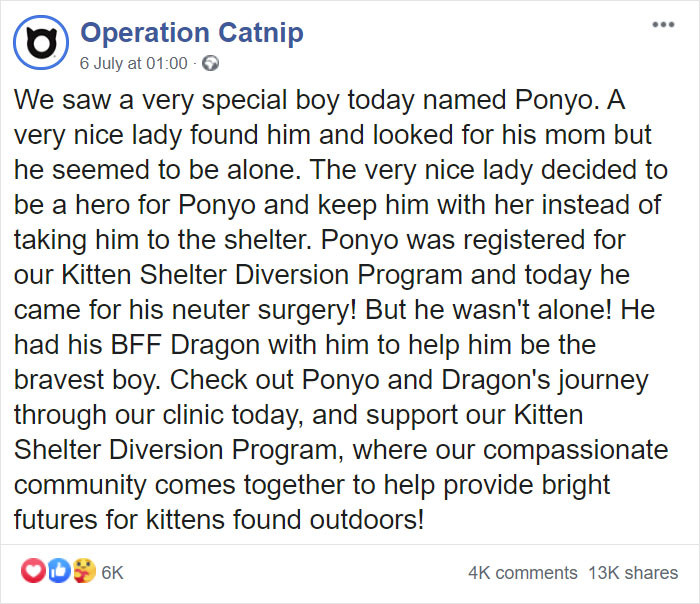 Samantha and her family took the kitten, they named Ponyo in, determined to turn his life around as soon as possible. To help make his transition from outdoor life to indoor life smoother, Samantha’s daughter got him a soft toy in the form of a dragon.

Cats don’t usually bond with soft toys like dogs do, though there are exceptions, and Ponyo proved to be one of those exceptions. He fell in love with his inanimate friend right off the bat. 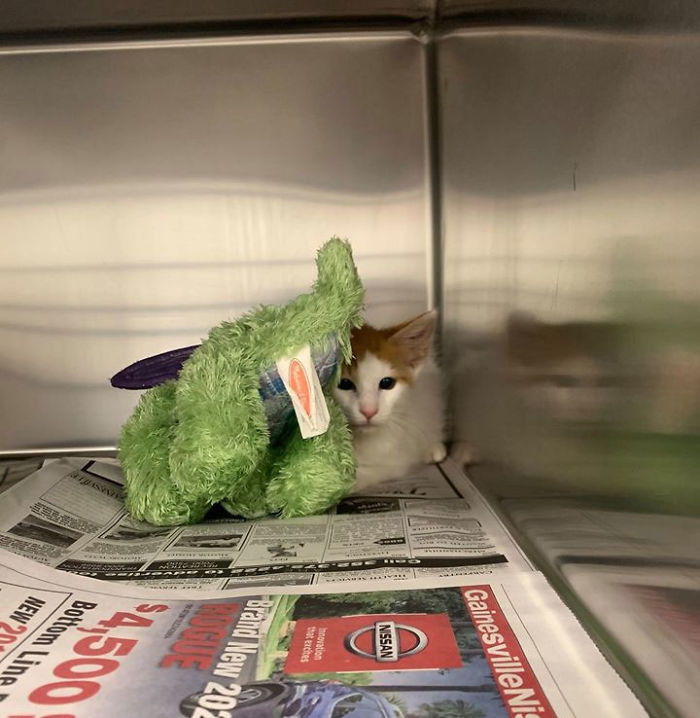 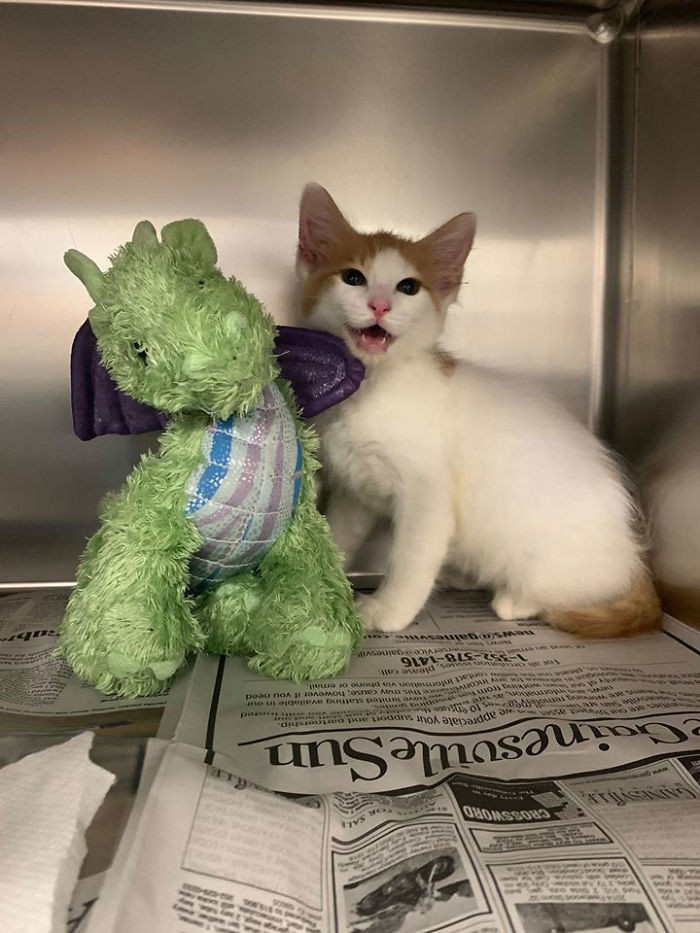 Seeing how much Ponyo had fallen in love with his dragon, when Samantha took him to the vet she brought along his new friend, and it worked like a charm.

–A stray cat follows her everywhere she goes, soon she finds out why?

“My daughter Violet spent a while picking out the perfect friend for him to sleep with and settled on Dragon,” Samantha says. “He sleeps with Dragon every night and spends a lot of his time dragging him around the house!” 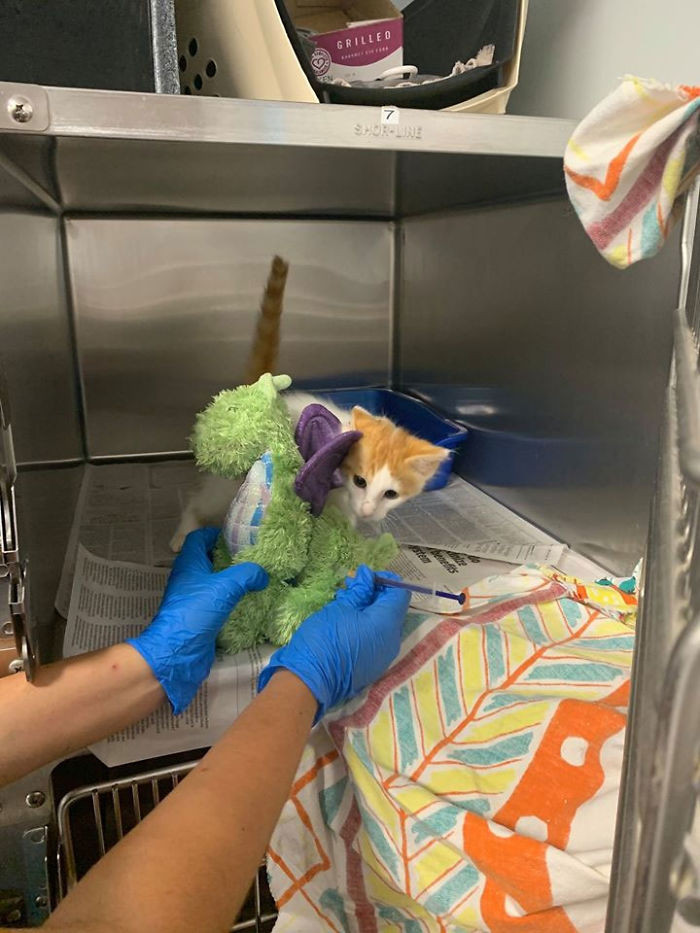 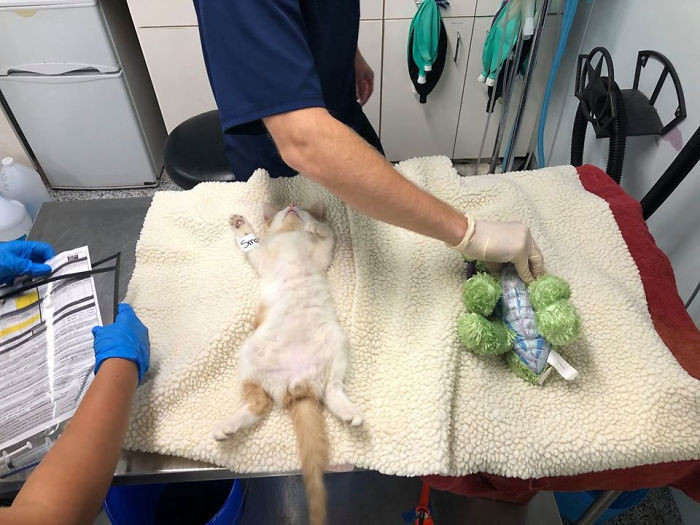 When Ponyo had been neutered, his family realized he might get frightened going to the vet and being left on his own, so they thought it might help him become braver by taking his toy friend. The firm friends were taken to Operation Catnip, a spay-neuter association that works mainly with stray, free-roaming felines.

When staff at the clinic saw Ponyo and his friend they were delighted. They saw right away Ponyo’s toy made her feel more secure as he adjusted to his new surroundings, they they allowed Ponyo and his toy to remain together throughout the procedure 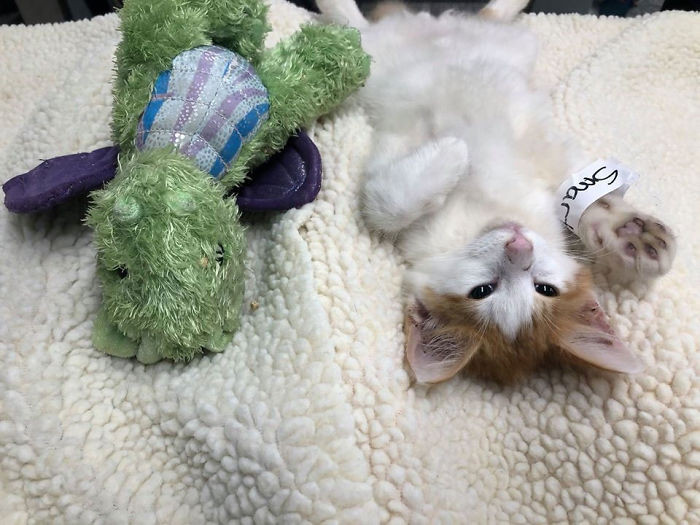 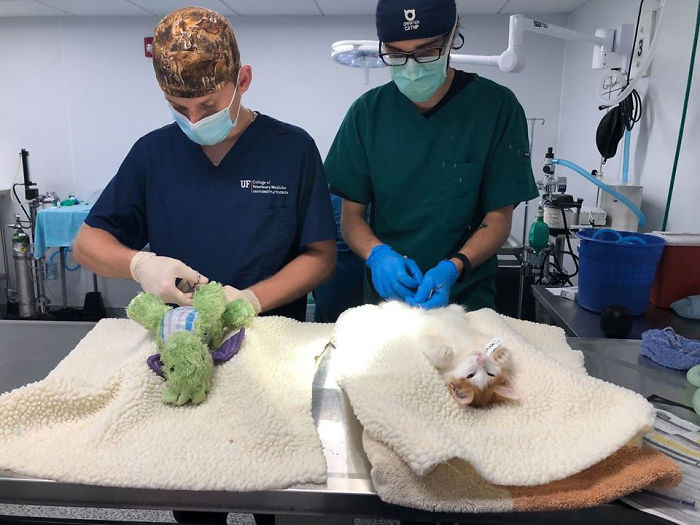 “Ponyo is a happy and healthy kitten,” Melissa Jenkins, the Operations Director for Operation Catnip, told the reporters. “Thanks to his mom, who found him and took him into her home, as well as our Kitten Shelter Diversion Program, Ponyo has had access to important vaccinations and spay-neuter surgery which helped to set him up for a healthy life ahead.”

Operation Catnip’s staff felt it would be good to send the stuffed toy through the same procedure as Ponyo. The fact that the cat was nervous isn’t surprising: this is a life-altering procedure. But his best friend did everything that was expected of him — it never left his side! 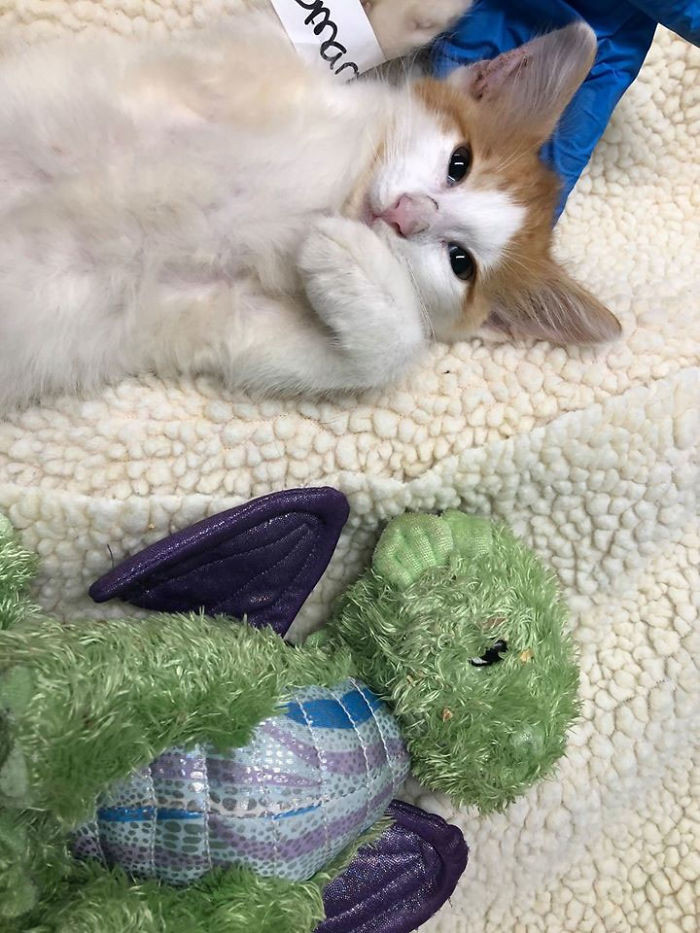 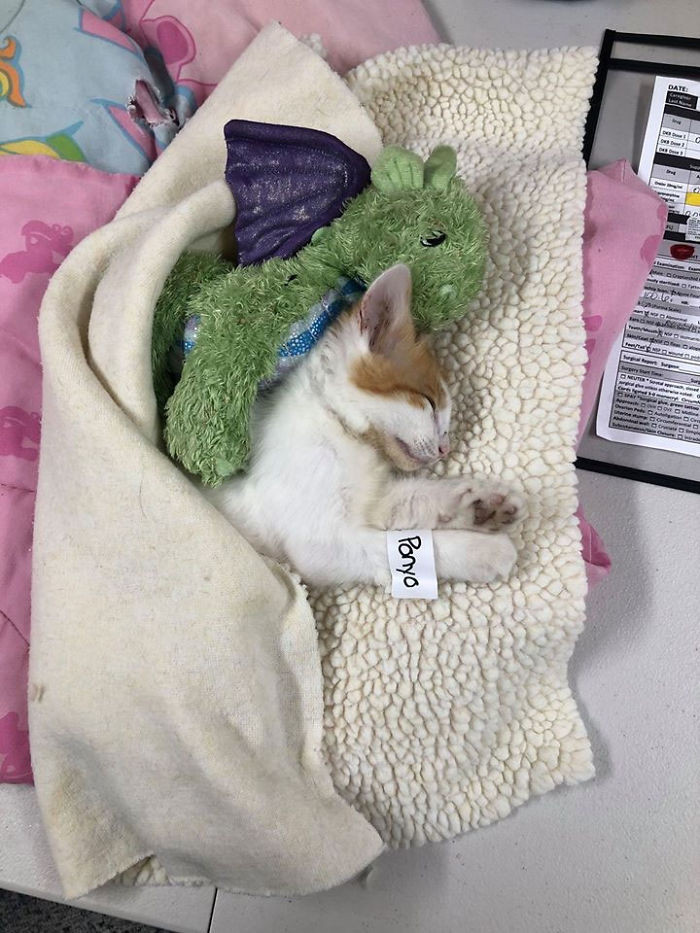 Jenkins stated that the Kitten Shelter Diversion Program is a cooperation between Operation Catnip and the public to keep defenseless kittens out of crammed shelters and enable them to start new lives in new homes.

“When members of the public find kittens outdoors, we encourage them to foster the kittens in their home rather than take them to shelters or rescues, which are already very full, especially at this time of year, and which don’t always have the capacity to help with the surge of kittens,” Jenkins clarified. 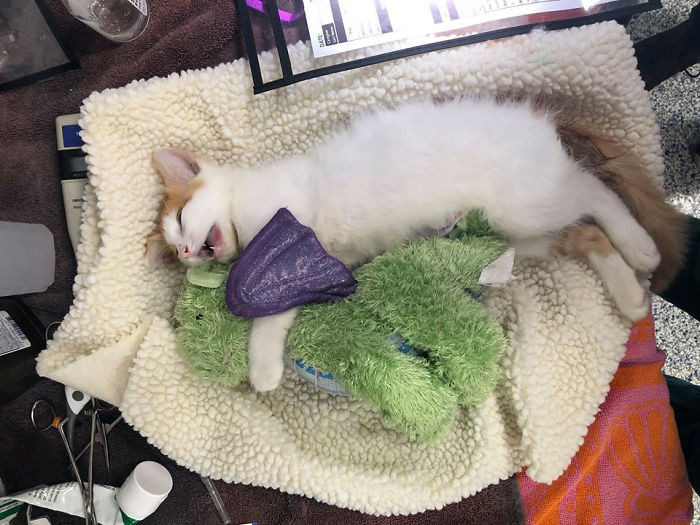 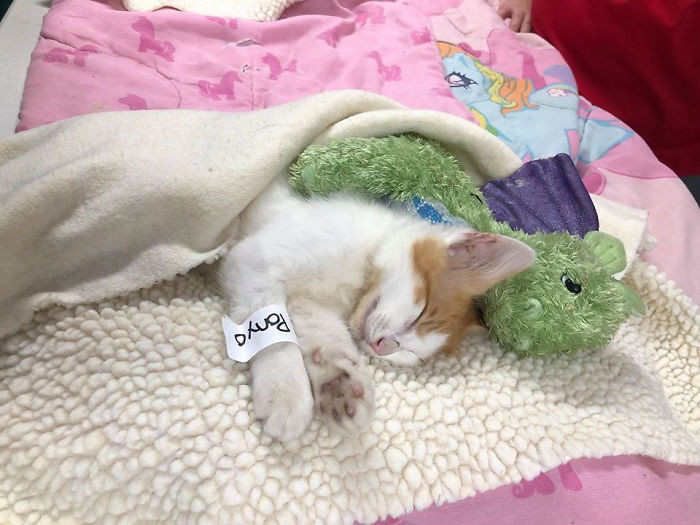 “Operation Catnip provides support by way of supplies and veterinary care for the kittens, and once they ‘graduate’ from the program (have their spay-neuter surgery), we ask that those caregivers then take on the responsibility of finding them homes!”

“In addition, we ask that the caregivers are very thorough about getting the whole family fixed — we want them to bring us the mother cat for sterilization too, as well as any other unaltered cats from the area where the kittens were found,” Jenkins explained. “We can even loan out humane live traps to them to catch any cats that are too feral to pick up by hand. It’s critical to ending the cycle of reproduction for that group and making sure no more kittens are born to them next year!” 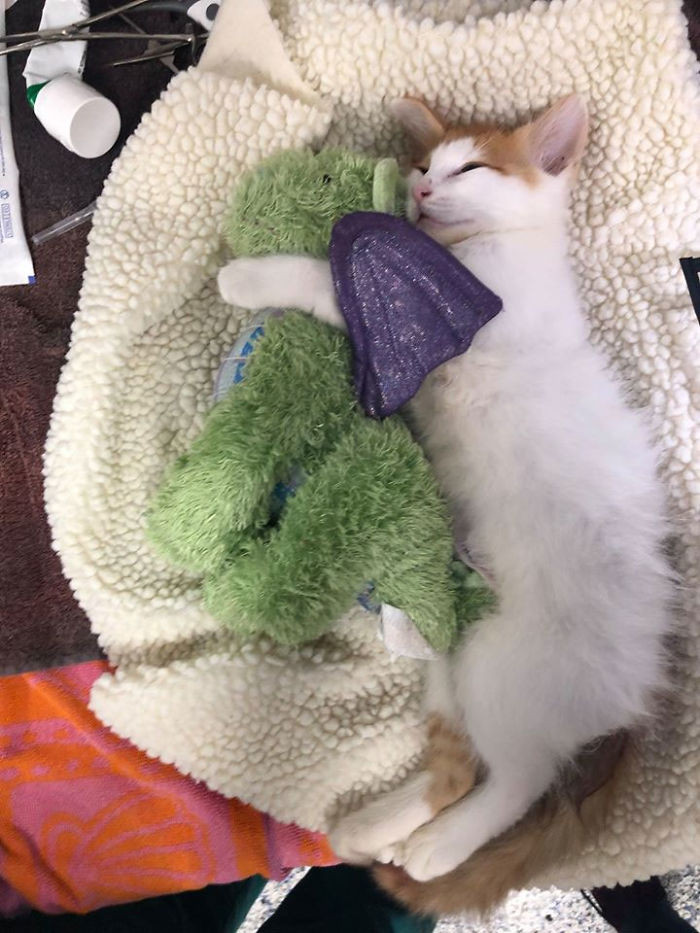 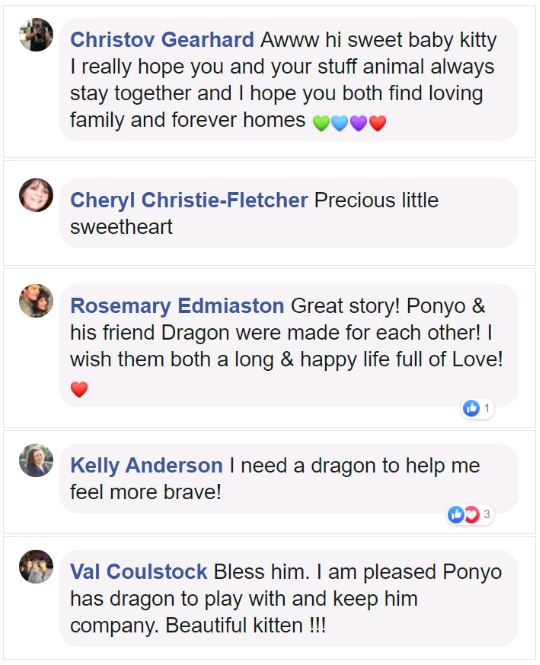 “Ponyo was found outdoors in the neighborhood, and his mom, Samantha, searched for a mother cat and siblings for several days, but never located any others. Ponyo ended up working his magic, and they decided to keep him themselves, using the Kitten Shelter Diversion Program to start his new life on the right foot!”