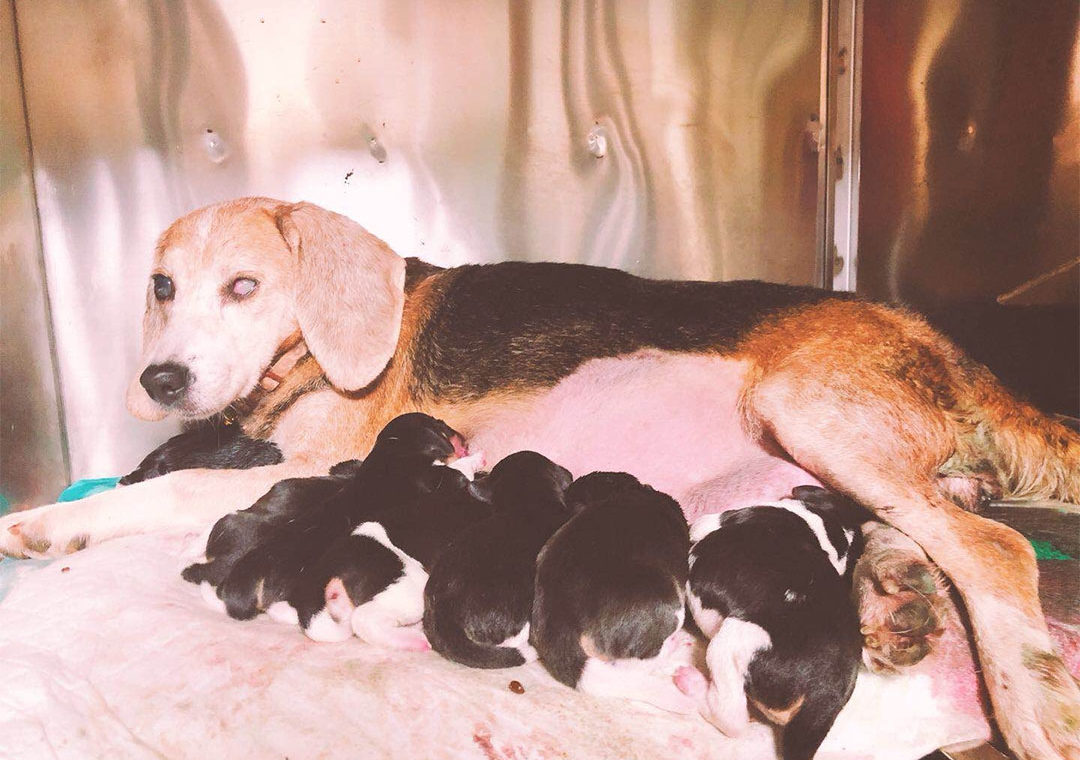 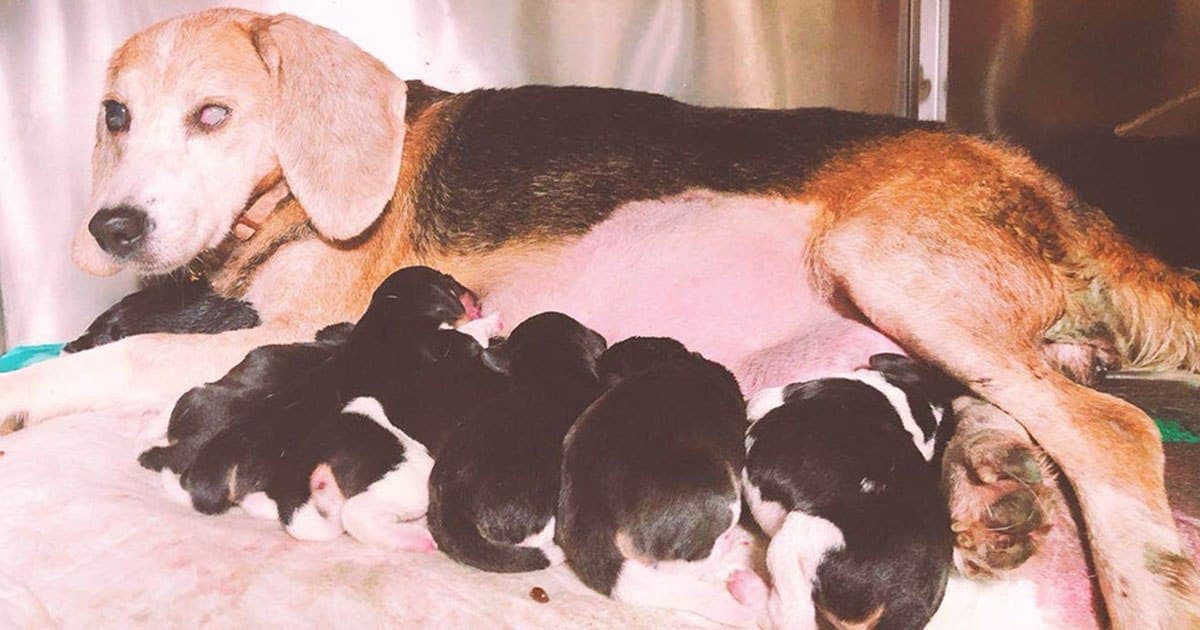 Today, many people and organizations fight for the rights of animals around the world, however, there are still places that treat them as objects. In many places, animals are used by industries and laboratories, for research purposes or to test their products.

For this reason, there are foundations and organizations that are dedicated to rescuing and releasing dogs that are trapped in such establishments or other situations.

A clear example is that of an animal rights organization that rescued several animals from a laboratory in the city of Cheng Du, China.

Blind dog is released from a laboratory 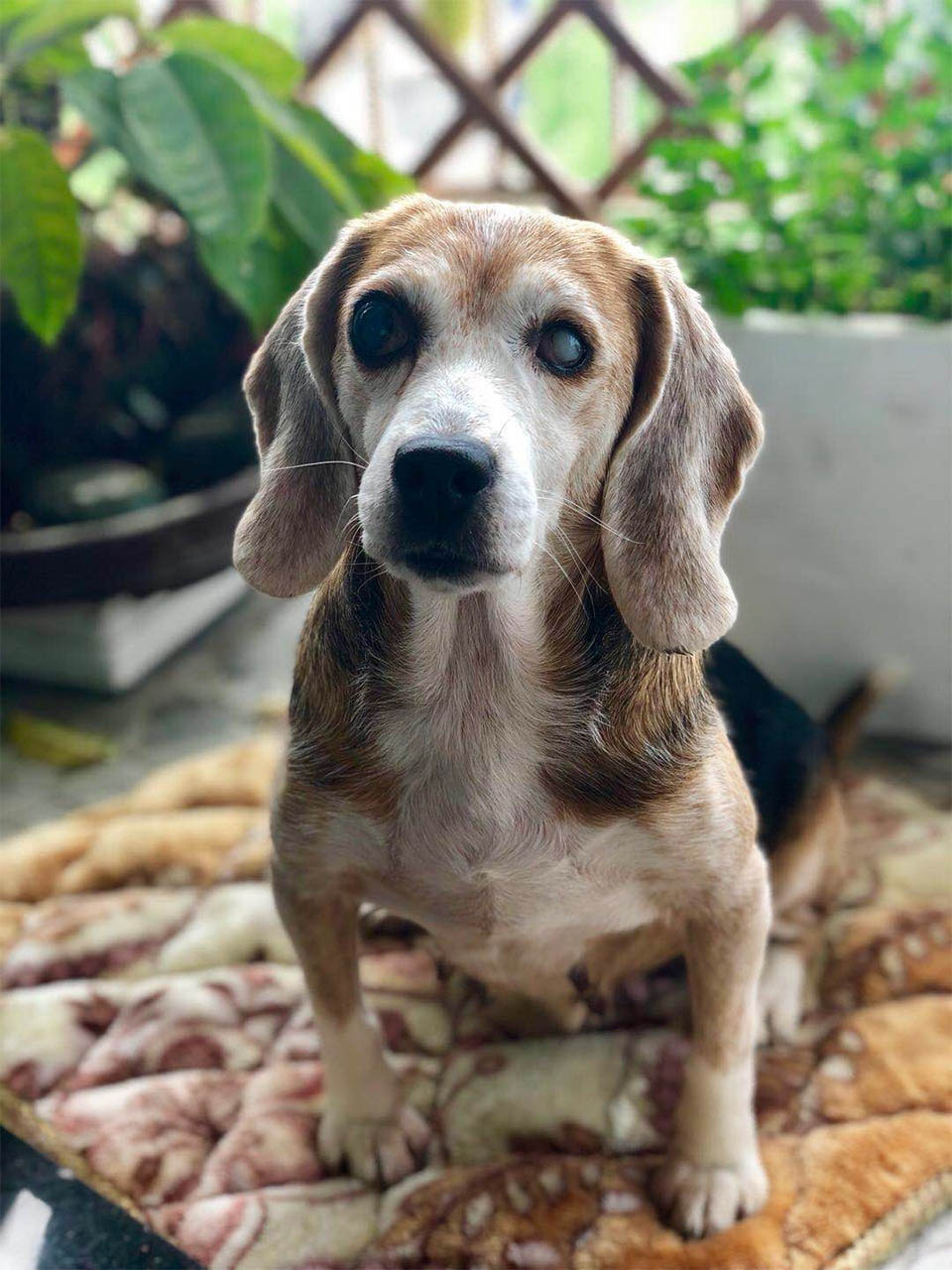 The organization called Rescue + Freedom Project , based in California, United States, rescued 17 dogs, among which was María, a 10-year-old Beagle, who had spent her entire life in the laboratory and did not know what it was. live Free.

She did not know what it was like to have a home , having lived in a steel cage all her life. She was sick, old and blind, apparently, the experiments carried out in this place left the dogs blind and traumatized. 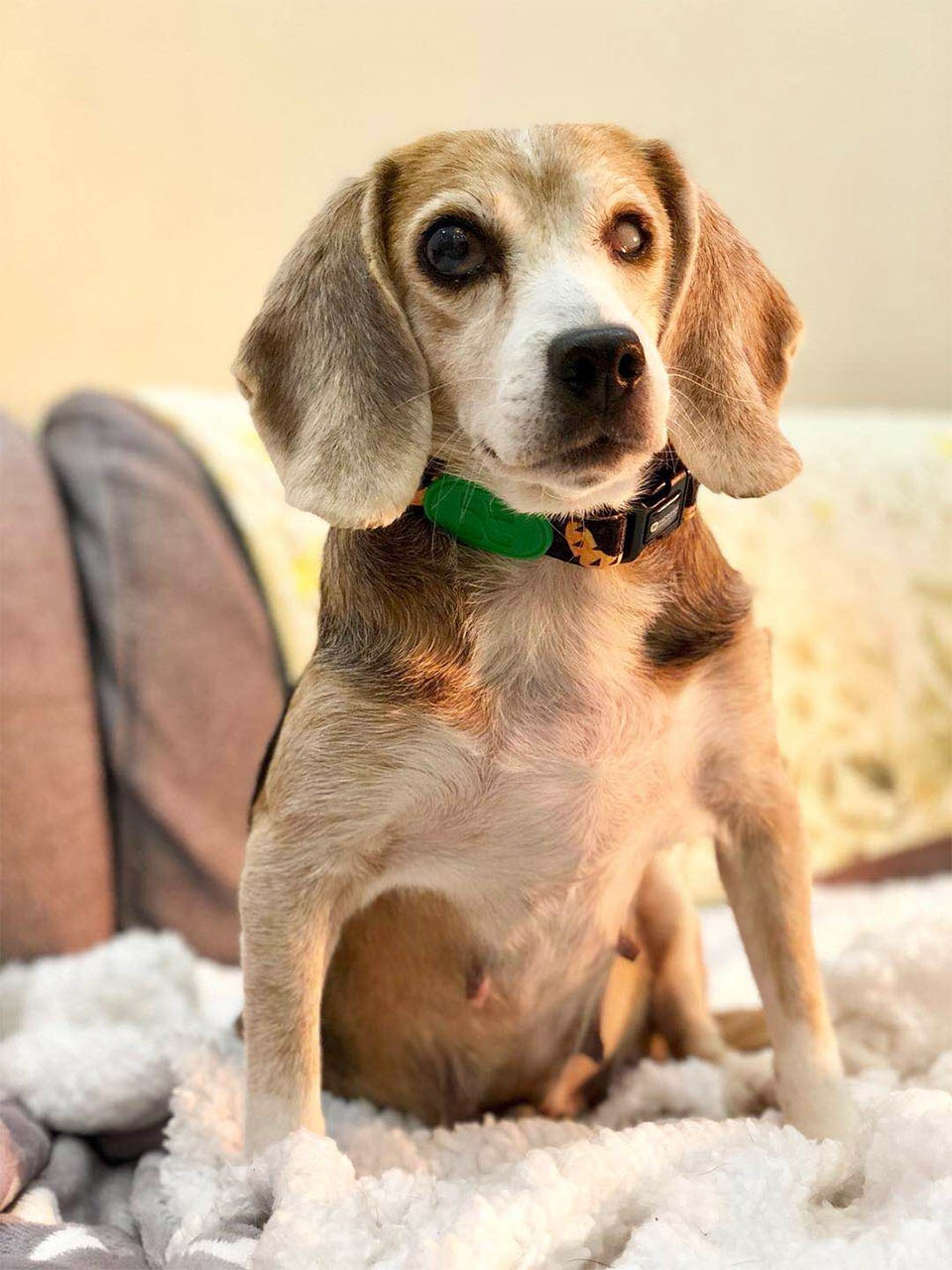 The dog was not the only animal rescued from the terrible place that had poor eyesight and was in poor health.

Shannon Keith, President and Founder of the Rescue + Freedom Project , told The Dodo :

“I can’t say for sure, but because of her body I could tell that she was used as a breeder.” 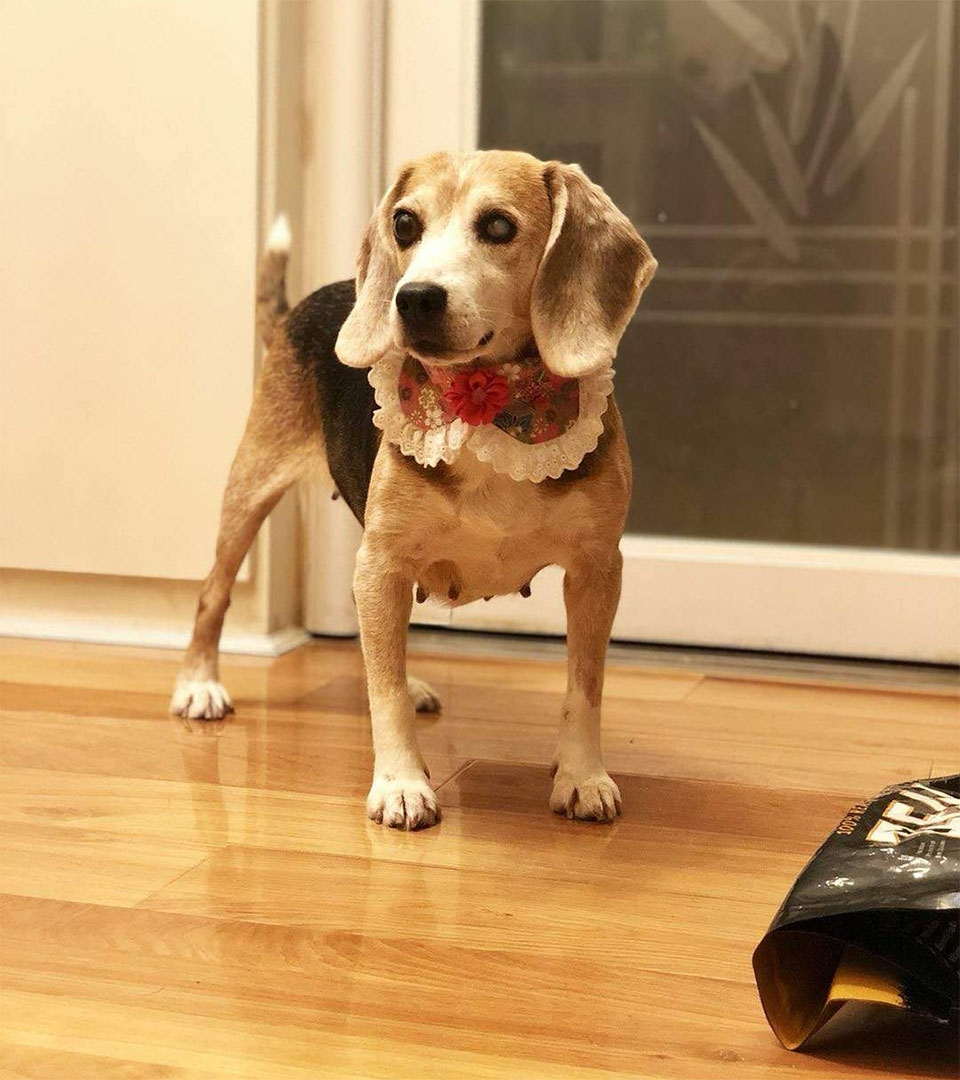 It is also believed that Maria was used to study a type of glaucoma, as she suffered from this disease, but everything indicated that it had been caused. Many of the other dogs also had the disease, but some were more severe, requiring surgery.

“Several of the dogs in that facility were blind, or had horrible glaucoma and we had to remove their eyes because they were in so much pain. That is not a coincidence, it is obvious that it is something that they did with them. 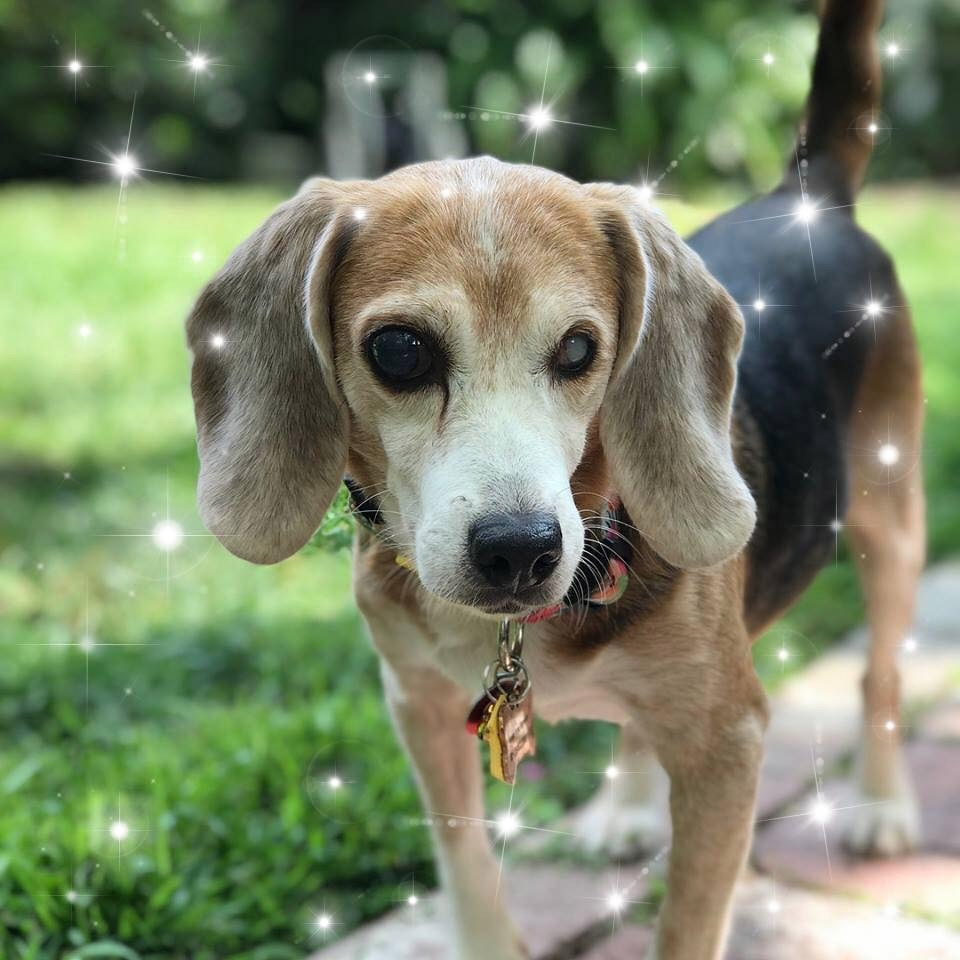 Luckily, the laboratory decided to release Maria, because since she was very old, frail and blind, she was no longer very useful to them. In general, these types of companies tend to release the dogs when they are very worn out, considering them little useful for their investigations.

That was how the local rescuers took Maria and the other dogs to a veterinary clinic, all of them were psychologically marked by their experiences. 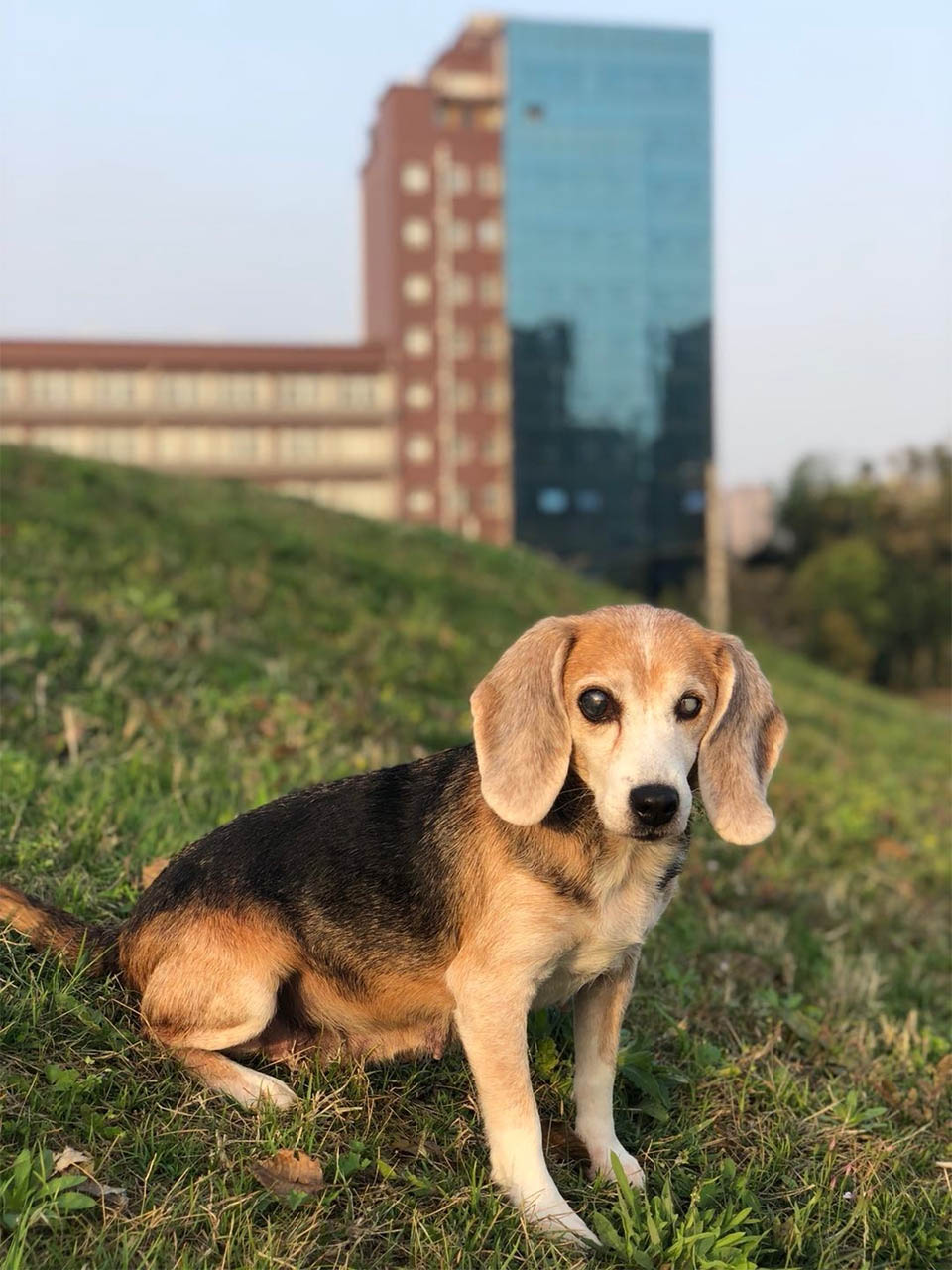 «Maria, like many laboratory survivors, walks a lot and walks in circles. It is devastatingly sad, but we know that in time he will be fine and he will get over it. “

In China some people are not very fond of pet dogs and if they get one, they don’t want it to have been rescued from a lab. Because of this, finding foster homes for the dogs would be a problem, so rescuers contacted the Rescue + Freedom Project for help. 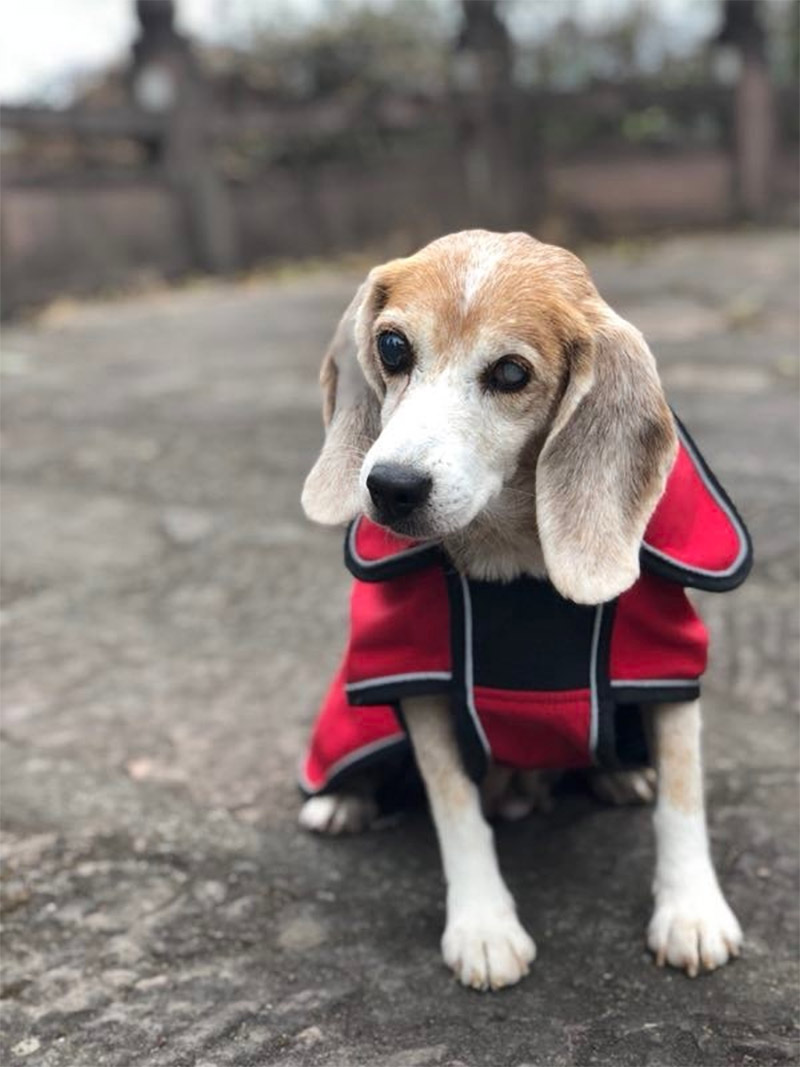 The organization did not refuse and helped in the process, even organizing a trip to bring the dogs to the US and find them a permanent home. But, in the process, they faced another problem. Maria was pregnant and could not travel with the others in her condition.

“We had no idea, and the lab didn’t tell us. She had to stay behind and have her cubs in China. Our volunteers from China organized a foster home for her to have her babies. 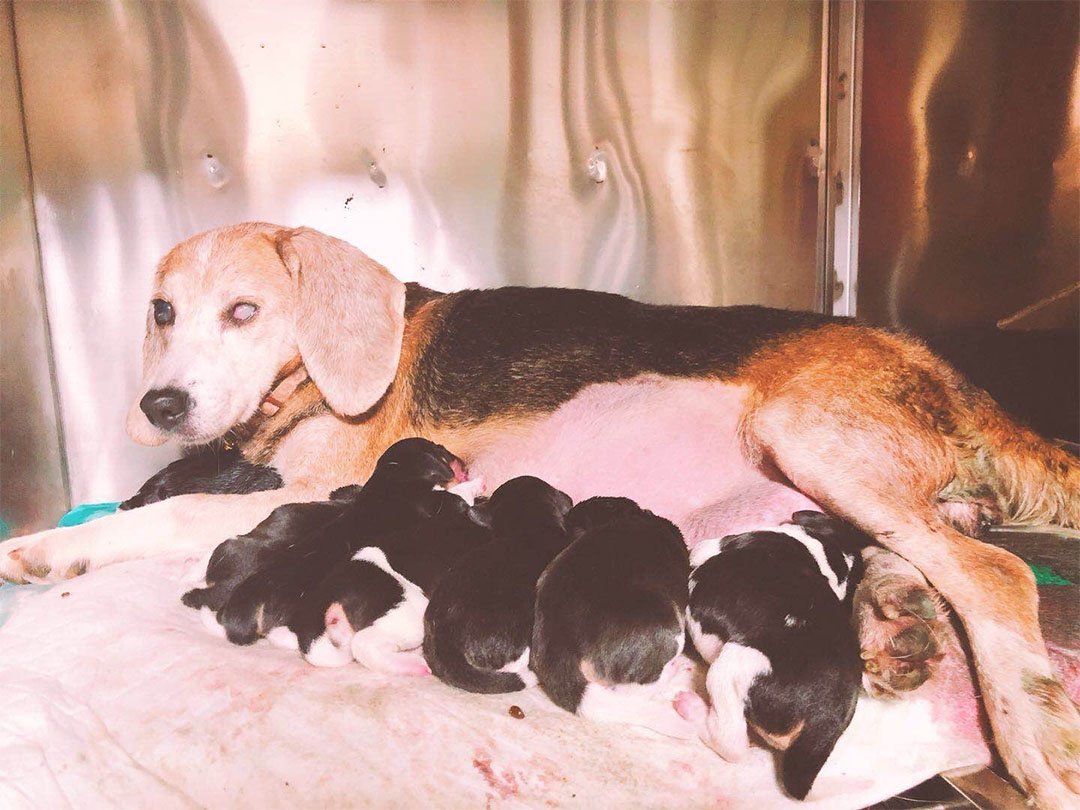 Fortunately, Maria was able to finish her pregnancy without any problem, and although one of the puppies sadly died, the other puppies were born strong and healthy.

In total there were 6 puppies left, and soon the luck for two of them changed; they quickly found a forever home with good families in China.

“She was an amazing mother. It is surprising for everything that has happened: growing up and living in a cage in a laboratory and being tortured. The fact that she could have this litter at such an old age, be blind and take such good care of them, is incredible. 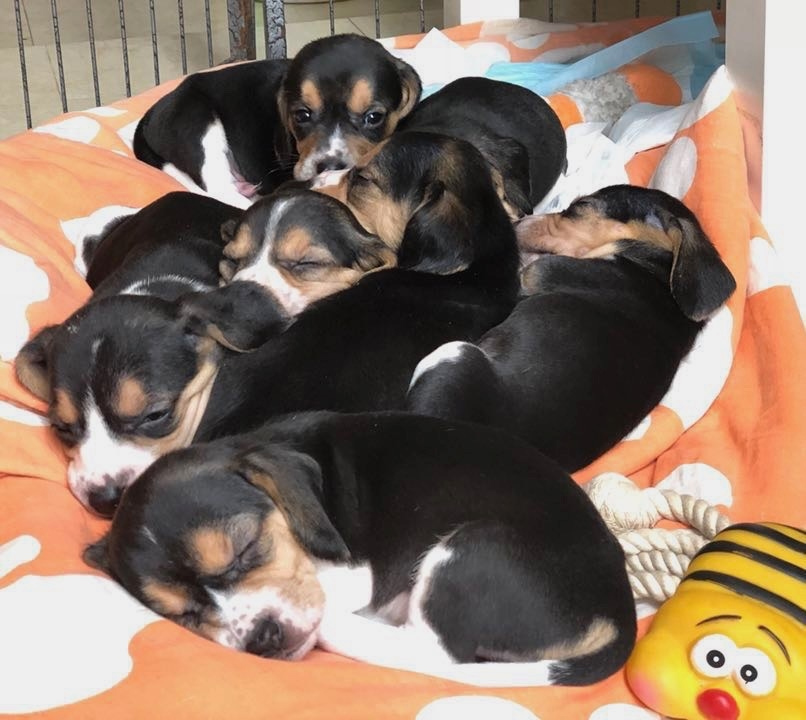 The other four cubs, Klyde, Oliver, Bessie and Lily, flew to Los Angeles with their mother, where they all went to foster homes. It didn’t take long and many people became interested in puppies, so everyone was able to find a home where they can grow up and know the love of a family.

Months later, Maria found a forever home with a dog named Mini who was rescued from the same lab.

They now live together in Anaheim, California. Her family says that Mini and Maria have changed a lot since they adopted them in 2018. From two little beagles, isolated by blindness with no idea how to walk around their environment, now they are both full of confidence, and their individual personalities continue to emerge.

Mini and Maria have their favorite nap spots all over the house, they get excited and ‘dance’ for food, plus they go on long walks to their favorite park and even play on the beach. 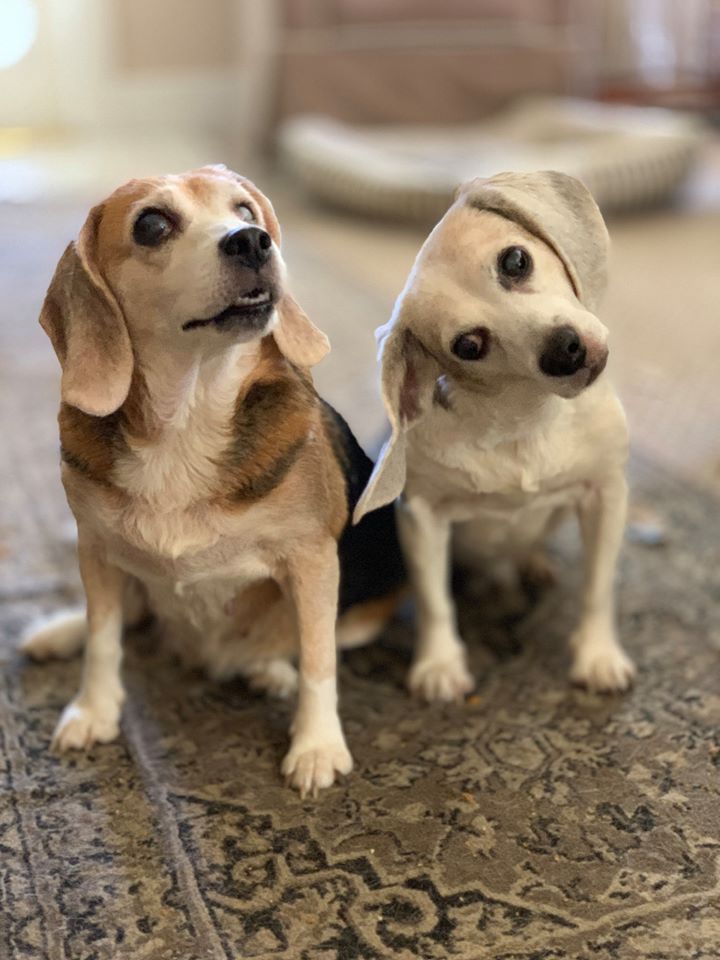 Both dogs are taken to the bedroom every night, to sleep wherever they want in bed, they take over blankets and pillows. They are never far from each other and when nervous or upset they always snuggle together.

Luckily, Mini, Maria and their cubs are safe, but the organization assures that in many places they still continue to exploit animals in experiments. 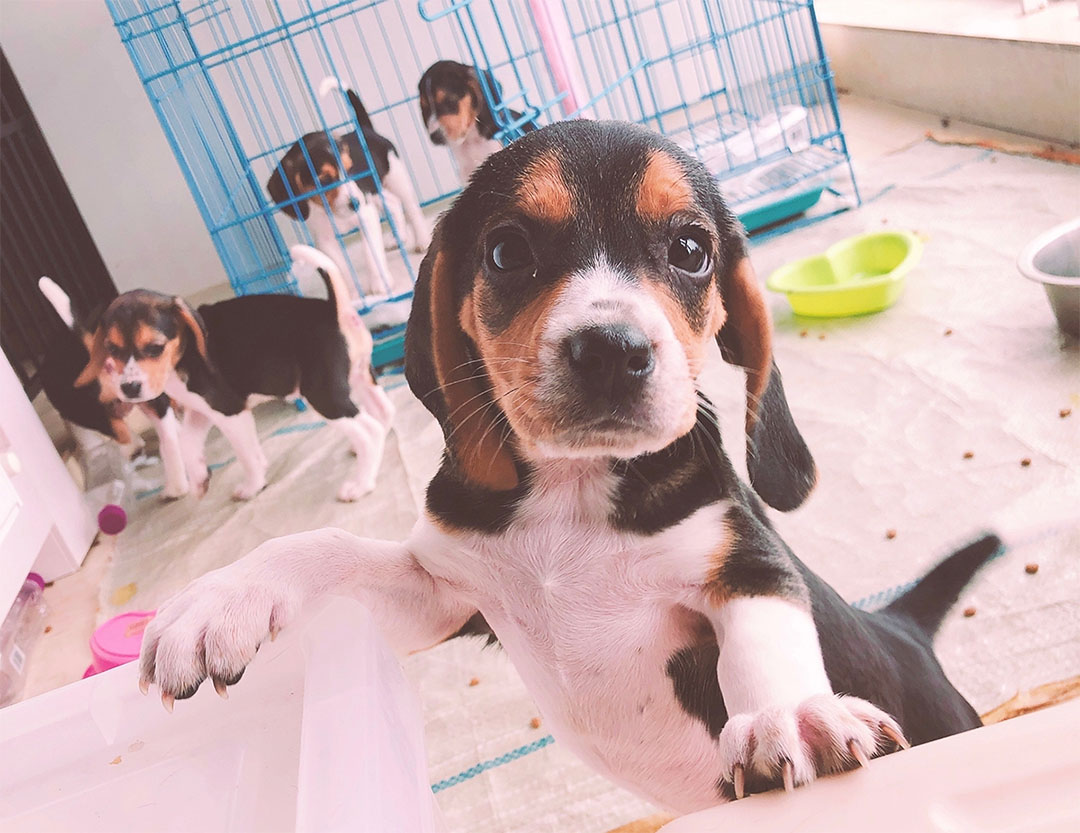 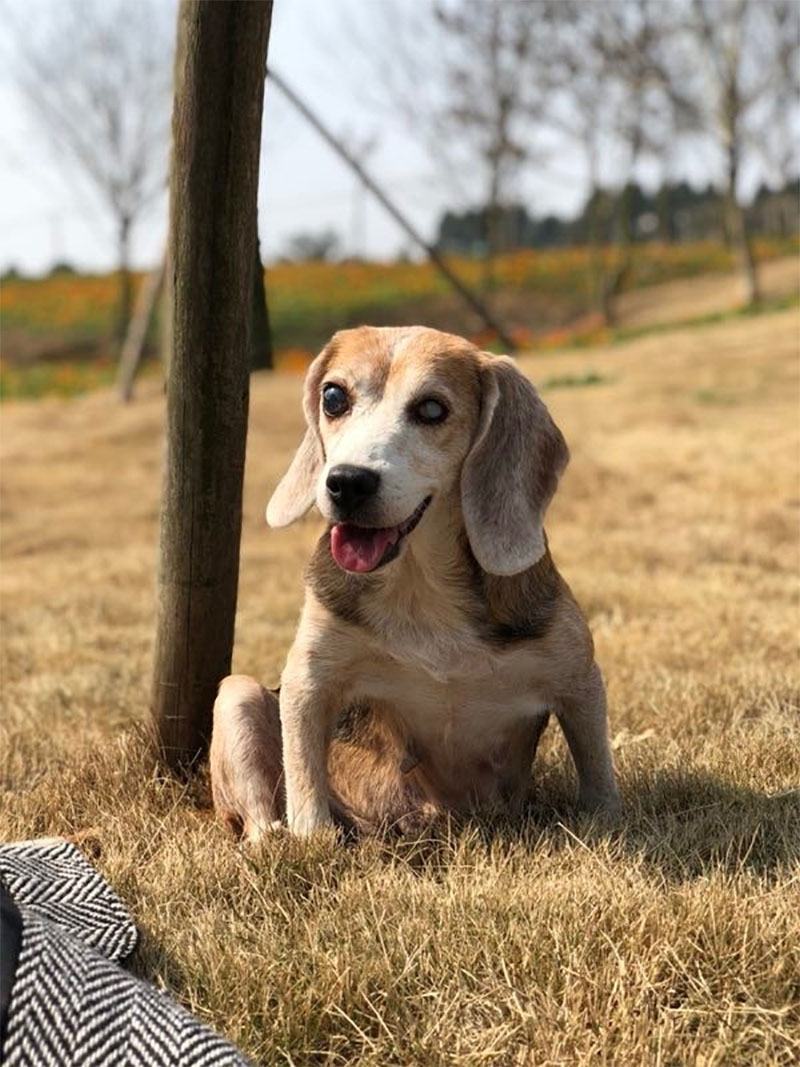 And it is not only in China or the United States, but many other countries have these inhumane practices.

“People can do their part by buying without cruelty. The fewer people who use animal-tested products, the closer we can get to a world where animal testing will stop. “