Cat And Baby Have Exceptionally Adorable Interaction With Window Washers 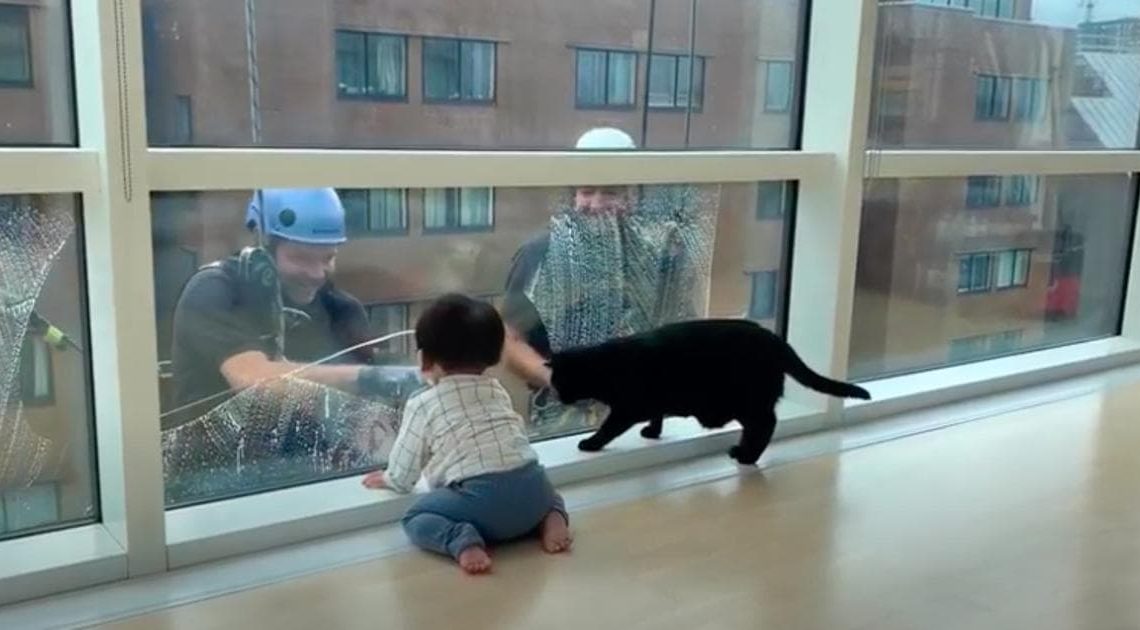 Every now and then the internet is graced with sheer and utter adorableness in the form of a video. These videos could be anything from a little girl singing along to her favorite song, a baby and a dog taking a sweet nap together or anything and everything in between. One of the latest viral videos at the moment is a clip of a baby and a cat having a cute interaction with a set of window washers. The video has quickly spread around the world thanks to the powers of the internet, capturing the hearts of millions.

There’s probably nothing cuter in this world than getting to witness the beautiful bond between kids and their pets, and that is exactly what viewers can watch in a video that has been taking the world by storm. In the video, a tiny baby is seen crawling alongside the beloved pet cat as the two look out the building’s huge windows. The view is breathtaking, but what is even more intriguing to look at is the set of busy window washers who are hard at work cleaning the glass of the giant windows.

Although the video was originally uploaded in October 2019, it has found a resurgence with people around the world thanks to a newer upload in March 2021. The baby and the cat in the video were completely in awe of the workers who gingerly scrubbed and washed their windows clean. In any case, this video is sure to be a treat for animal lovers.

Just like how the two of them couldn’t get enough of watching their window get cleaned, people all over the world have been swept away by their undeniable cuteness.

A YouTube user by the name of Rina Takei has been uploading videos of her cats having a fun time watching the window washers do their job since February 2015. It wasn’t until a few years later that her baby began appearing in the videos as well. As her baby grew up, the child’s participation in interacting with the cats and window washers grew. The baby and both of the cats thoroughly seemed to enjoy the washers’ frequent visits.

The woman also has a blog dedicated to showing off her adorable adult cats, Guinness and Pimms. One cat has a shiny black coat, while the other one is orange and has slightly fluffy fur. According to the blog, Guinness is a sweet-hearted boy who was born on Oct. 21, 2014, and Pimms is sweet and curious, although sometimes naughty, and was born on June 30, 2016. Takei’s Instagram account also has plenty of precious photos and videos of her baby, Nagi, with the two cats.

In a video uploaded to Takei’s channel in October 2018, Guinness and Pimms sat right against the window to watch the window washers clean it. They are intrigued by the way one of the cleaning tools slides across the glass so effortlessly, and they move their entire heads to follow the tool’s movements. Guinness even try attacking the window to get the tool as he presses his paws against the glass, but his efforts were to no avail.

The video that has been captivating viewers for years and has recently found a new resurgence was originally uploaded to Takei’s channel on Oct. 3, 2019. A shortened clip of the full-length video has helped breathe new life into the precious moment, as it was uploaded to another YouTube account on March 8, 2021. Totaling the number of views from both versions together, the video has been seen over 14.6 million times.

At the beginning of the video, Nagi and Guinness are enjoying their time together. Nagi crawls on the floor and Guinness sits near the cute baby. After just over a minute, the other stars of the show pop up. The window washers have smiles on their faces as they watch the baby and the cat observe them while they work.

While the two men are busy spreading soap and water across the glass of the window to get it perfectly spotless and clean, the baby and the cat are just as busy watching them in wonder. Nagi stays planted on the floor as he sits in observation while Guinness scratches his claws against the shiny glass. Even Pimms gets in on the action and joins his two friends. He takes a relaxing stroll across the camera’s viewpoint before finally situating himself in his own spot on the floor.

Nagi and Guinness move closer to the window. The window washers are thrilled with the company and show off their wide smiles as they continue carrying out their job. At the end of the video, the window washers happily wave at the two friends inside the building.