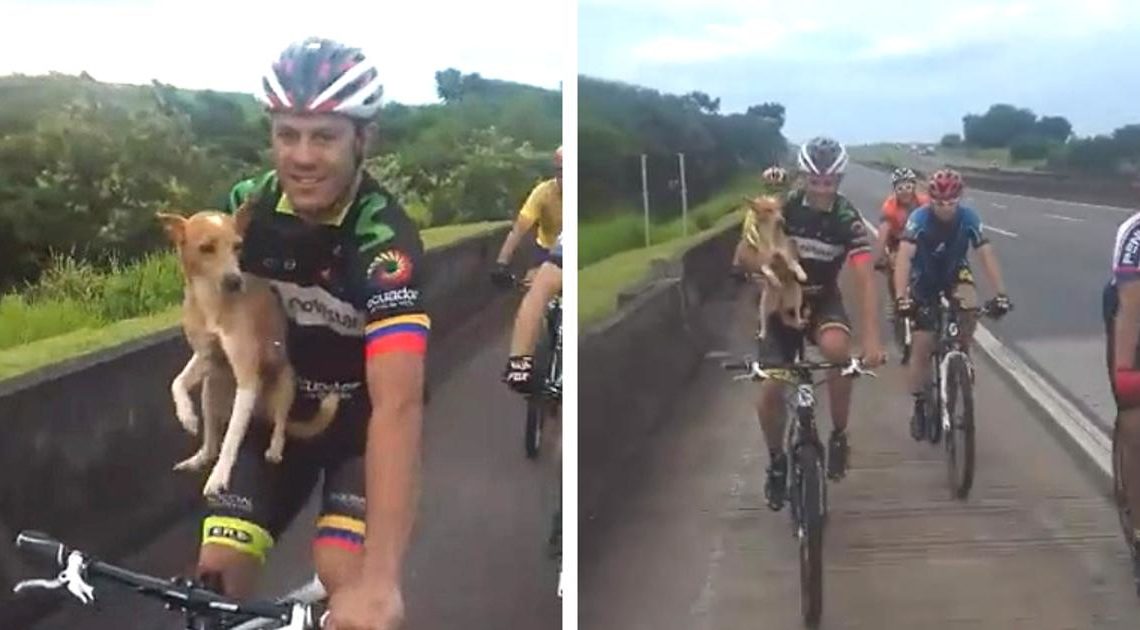 Eduardo Reis, an avid cyclist from Brazil, was training with his crew when he came across a young dog on the side of the road. So, he did what any decent human would do: He brought the pup along for the ride.

A flat tire is a common occurrence in the world of cycling, so Eduardo didn’t fret when one of his crew members popped a tire. However, it wasn’t long before Eduardo and his team realized they weren’t alone on the isolated road.

A young mixed-breed dog was lurking in the tall weeds near where Eduardo’s crew was tending to the flat tire. He was sacred and malnourished, but he perked up as soon as Eduardo called to him.

Eduardo knew he couldn’t leave his new friend to fend for himself in the wild. He held the dog in one arm while he steered his cycle with the other. He later named the dog Warrior. Check out this video of Warrior’s first bike ride:

This was more than just a fun ride for Warrior; he was on his way to start a new life. Eduardo fostered Warrior until he found a loving home for the dog. Eventually, Warrior was adopted by a wealthy family. We’re told that he’s living his best life in his forever home.

Warrior isn’t the only dog to have been saved by cyclists. Two men from Columbus, Georgia came across an injured Great Dane puppy on a recent trek. The poor puppy had suffered several broken bones and desperately needed medical attention. Jarrett Little and Chris Dixon coaxed the dog out of its hiding place with energy chews. Little balanced the dog on his back and cycled back to town.

Andrea Shaw, a Maine resident, was in town on business when she saw Jarrett Little carrying the injured dog on his back. She approached the cyclist and formed an instant bond with the dog. Andrea adopted the dog and named him Columbo.

Columbo needed several surgeries, but he eventually recovered from his injuries. He enjoys spending time on Shaw’s farm with his new family. You can follow Columbo on his official Facebook page.