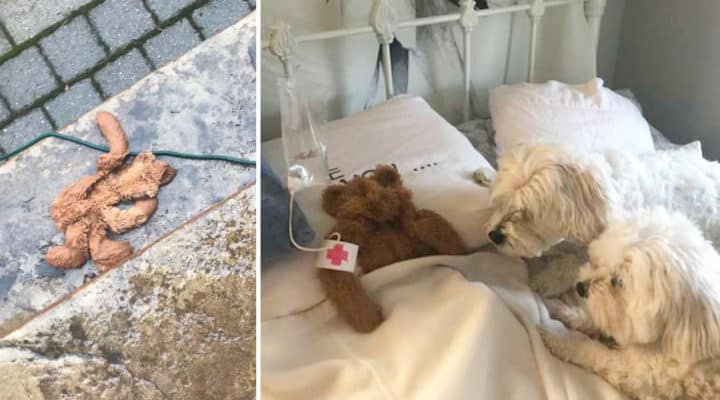 There’s nothing more upsetting for a dog than losing their favorite stuffed animal. It’s their best buddy, it’s their comfort blanket, and they are devastated when they are parted. For little Lucky, it looked like he was about to lose his beloved stuffed bear after a terrible storm threatened to tear them apart.

Lucky and his stuffed bear have been inseparable for the past six years. Despite how Lucky has grown and got older, and how his bear has become more ragged, he still loves it all the same. 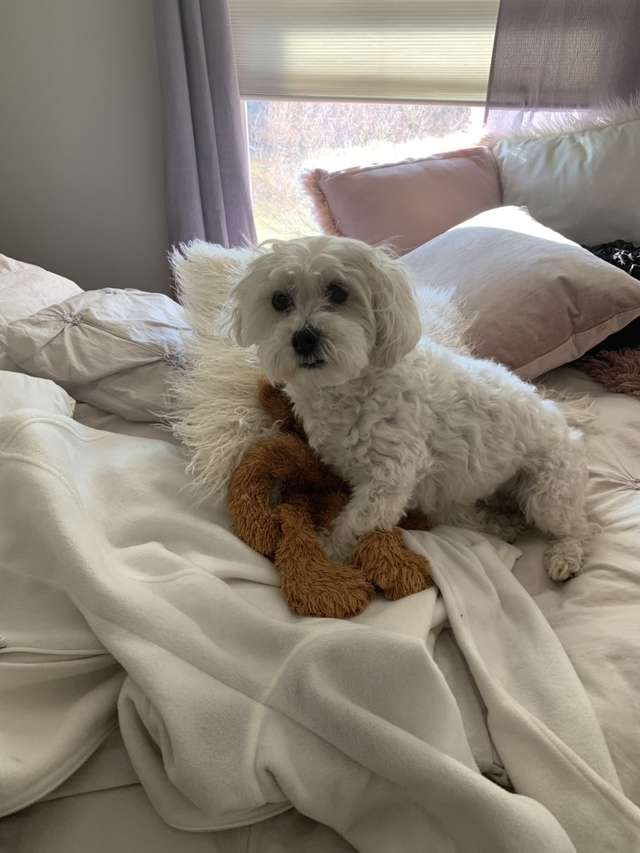 Lucky’s mom, Michaella Wallace, says, “It has no stuffing left in it anymore and it goes everywhere with him. He plays with it at all times. He protects it like it’s his own baby.”

However, one crucial mistake nearly cost Lucky his beloved bear. Lucky was let outside to go to the bathroom and took his bear along with him.

But somewhere along the way, Lucky lost his teddy bear in the darkness and as a storm drew close he was forced to go inside without it. As the storm hit, the garden was covered in snow.

The following morning, the snow had melted and Michaella Wallace’s dad went outside. He came across the bear in a very sorry state. Things didn’t look good… 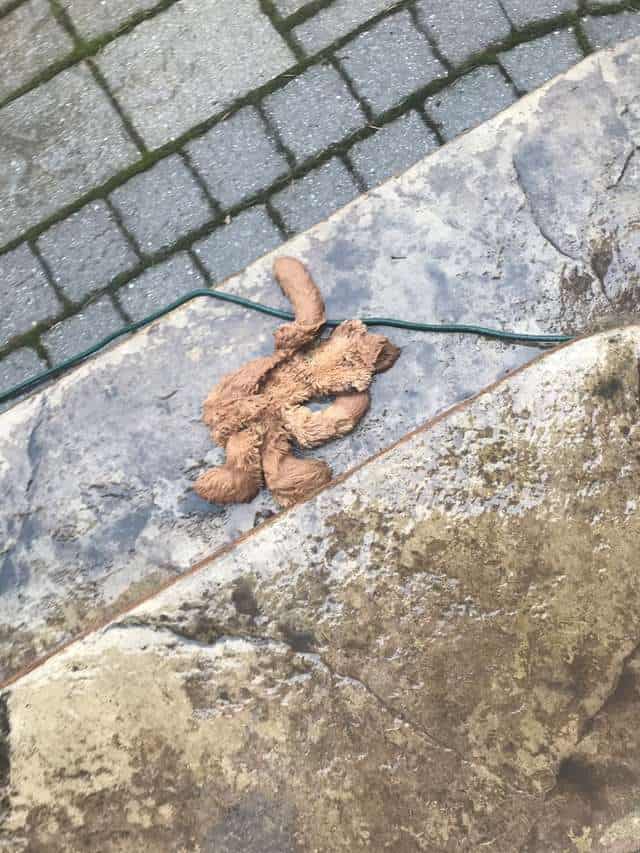 Despite its sorry state, Wallace’s dad knew how much the bear meant to Lucky, so he refused to give up on it. 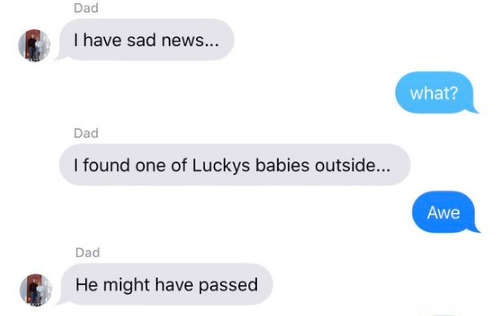 Bringing the destroyed toy inside, he started attempting to rescue it. 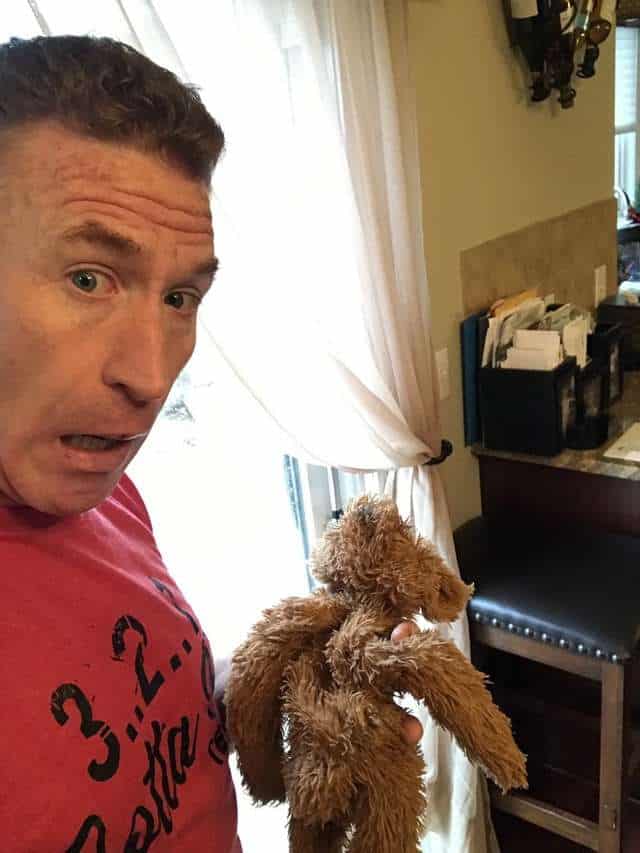 Wallace’s dad kept her updated on teddy’s progress throughout the day.

Thankfully, hope was not lost. As a result of his care, Teddy started to make a recovery.

Wallace’s dad even set up a recovery room for the teddy bear. Teddy was comfily tucked up in its recovery bed, complete with an ‘IV drip’. As a result, Teddy could rest and get better.

Lucky and his sister Laci were even allowed in for a visit. 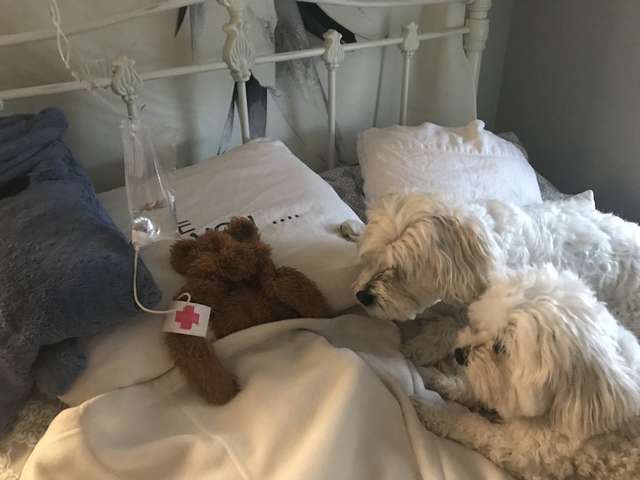 Thankfully, Lucky’s beloved teddy bear pulled through and is back in good health. Hopefully, the cuddly pair won’t have to worry about being separated again.

He is fully recovered and happily back with his protector.

Wallace’s dad’s hilarious and creative way of handling the situation isn’t a surprise to anyone who knows him. He often turns mundane matters into funny stunts like this. It sounds like we all need someone like Wallace’s dad in our lives. 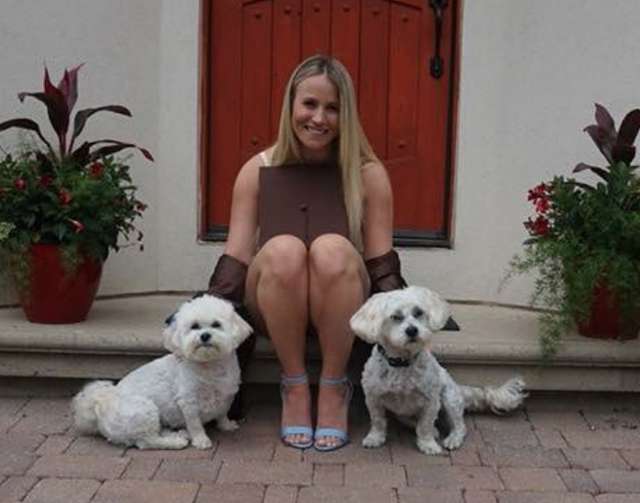 Similarly, it’s not just Michaella and her family who love her dad. Lucky and Laci are obsessed with him too.

Lucky and Laci love my dad and he is the same way towards them. Our dogs mean so much to our whole family and everyone who meets them adores them.

Thank goodness for dads! They always know how to save the day and make everything better.