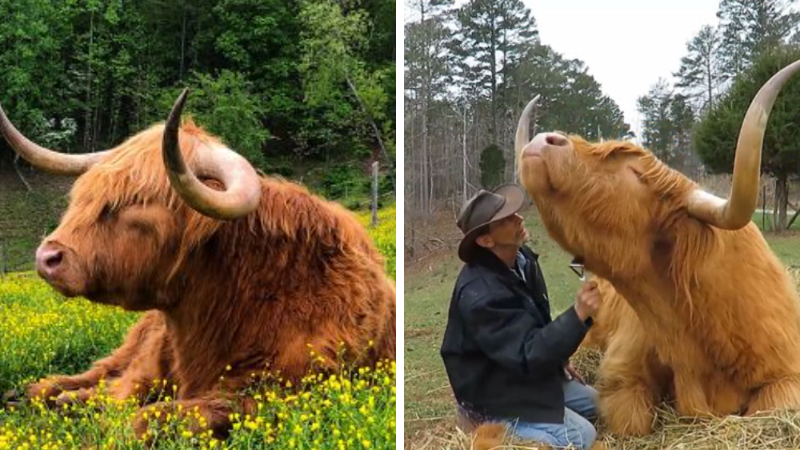 When you see this gigantic Scottish highland steer with flaming red fur and massive pointy horns, the word ‘gentle’ wouldn’t be the first thing that comes to mind. After all, the beast weighs around 2,000 pounds, which equals approximately 8-9 adult men. 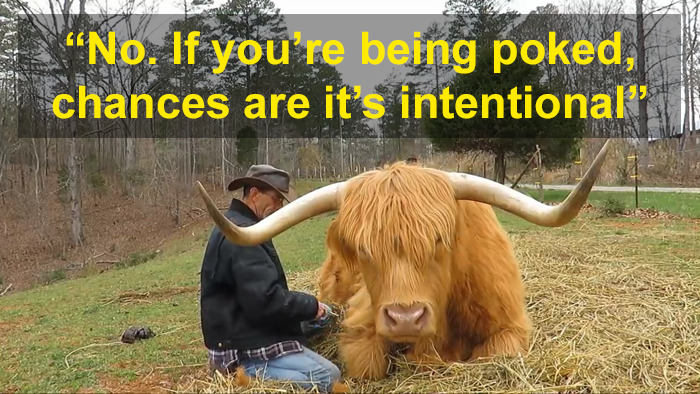 But the passionate farmer Marc Stewart of Thistle Do Farm in Bedford, Virginia, proves all the prejudice wrong. In a minute-long video, which has been watched more than 963k times, Marc explains that not only are highland cattle “one of the most docile breeds,” they are also incredibly smart.

The video shows his 9-year-old Highland steer Hamish peacefully clinging by Marc’s side as he carefully grooms him. “He’s getting the dangerous parts away from me,” says Marc, referring to the gigantic horns that would send chills down my spine if I was standing close to them, and tells him this is a sign of respect. So let’s meet the gentle giant Hamish down below in a video that challenges the ways we think of these incredible animals.

This is Hamish, a gentle giant Scottish highland steer that weighs around 2,000 pounds 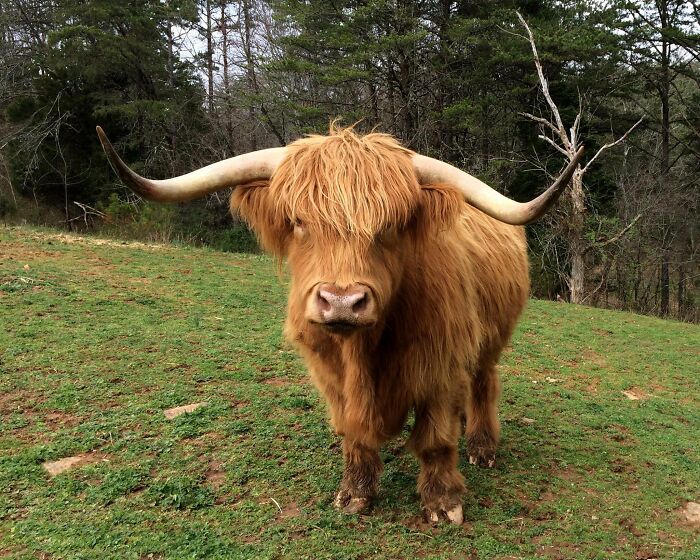 But according to the passionate farmer Marc Stewart, Hamish is one of the most docile cow breeds in the world 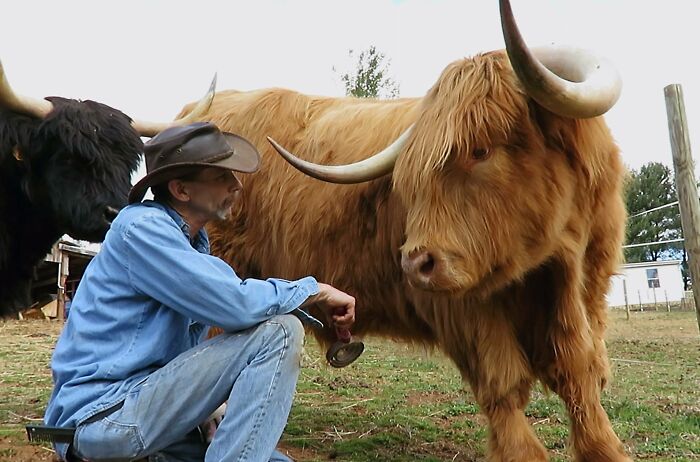 9-year-old Hamish, whose full name is—buckle up, everyone—Hamish Duncan McCallum Sandiland Stewart, came to live on Thistle Do Farm after a local farmer announced his retirement from raising Highland cattle with his son.

According to the Thistle Do Farm’s page, which is home to not one, but two Scottish Highland steers, Hamish and black-haired Kyloe, “knowing how much Hamish’s soon-to-be daddy loved Scotland, the farmer offered to let 10-month-old Hamish move to the farm.”

After the offer was accepted, Hamish “learned how to be a cow while his new daddy learned how to take care of one.” For over three years, Hamish was the sole Highland cow on the farm, but the farm keepers noticed that he would wander off at night in search of company and play. “We knew that needed to change,” Mark explained. 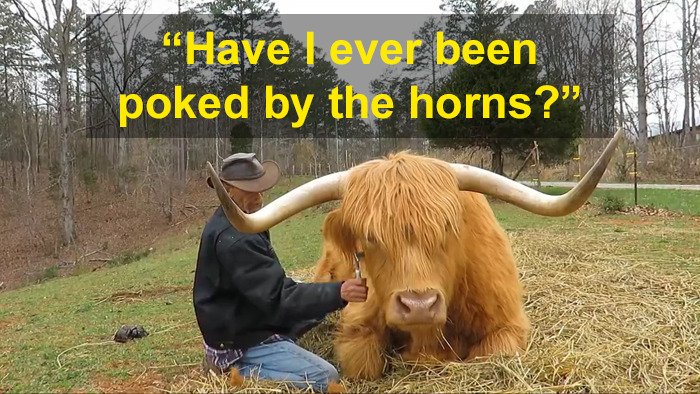 Thus, the Thistle Do Farm was joined by a smaller in size but just a few weeks younger brother. Kyloe Balloch Sandiland helped to “keep Hamish company and keep him out of trouble.”

Marc, who takes care of the Highlanders at the farm with his wife Kathryn, told BBC that “Hamish is easygoing, laid back and usually very calm and collected. He’s happy standing in the pond or laying in the shade under an old oak.” Meanwhile, “Kyloe is the consummate ‘little brother.’ Always getting into things he shouldn’t, testing fences, beating up gate panels or loose buckets, and his favorite, trying to get Hamish stirred up enough to push back.” 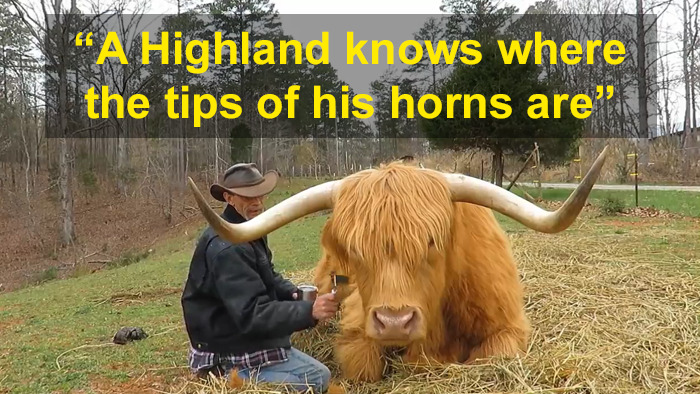 It turns out that Hamish and Kyloe are among Britain’s oldest and hardiest breeds of cattle. According to the Highland Cattle Society, whose patron is the Queen herself, written records of these gentle giants go back to as far as the 18th century. 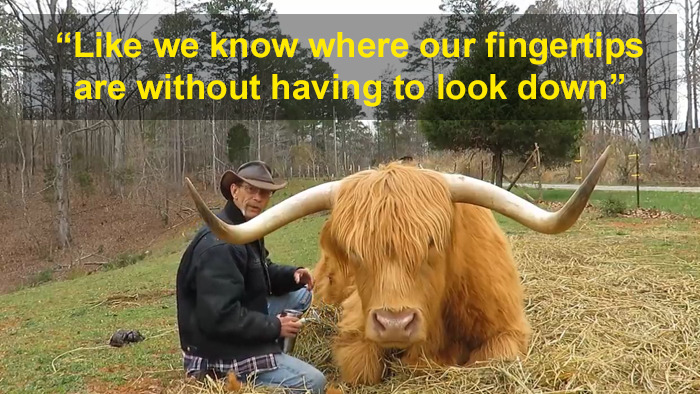 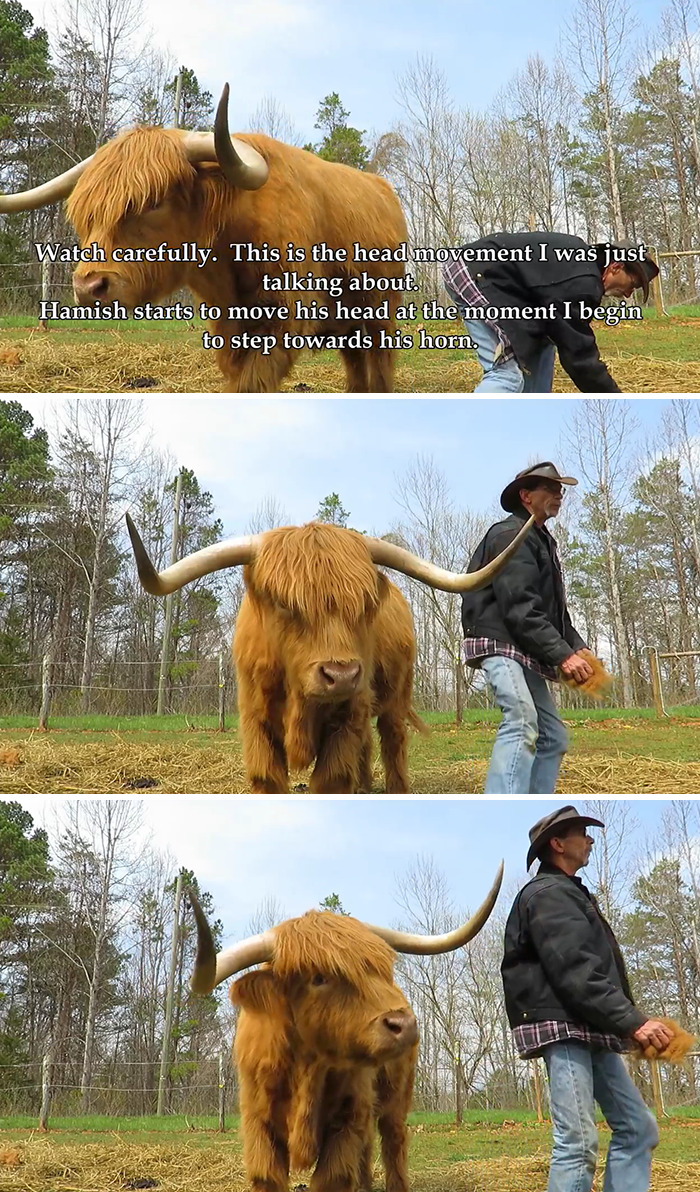 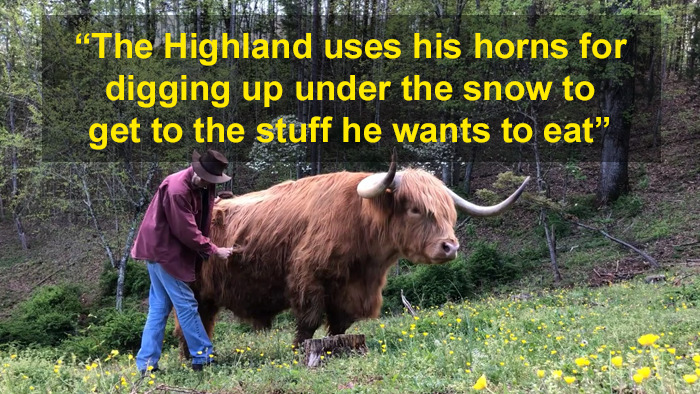 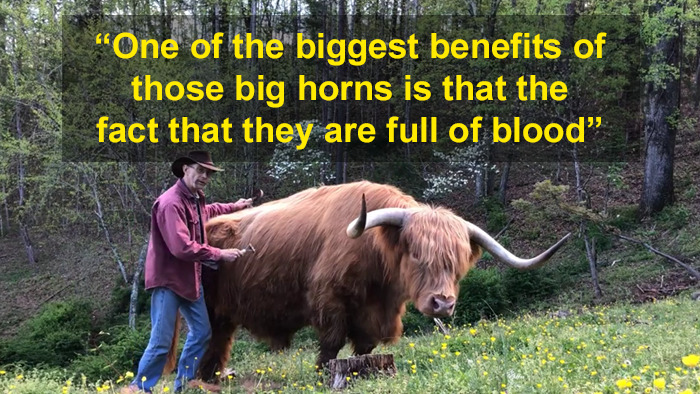 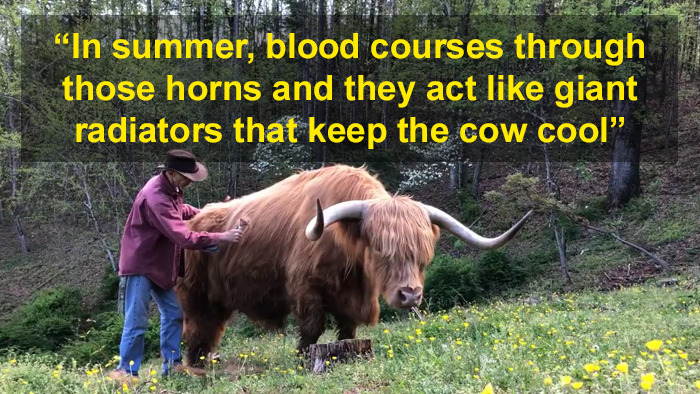 Just look at how adorable this gentle giant really is! 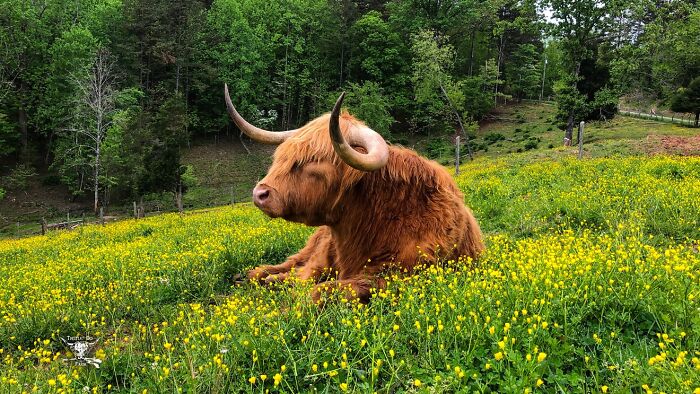