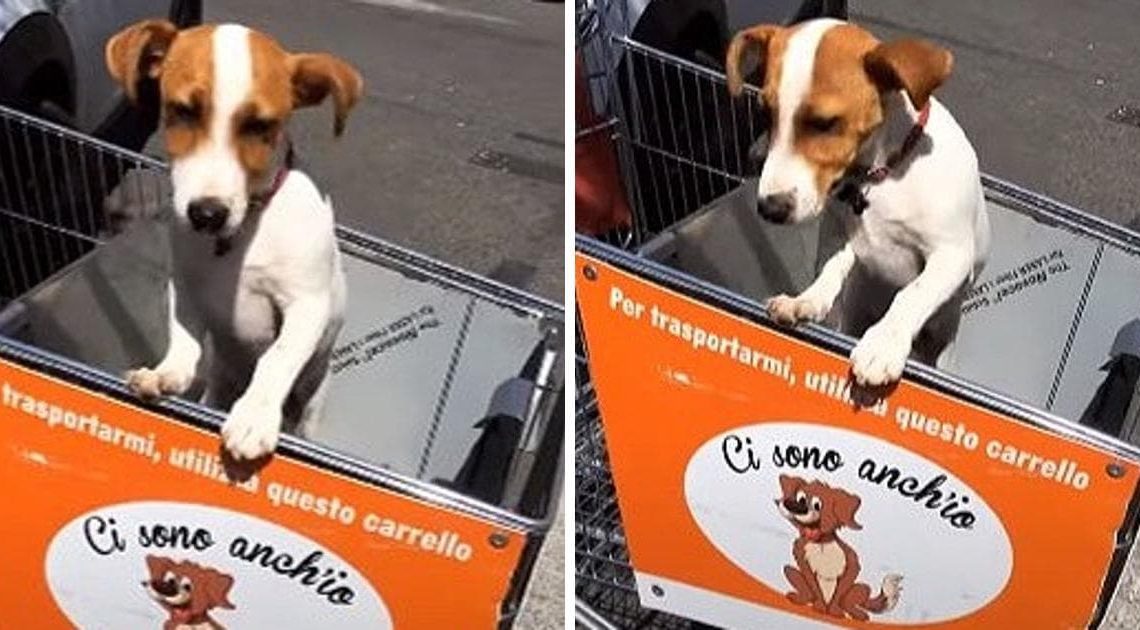 Some owners will carry their dogs in a bag or backpack when they are out shopping, but others may choose to tie up their pet outside the store while they go in and buy their groceries. A supermarket owner noticed many of his patrons rushing through his store while their dogs were left waiting outside. Gianfranco Galantini owns Unes grocery store in Luino, which is in the province of Varese, Italy.

Galantini decided to provide specialized grocery carts that are safe for dogs to ride in. This way his customers could take their time in the store, and possibly find more items to purchase. Dogs are already legally allowed in grocery stores in Italy, and every cart is cleaned between uses. So far there have been no complaints about the new carts.

In a video posted to YouTube by one of the shoppers, you can see an adorable puppy standing in the cart and looking at his owner. Seeing the dog standing with his paws on the edge of the cart shows why Galantini only suggests small dogs take advantage of the device.

When the owner in the video takes the cart outside, the dog jumps out. It would be safer to have your dog on a leash even while in the cart so they don’t jump out and hurt themselves. The dog in the video was very well behaved, staying by his owner’s side, and was safe.

The bottom of the dog area of the cart is covered in metal, with a metal sidewall blocking off the area for your groceries. The entire thing looks very practical and easy to clean. The cart is an incredible invention and hopefully will become more available to the public. 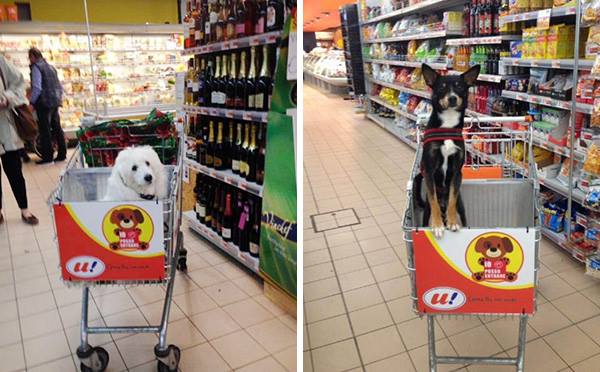 Now people don’t need to worry about their pets while they shop and the dog owners spending more time in the store means more time for them to make purchases; it is a win-win situation. “The owners of tiny dogs may now avoid having to leave them outside, giving them peace of mind to take all the time they need to complete their purchases,” Galantini said to La Repubblica.

The grocery store owner continued, “The initiative has recently started, but we have already noticed how much customers appreciate it. The space where the animals are placed is obviously separate from the shopping and is cleaned after each use.” Galantini has come up with a great way for everyone to be happy, even the dogs.

Galantini said to La Repubblica, “So far no dog has given any problems, at most one barked the first time it was put in the cart, but it calmed down immediately when the cart began moving.” A grocery store seems like the type of place a dog would love to be, and it definitely beats being stuck outside.

As of 2016, no other grocery stores in Italy have provided the special shopping carts. However, people can’t get enough of the idea and are anxiously waiting for their chance to try the carts out. The story was posted to Instagram and one commenter said they wished they would introduce the carts to supermarkets in their city. The comment said, “Great idea! The powers that be in NYC could take a lesson!” And another person tagged their friend while commenting “Let’s move.”