Members of this family share a bed with a pig and a skunk. 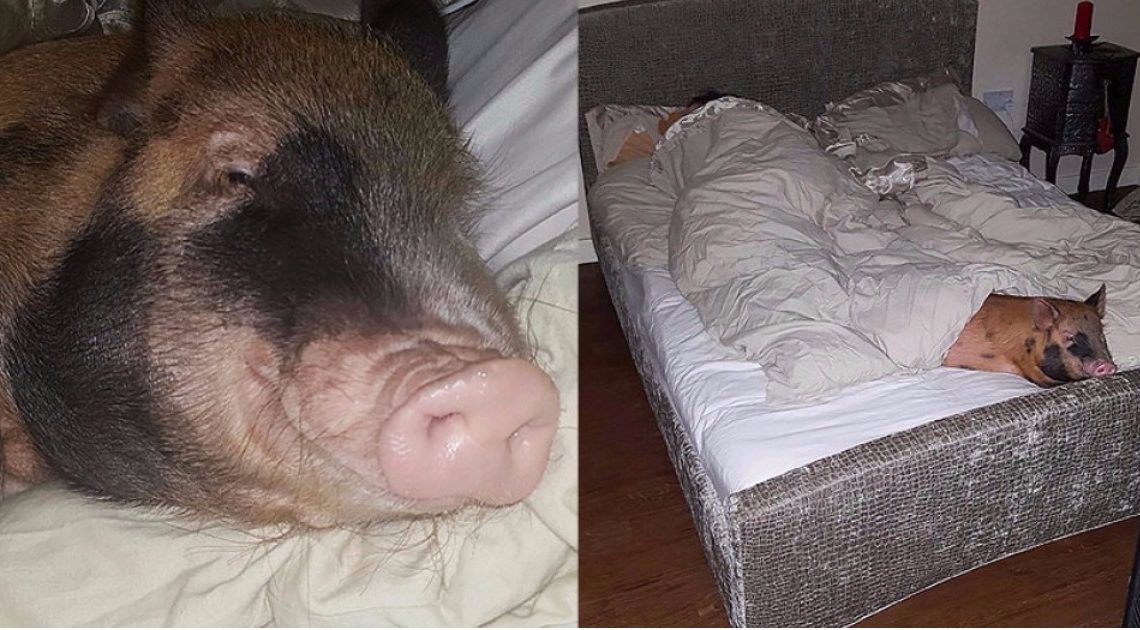 This couple always has a gas mask in their closet so that it can be used at any time. Why, Lemurov.net will tell .

The couple’s problem is not even in the pig, constantly falling asleep with its owners in bed and under the blanket, but in the skunk, which also sleeps next to it, only under the bed. 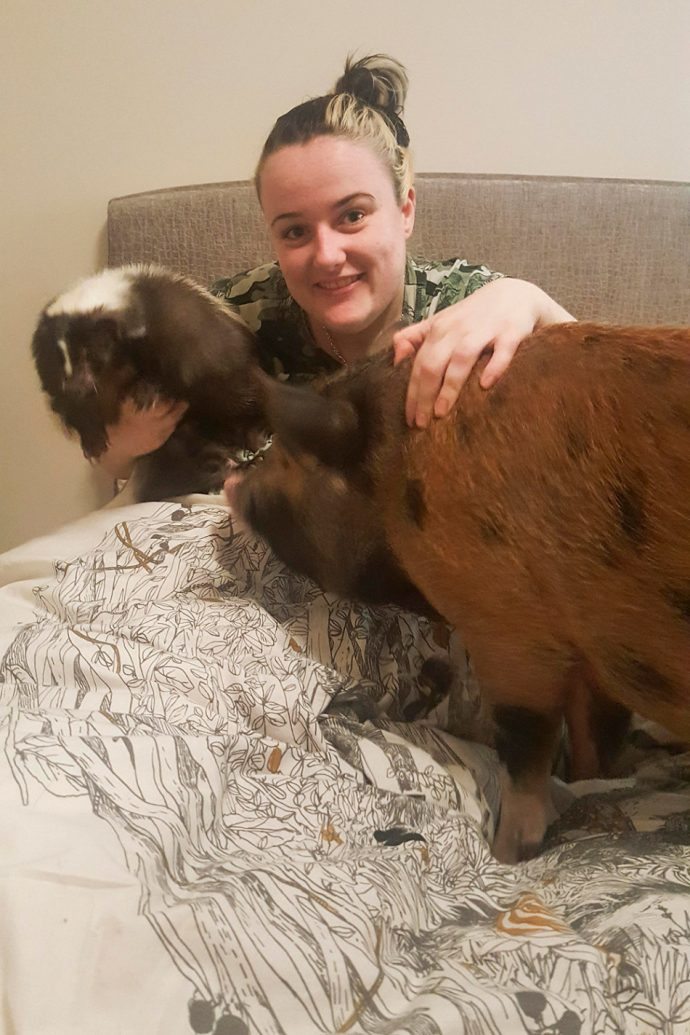 Jill and Scott Edwards are quite an atypical couple, as instead of the standard pets they keep a pig and a skunk at home. Moreover, they are already accustomed to falling asleep next to these animals every day.

Talking about a pig named Rudy, Jill calmly states that the animal falls asleep with her and her lover under the covers every day, and the pig loves to snuggle up to them.

The owner notes that the animal does not snore at all, but it often emits gases, from which the couple has to wake up. Jill says that Scott, when the pig does something like that, sternly, in a raised tone, says: “Rudy!”. 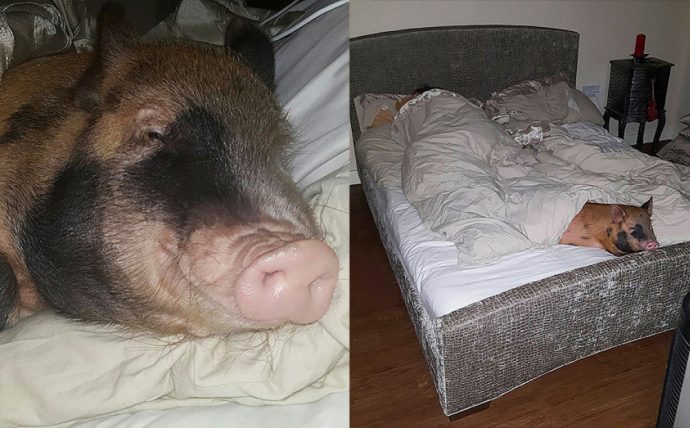 “Because of his (Rudi’s) gases, we always wake up,” the woman emphasizes.

The family decided to call the skunk Sophia. According to Jill, the animal likes to be given a little freedom.

She said that the skunk is constantly under the bed, since there he has his own bedding and blanket. 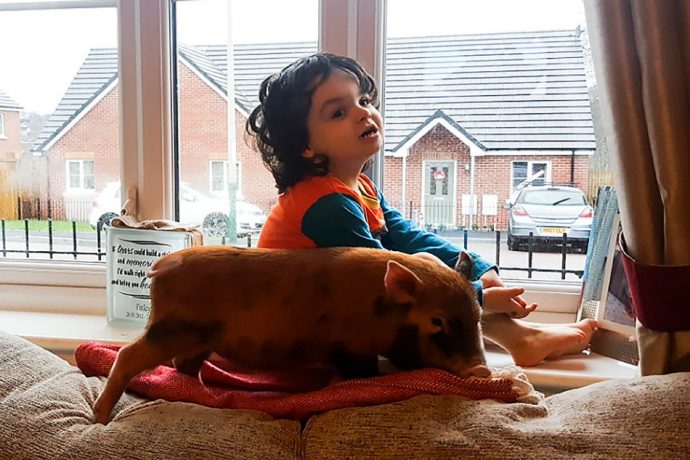 Considering that this is a nocturnal animal, Sofia begins to stay awake precisely at night.

“Scott sometimes has to sleep on the couch because he hates the smell of a skunk,” Jill said.

The couple have a small child of four named Oakley and, unfortunately, he has autism. It is noted that the kid is quite interested in spending time with Rudy. Parents are convinced that a pig can help a boy regain interest in the world around him – this is one of the main reasons why Jill and Scott keep such an animal at home.

The pig leads a fairly active lifestyle and bothers the family not only at night, but also during the day. The animal is constantly rushing around the house, gnawing on various things, as well as spoiling pieces of furniture and tugging at everything that catches his eye.

Jill said that Rudu even managed to have lunch with one of the first school shots of her child. For this reason, there are not many things in the couple’s house. She emphasizes that she has to make sure that the bathroom door is locked all the time. If you do not barricade the entrance, then the pig will run in and start eating toilet paper.

Many people ask the question, why did the couple surrender to all these “torments”? 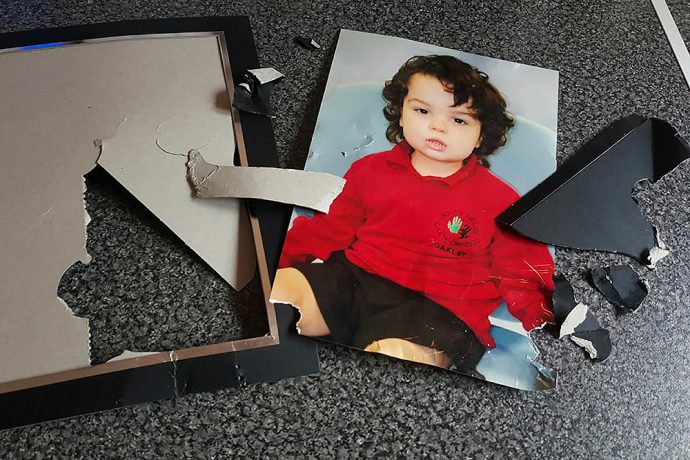 The answer is quite simple, the family loves this pig very much, as Rudy is quite cheerful and brings a lot of joy to the house, and also cheers everyone up. However, even this is not the most important thing. The main reason, as stated earlier, is that this animal helps bring the sick boy back to life.

Oakley hasn’t learned to speak yet, but he communicates with Rudy in his own way, which his parents find very helpful.

In conclusion, Jill said that the pig often lies on the couch? and her son recently began to sit down to the animal, hug and touch it.
She thinks this is great, since the family managed to find some kind of salvation for Oakley, and now the child feels happier.