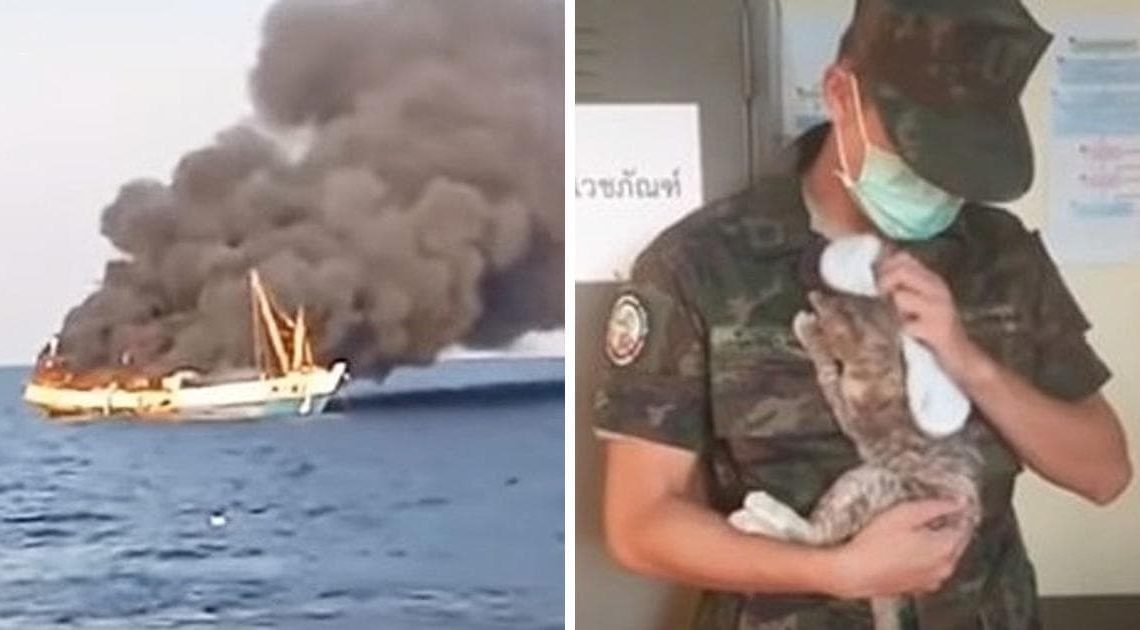 In March 2021, an abandoned ship near the Thai island of Koh Adang was on fire. Thick smoke and consistent flames exuded from the ship as it continued to burn and began to sink into the water of the Andaman Sea. Onboard were four small cats, trapped and drastically in need of help. While the crew members of the sinking vessel had already been saved earlier, the tiny animals were sadly missed and stuck on the ship.

In a sheer act of heroism, a team of navy officials located the boat and, upon spotting the cats, acted fast so they could save them in time. One navy officer, in particular, was quick to act as he jumped into the sea to make his way to the abandoned ship to try to rescue the four small cats. The sailor’s heart of gold and determination helped him get to the cats in time to get them away from the vessel that was still rapidly burning and sinking, and he maneuvered his way back to safety, carefully keeping the cats with him.

Video footage of the courageous act has been going viral all across social media platforms. Many people have praised and commended the navy officials who acted as animal rescuers that day, especially one sailor in particular who went above and beyond to make sure the animals were safe and sound. What was almost a catastrophic event turned out to be a day full of hope and heroism thanks to the group of navy officials who showed an immense amount of courage and bravery to take care of their new feline friends. 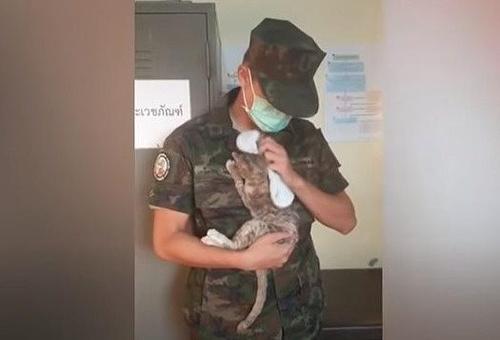 A video from the Daily Mail showed just how drastic the situation was. Thick black smoke filled the air around the abandoned ship as it burned and began to sink. The Washington Post reported that a team of Thai navy officials approached the vessel to check for oil spills when they discovered that there were animals trapped on the ship. Knowing they needed to move quickly, 23-year-old sailor Thatsaphon Saii jumped into the water and made his way to the burning and sinking vessel.

After paddling through strong currents for around 50 feet to reach the boat, he managed to grab ahold of the cats and bring them to safety, according to the Washington Post. “I immediately took off my shirt and put on a life jacket so I could jump into the sea, Saii said. “The flames were at the back of the boat, but it was starting to sink, so I knew I had to be quick.” Thankfully, due to Saii’s heroism, the four small cats that were trapped on board the ship were rescued and brought to safety.

The Washington Post reported that the sweet animals got cleaned up and received plenty of care and affection from the team of Thai navy officials once back at the navy’s official command post. The cats were wiped down and dried off by the people who rescued them before receiving some food. They even got to play and pose for photographs with the navy officials, who became their own personal heroes on that eventful day in March 2021.