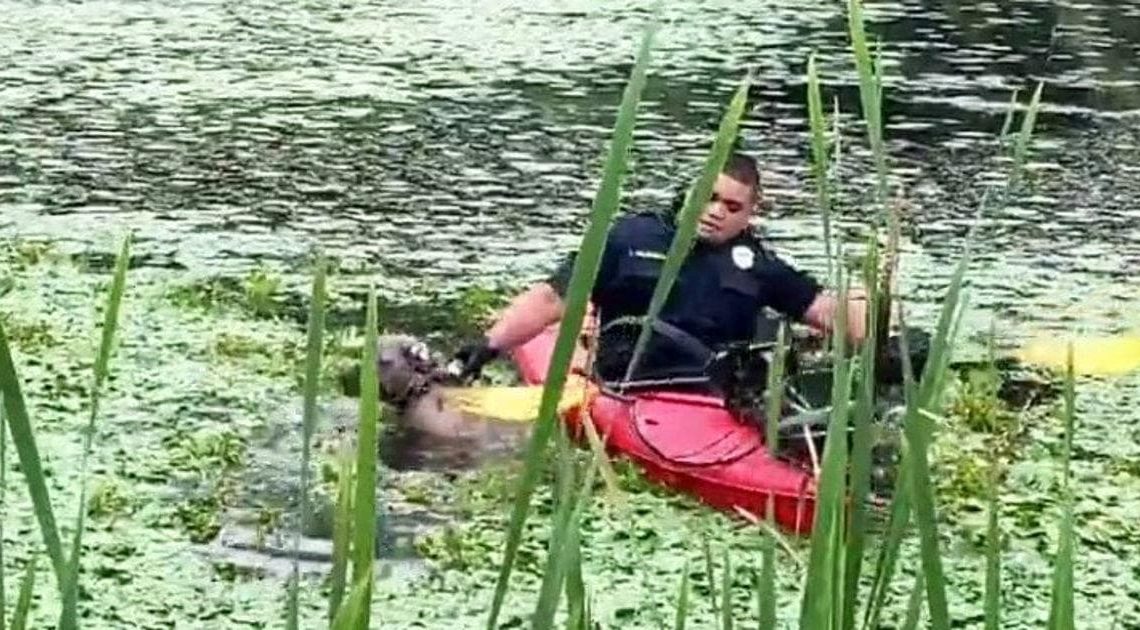 The Washington Township Police Department in Washington, New Jersey, made an important rescue in July 2020 when a local resident called the station worried about the safety of a dog they had spotted. The poor animal had a close call with a moving vehicle and, after narrowly escaping getting hit, found herself trapped in a nearby pond. Struggling to swim, the dog had a hard time maneuvering around the muddy waters and needed help to save her from drowning.

The dog named Akela had managed to get away from a car that almost hit her, but when she fled the scene, she ended up in a nearby pond. The water was deep and dirty, and it was difficult for the dog to keep her head above the surface. Akela treaded through the water as she continued to swim back to shore. The poor pup moved her paws quickly and worriedly to keep herself from drowning.

Luckily, help quickly arrived at the scene when the Washington Township Police Department showed up to help rescue the boxer mastiff mix. One officer, in particular, was fast to act and used some quick thinking tactics as he managed to get in a kayak to get closer to Akela. He did his best to move fast so he could help save the dog, who was still struggling to swim in the murky waters. After some failed attempts at getting Akela onto the kayak alongside him, the officer worked on helping to lead her back to shore where she would be safe and sound. 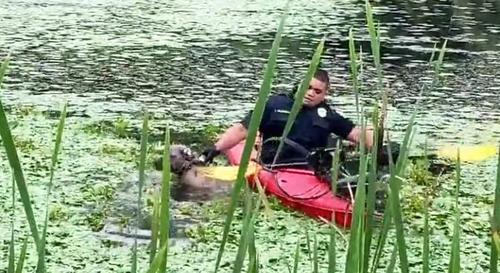 Just Something reported that Akela was almost hit by a car, which caused her to flee the scene as she ran away from the road. Unfortunately, this led to her landing up in a nearby muddy pond, where she struggled to stay afloat. After roughing it out for quite some time, Akela was spotted by someone who had called the police to help save the sinking pup.

When the Washington Township Police Department showed up, they found Akela treading the waters, and knew that they needed to act fast to help. A video was released showcasing the heroic rescue efforts. While Akela was struggling to keep her head above the water’s surface, officer John Kuligowski managed to borrow a kayak and used it to get closer to the dog, according to Just Something. Although he wasn’t able to pull her onto the kayak with him, he was able to lead Akela safely back to shore.

The police department released a statement on their Facebook page on July 8, 2020, that detailed the situation. “Today our officers were called for a K9 in distress,” they wrote. “Aleka, a gray boxer/mastiff had gotten loose and found herself stuck neck deep in some mucky water in a local pond.”

A few men on the unit, officers Kuligowski and Dallas Overko, along with Chief Thomas Cicerelle, were thankfully able to rescue Akela and “bring her safely to shore.” The police department explained that the dog was “in high spirits” following the incident, and even posed for a few photographs with them before they handed her over to Animal Control Solutions.