Do you want to know whether your dog has done something suspicious and naughty? Well, just take a closer look and see if your dog is silent? Is he keeping his head down? And is he pressing his tail hard against his body? If yes, you have found your culprit.

Based on this thing, a famous Facebook group called “Dogspotting Society” has asked people to submit pictures of their naughty dogs. And the results are hilarious.

If you want to see what the naughty girls and bois are up to this week, keep scrolling. 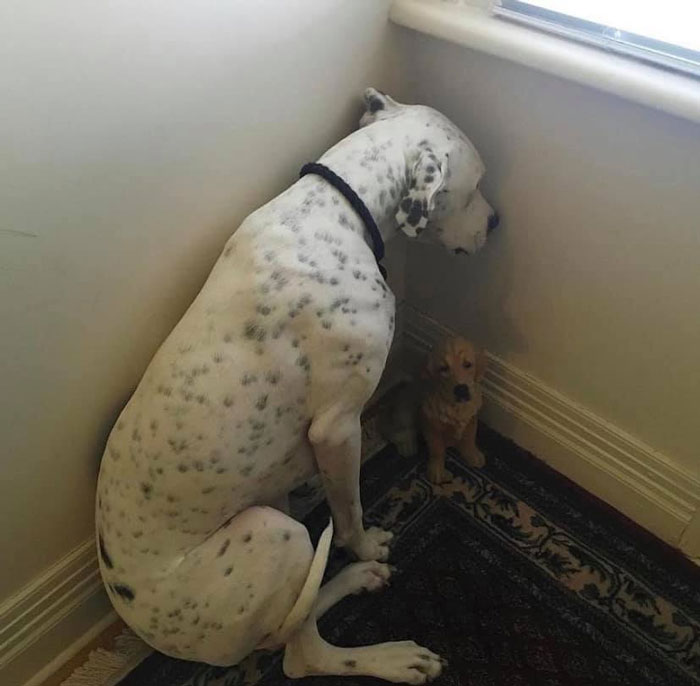 Banjo when he gets caught doing something naughty. He automatically puts himself in time out. 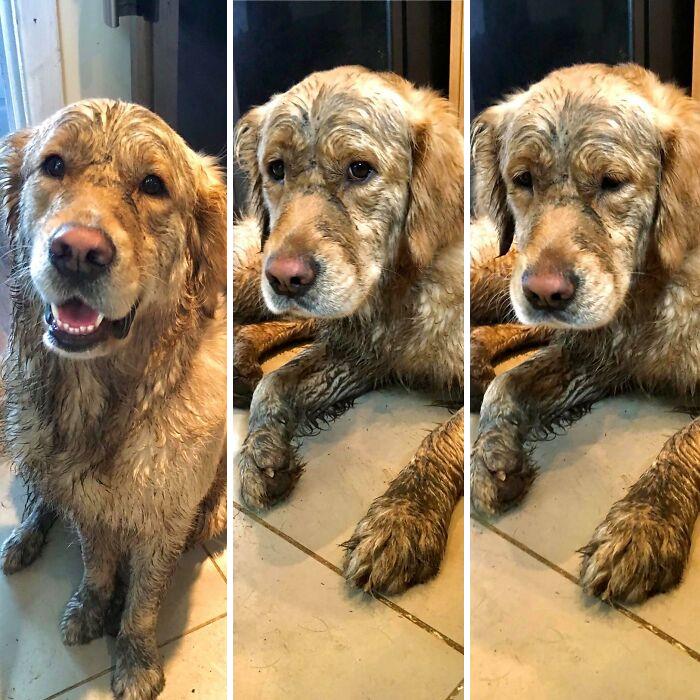 Three stages of realizing its bath time next. 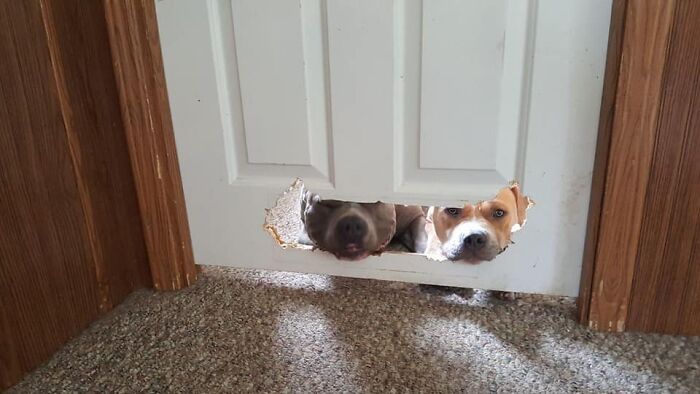 We even talked to Kate Mornement, an animal consultant, and behaviorist. Kate said, “the guilty look often involves dogs showing the whites of their eyes, lip licking, avoiding eye contact, tucking their tail, holding their ears back flat against their head, cowering, and sometimes hiding from the owner.”

Kate explained that while “guilt is a human concept, dogs are known to share other emotions in common with us, such as fear, anxiety, joy, and anticipation.”

“Guilt will be added to this list; however, we’ll have to wait for the science to prove it one way or another.” As for now, “researchers are trying to establish whether dogs actually feel guilty when caught out or whether they’re just responding to our behavior and body language and being scolded.” 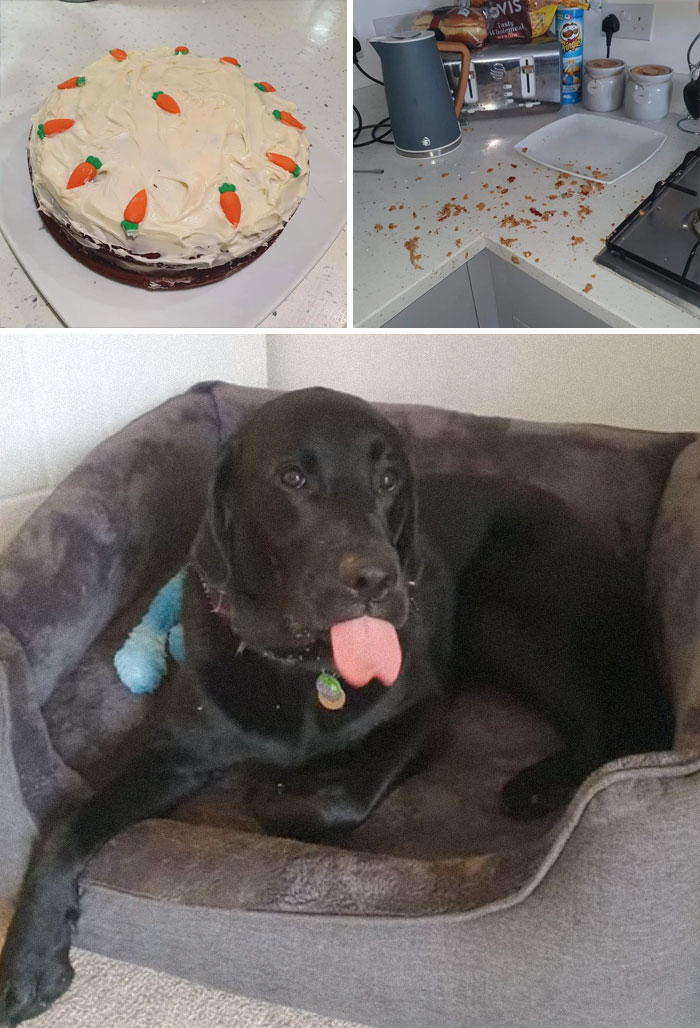 I made a beautiful carrot cake for my mum’s birthday in October. I left the kitchen for literally 2minutes and came back to a pile of crumbs I wonder who the culprit was. 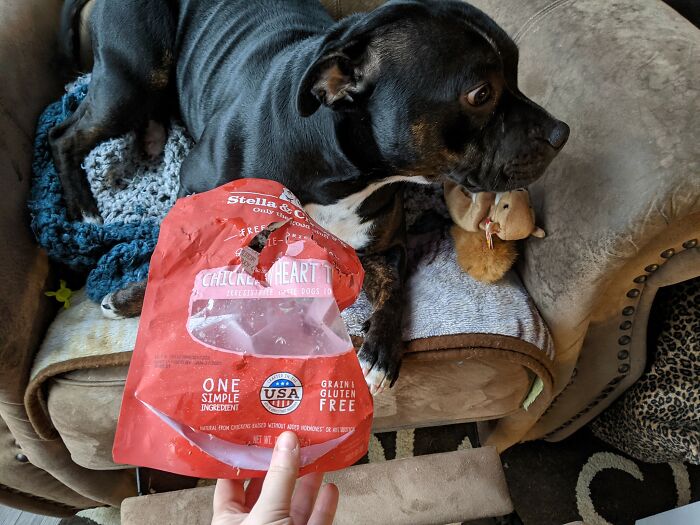 This morning while my owner slept I ate 2 bags of freeze-dried chicken hearts (60 or more) 2 bags of Raw coated biscuits. 1 bag of the freeze-dried liver. 12 dental chews size small. 3/4 of a yak chew bone. 1/4 of a 3kg bag of dry dog food. The farts are just starting…

My Doberman Django chewed through his lead, now he is Django Unchained.

A spokesperson of the Dogspotting Society said, “most of them based on universal experiences, so many people can interact with one another. Some of the other challenges we’ve seen are #ThenAndNow challenge, #WhatWasYourDogMistakenFor challenge,#SmilingDog challenge, and #UnflatteringDogPhoto challenge, just to name a few!”

“With so many people working from home, you’ll have more time to bond with your new best friend! We know this year has been very difficult for a lot of our members and the challenges have added a bit of levity for everyone.” 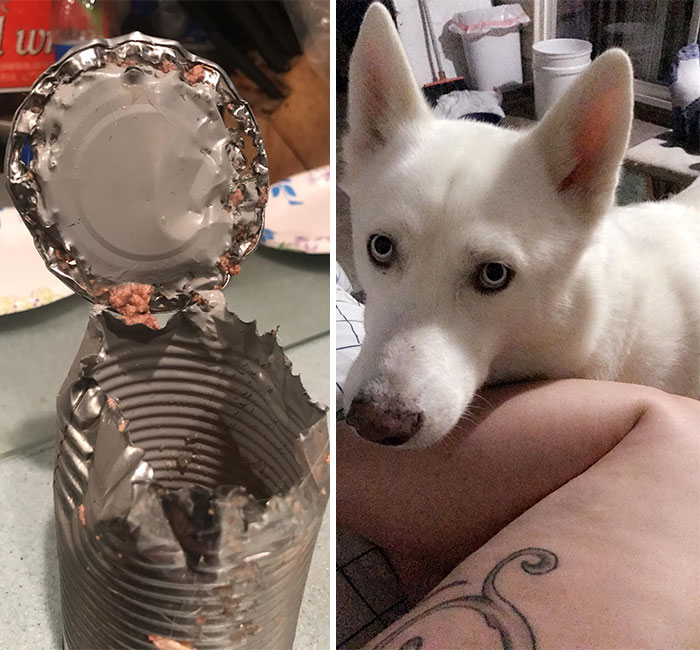 When they get quiet “no dogs were hurt” he did this to 3 cans to feed his brother chihuahua and sister Yorkie. 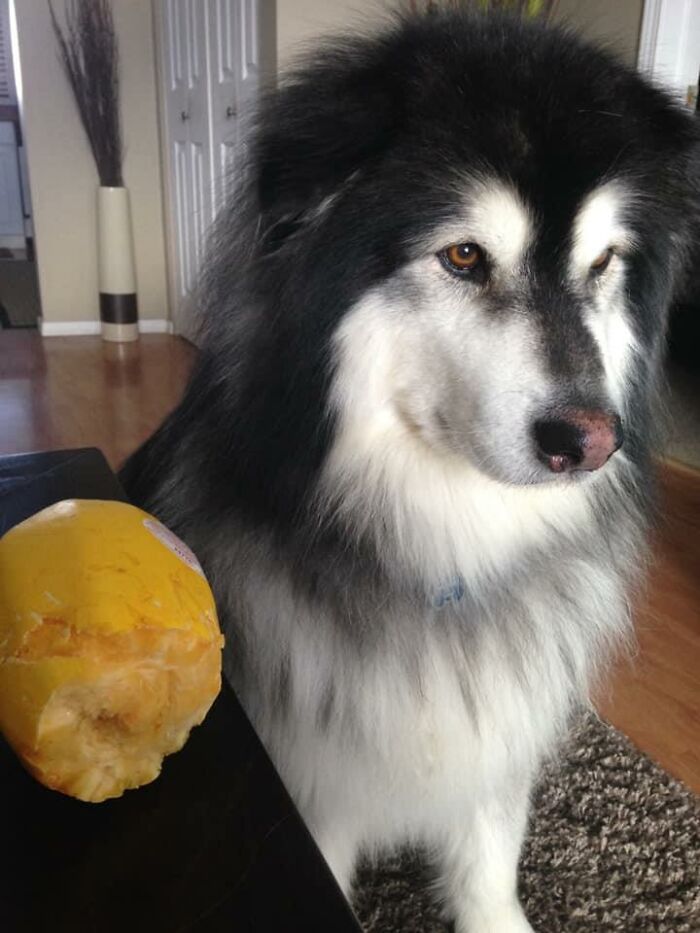 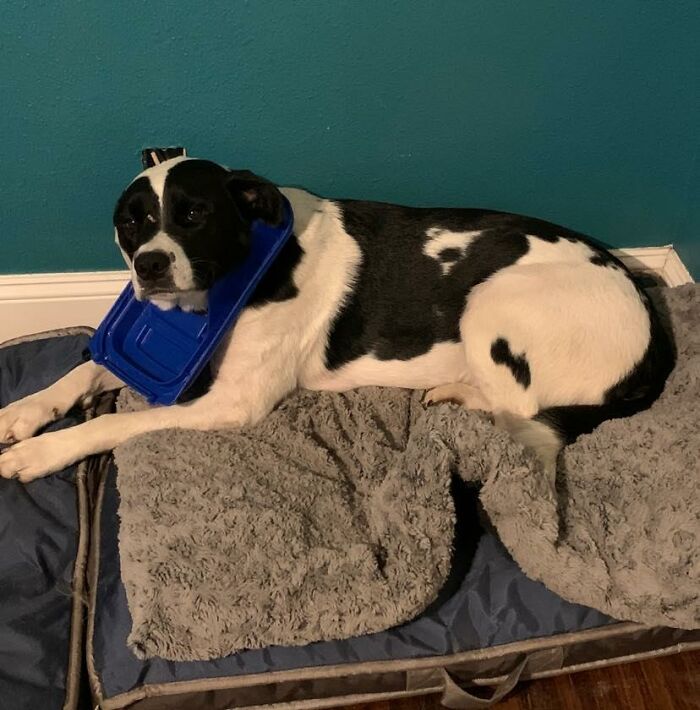 Me: Jäger… did you get into the cat food last night???? Jäger: 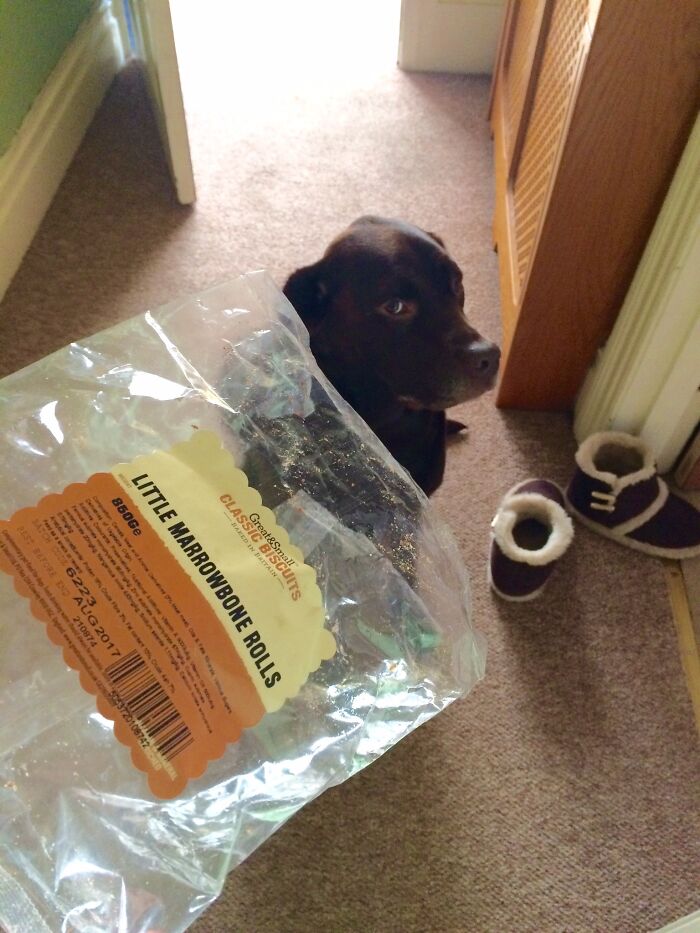 When Max first came to live with us, he was an expert kitchen burglar. He stole cakes, buns, entire loaves of bread, cocoa powder, cheeseburgers, packets of biscuits – as well as a bunch of non-edibles like pizza boxes, sweet wrappers, cigarette filters, and wet wipes. We had a crash course in keeping things out of his reach. The habit is so ingrained that we still do it now, even though he crossed the rainbow bridge last month. Hope you’re eating all the chocolate cake you can, Maxi! We miss you. 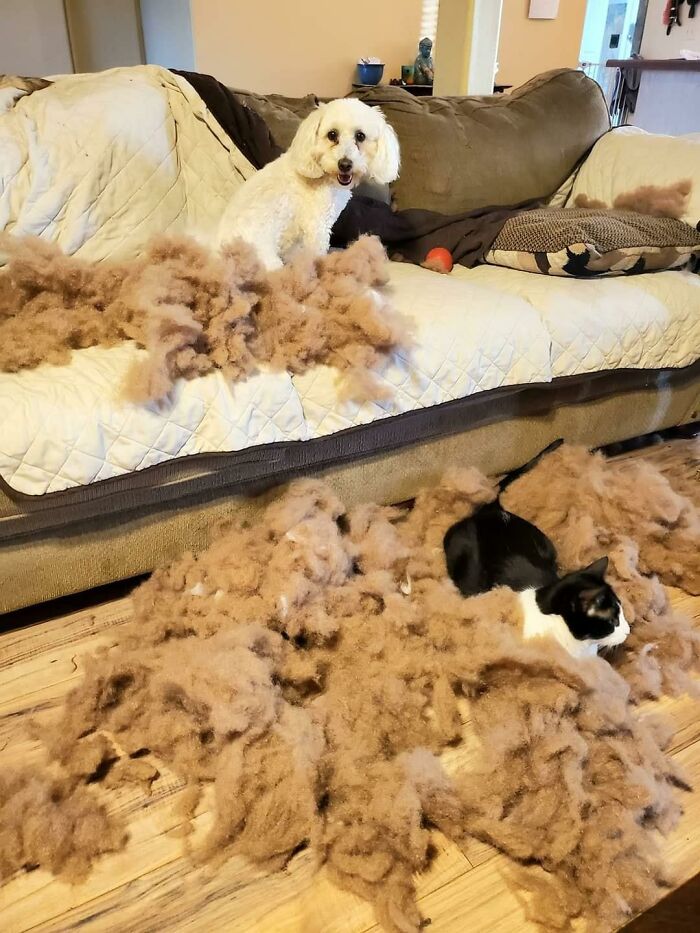 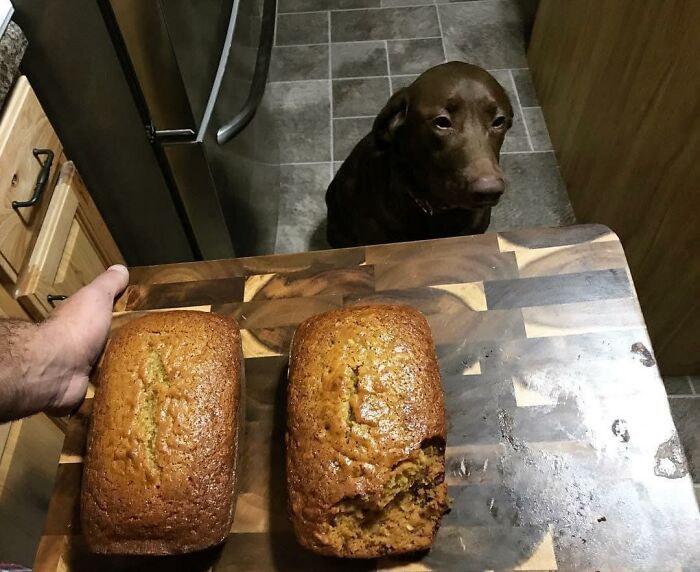 Throwback to Thanksgiving 2018 when I left the kitchen with 3 loafs of pumpkin bread and returned with less than 2. 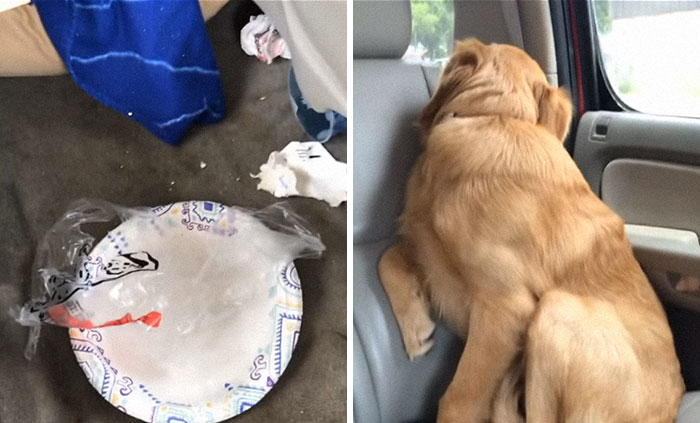 Idk how he managed to eat that pizza without us even knowing He gave himself up when we turned around and looked like that. 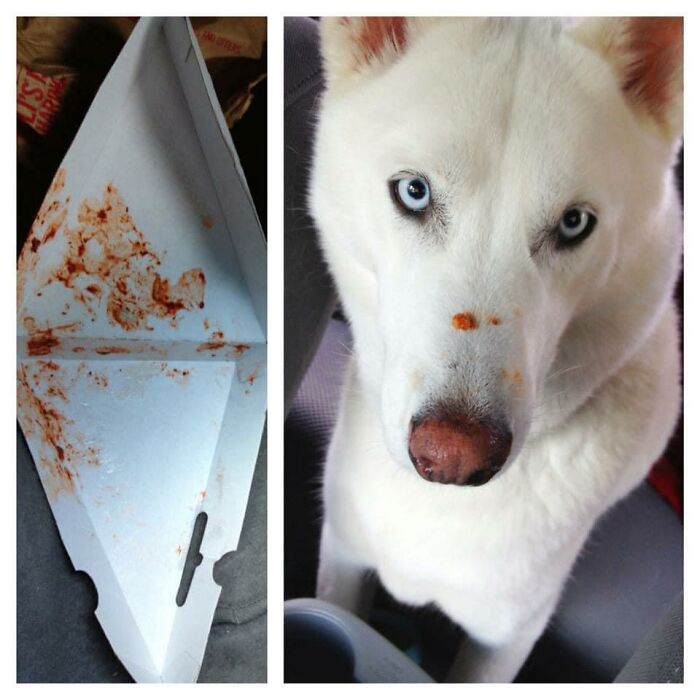 I got out of my truck to get gas. When I got back in, he said he had zero ideas where my pizza slice went. 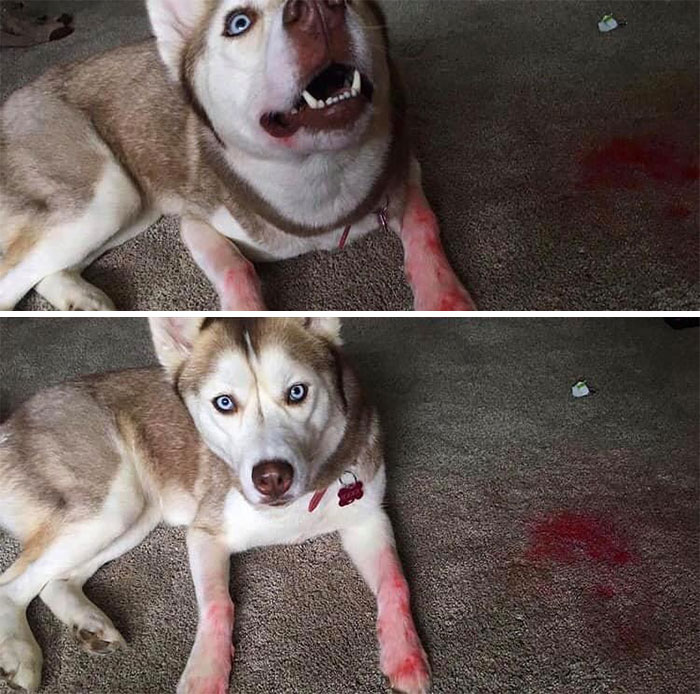 One morning I woke up to my husky that I thought killed something outside nope just destroyed a RED lipstick on carpet  with no regret LOL (hey I did get the floor and her clean) oh Sookie. She’s lucky she’s cute. 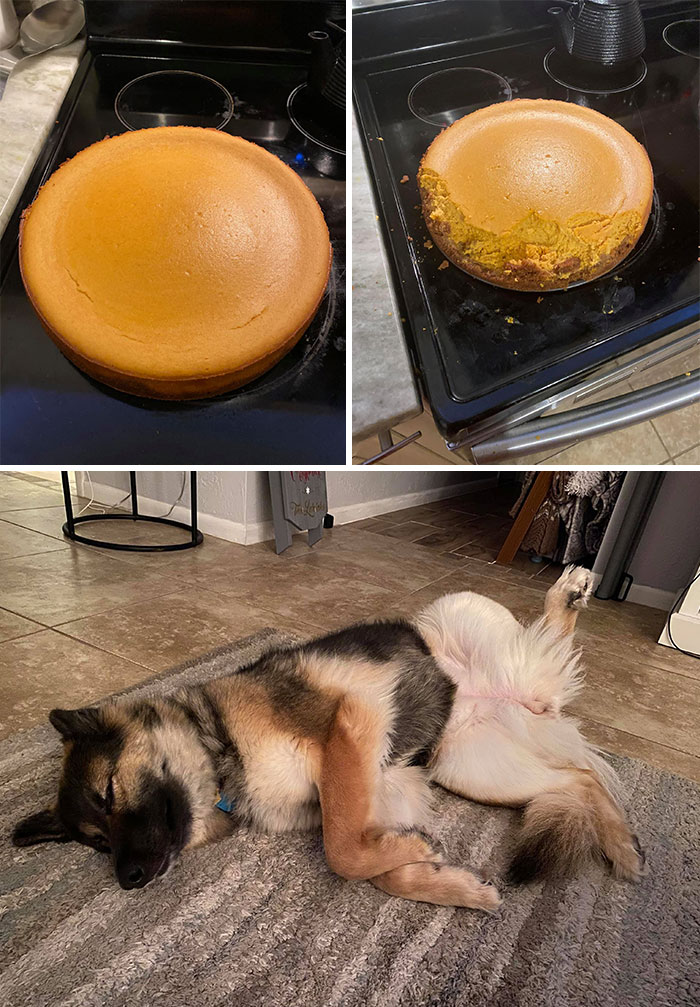 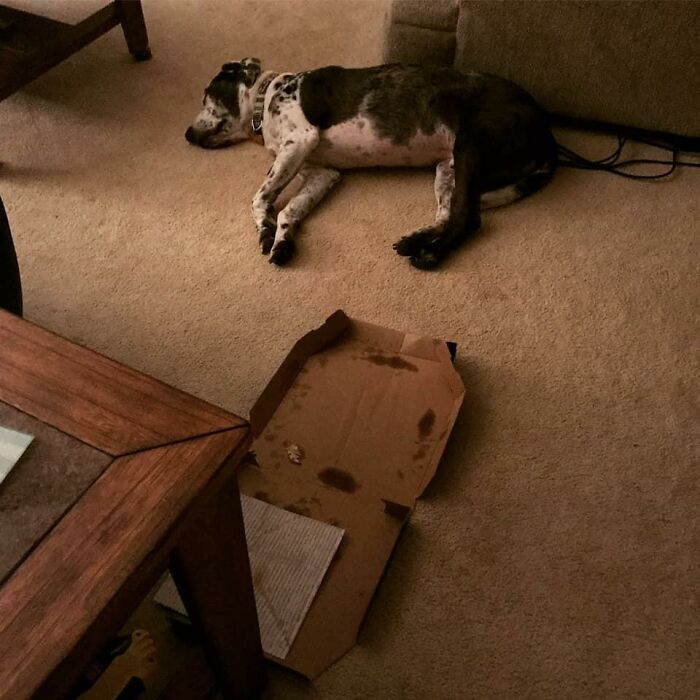 Ate over half of a pizza and then passed out in a food coma. I taught him well. 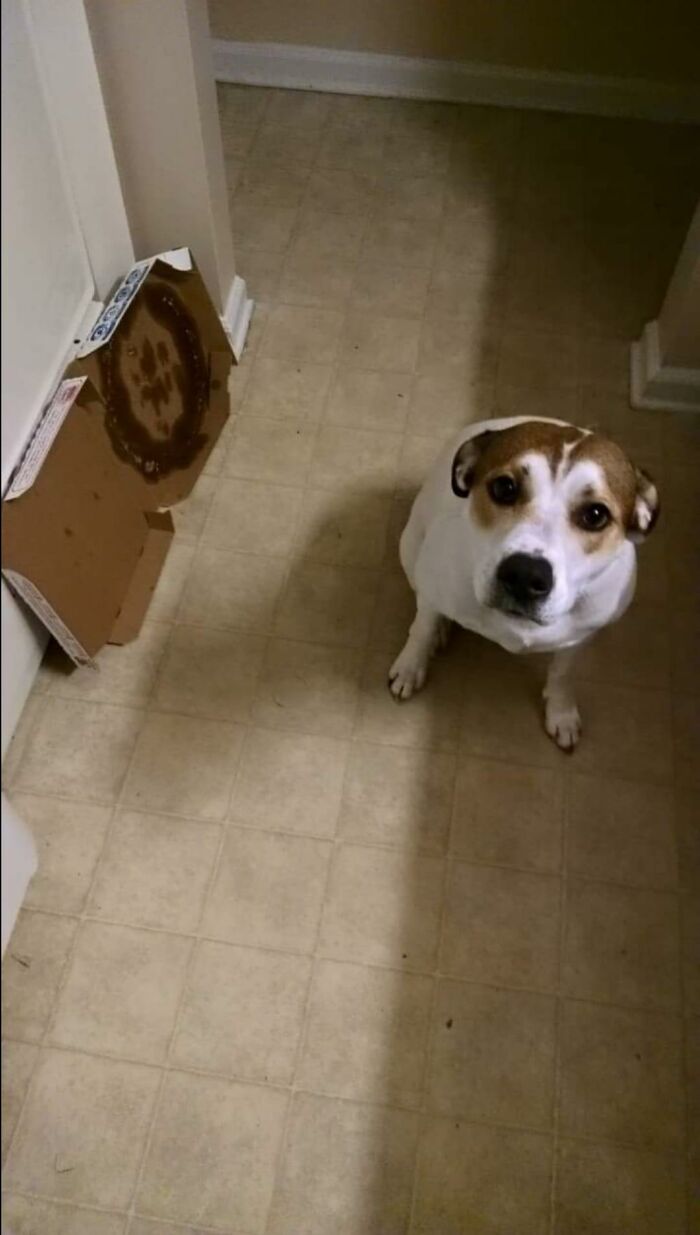 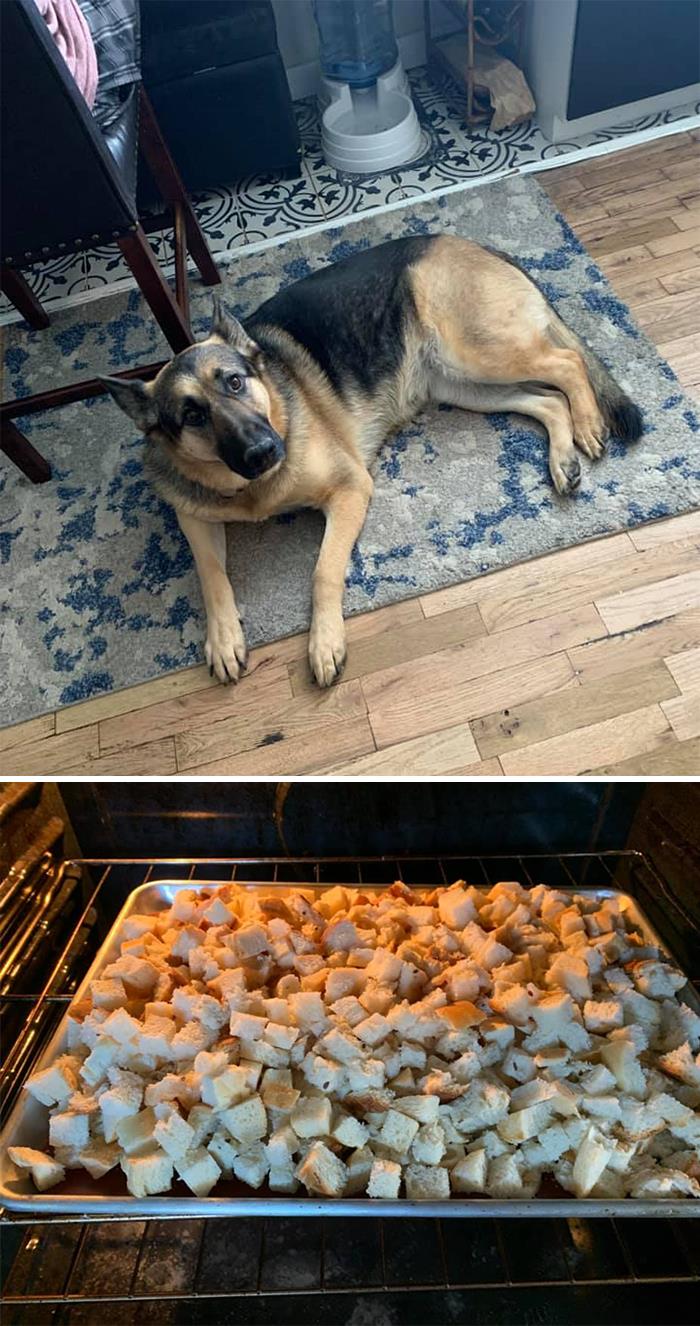 Making stuffing from scratch tomorrow so I cut up the bread to dry out, came back 5 minutes later and poof, gone! SHE ATE TWO LOAVES OF BREAD

Keeping the second batch in the oven where big chungus can’t get to it. 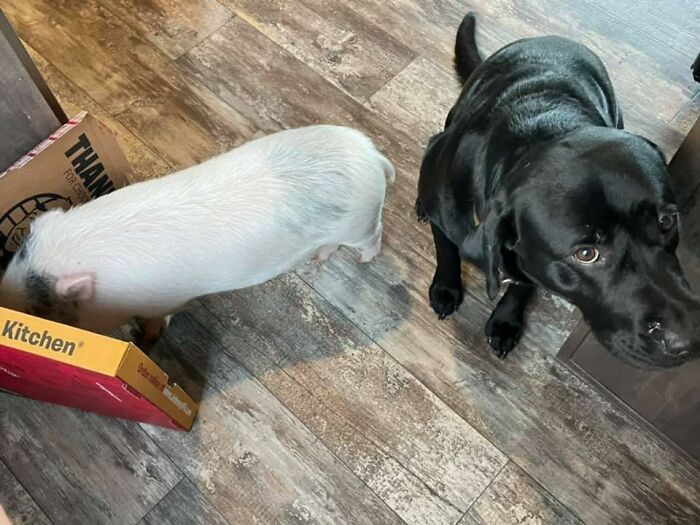 “But mom, Kevin Bacon jumped up on the counter… not me!” 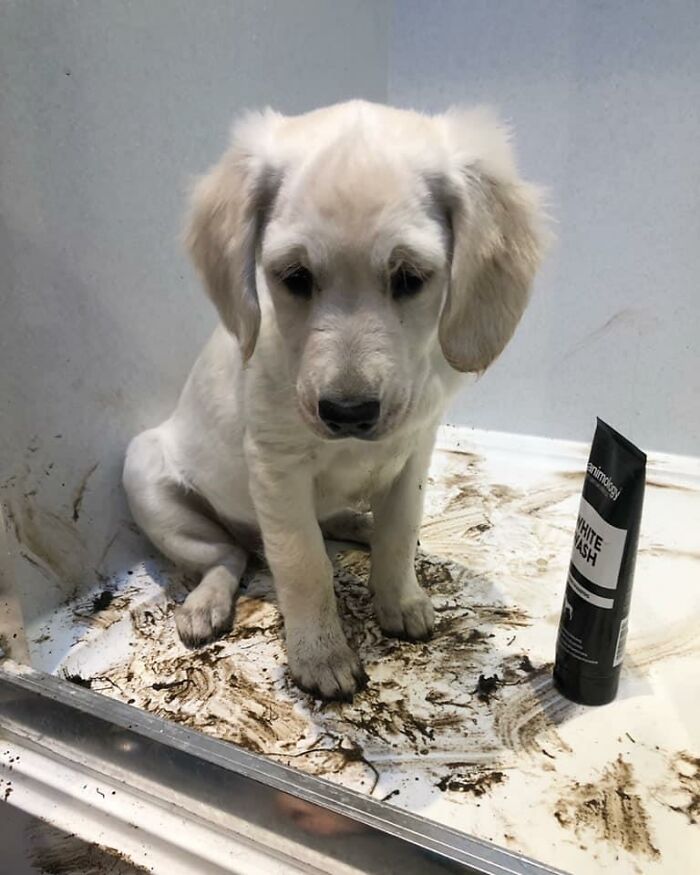 Someone decided to go digging in the garden and try to escape the shower. 10/10 for the guilt face though. 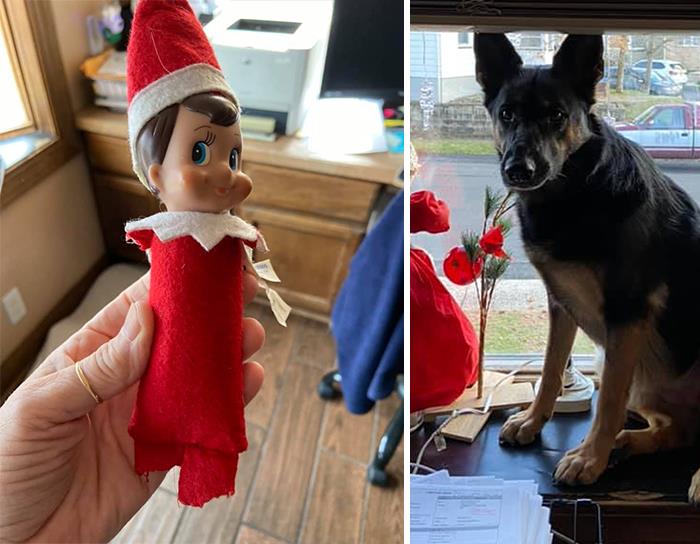 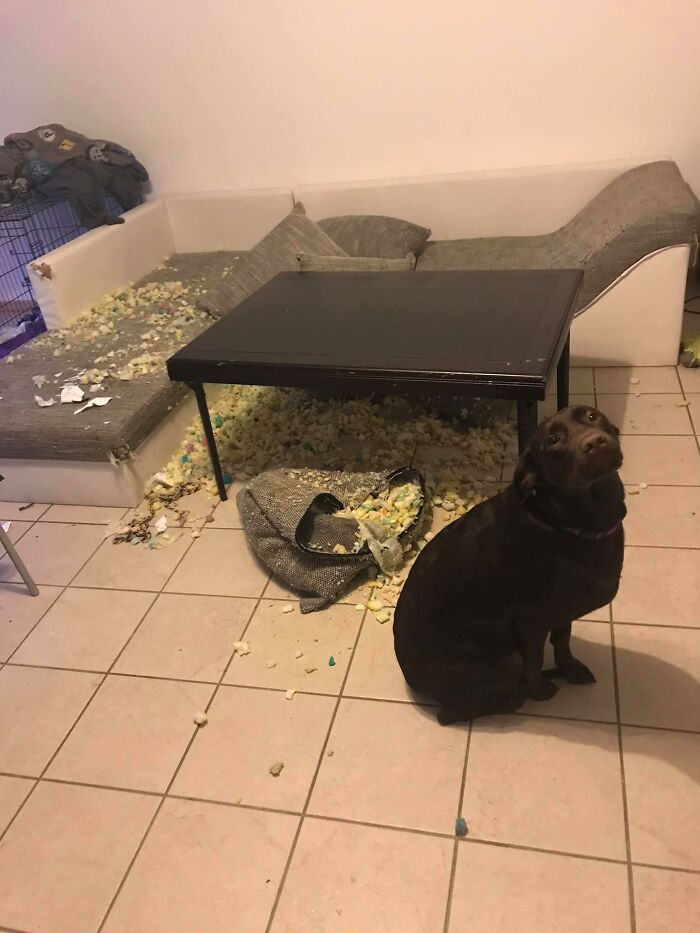 Hi, my name is Luna and I missed you while you were at work. 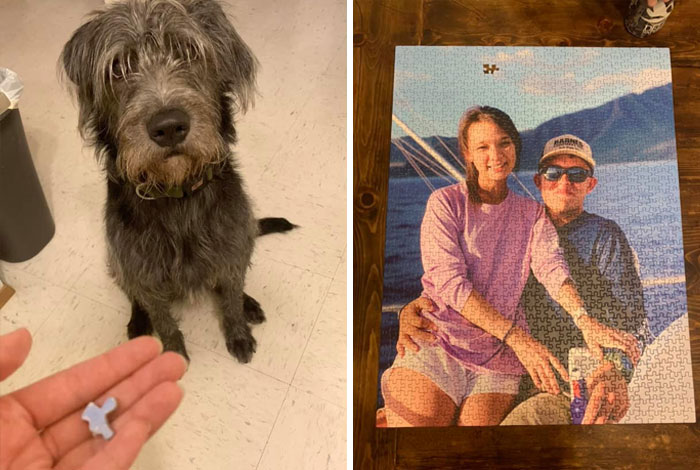 My husband and I had to quarantine for 2 weeks after he got back from deployment. We spent AT LEAST one week non-stop working on this puzzle he got for our anniversary. Needless to say, we never got to *fully* finish it. 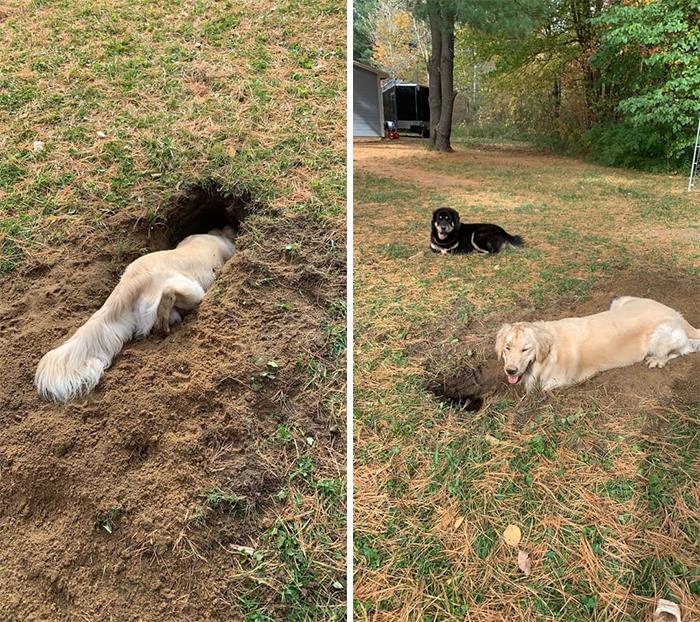 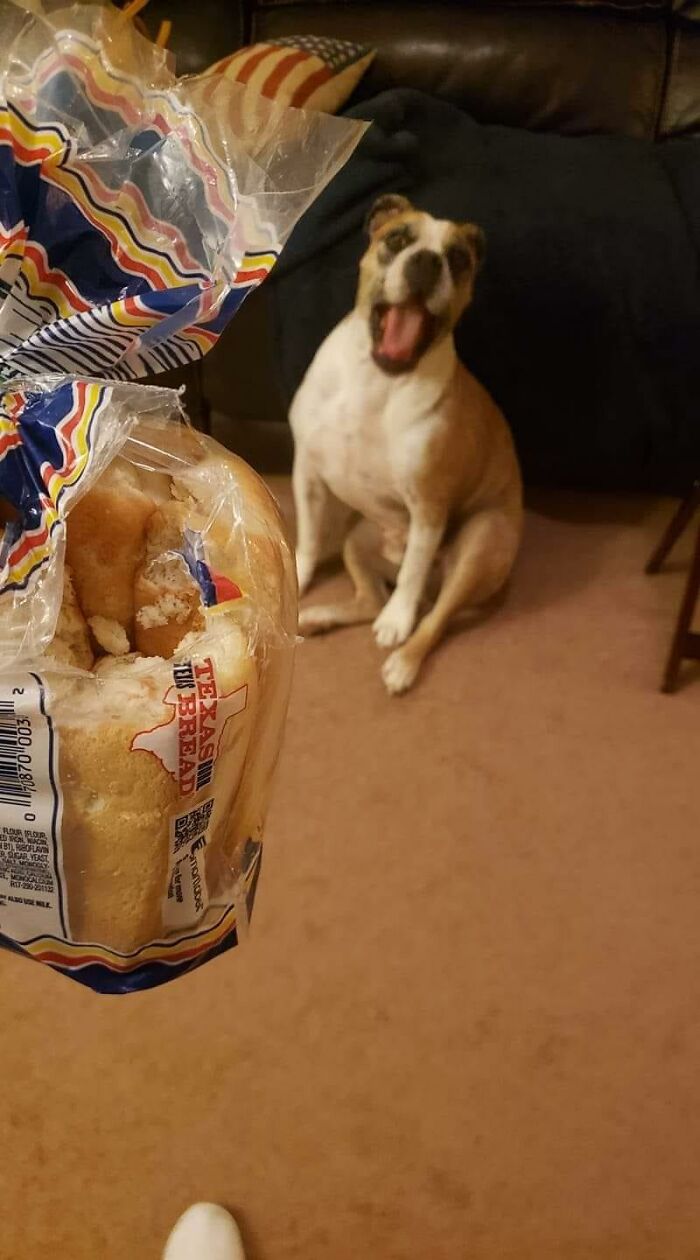 William can’t be trusted alone with the groceries.

Chester stealing toilet paper. He is so guilty and knows he’s not allowed stuff he will look the other way and pretend not to see you or run away depending on his mood. 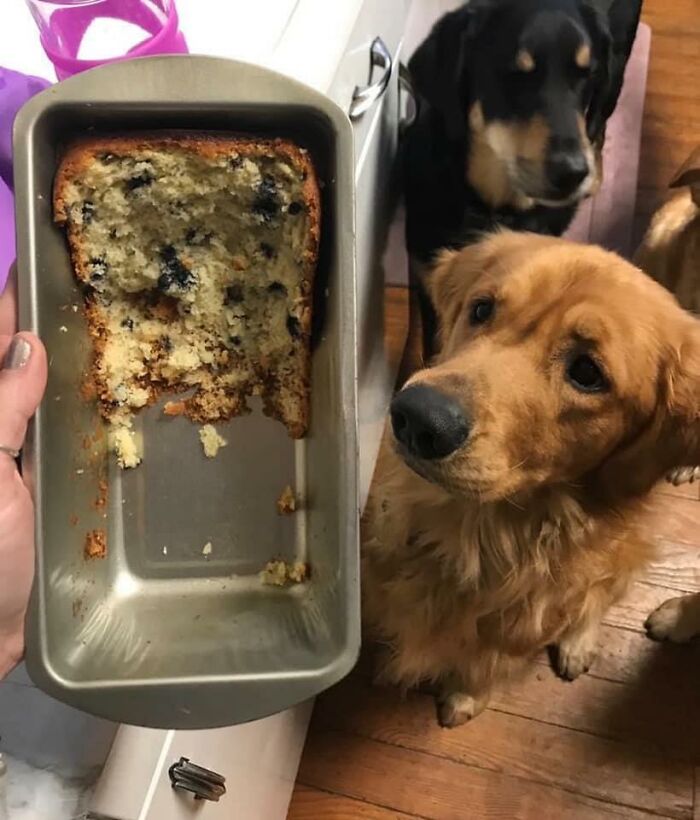 He ain’t even sorry!! 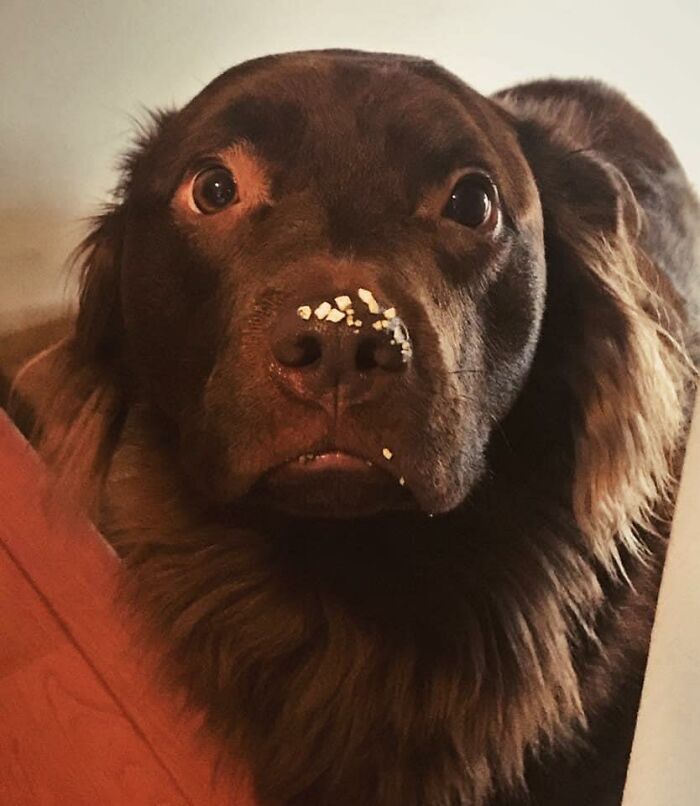 Someone got into the litter box. And it wasn’t the cat… 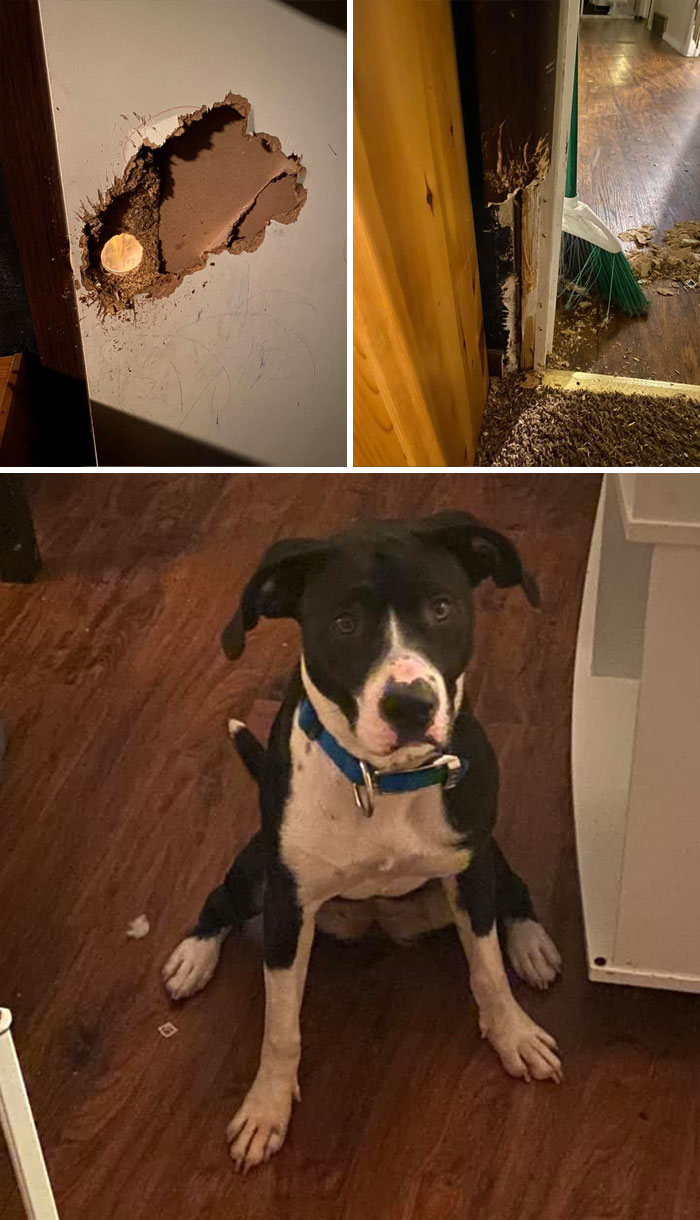