Videographer Captures An Adorable Clip Of A Deer, Fawn And Squirrel Eating A Meal Together 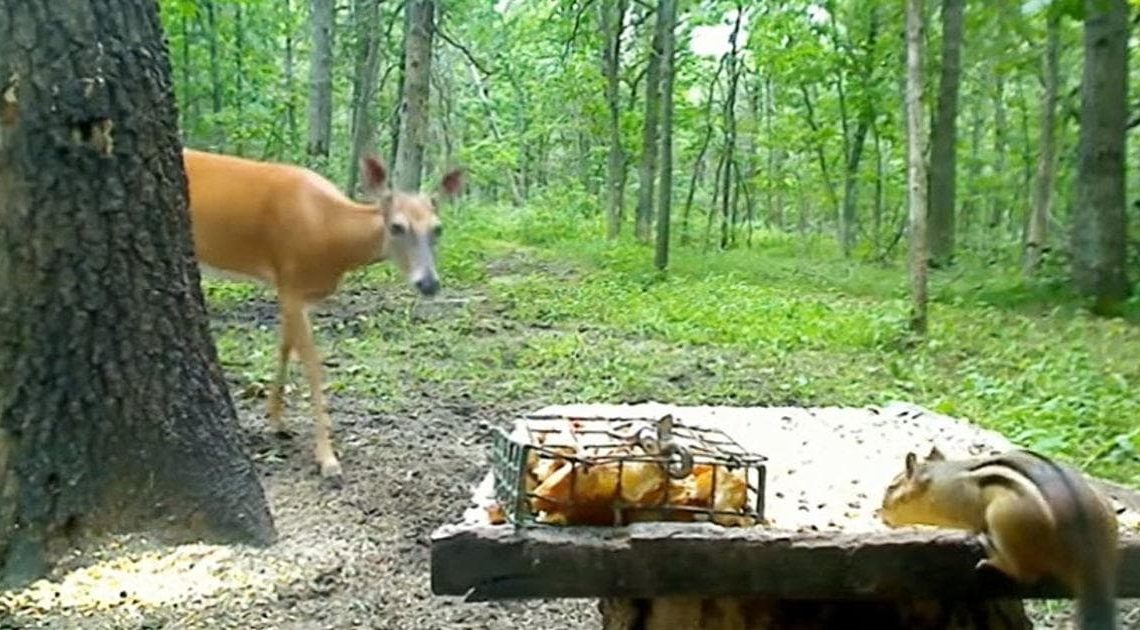 Some sweet friends came together for a woodland dinner feast in Minnesota. A table with what appeared to be some kind of nut was seen in the video that captured the moment, with a chipmunk on it scurrying about. A doe and her little fawn caught a whiff of the smell and made their way over to the table as well. The video was released in September 2016 and has received close to 10,000 likes and over 627,000 views since. These woodland creatures could have their own show with this amount of feedback!

Deer Trail captured the sweet video and has plenty just like it. Unfortunately, the group is no longer able to leave out food or anything else that could potentially attract or entice deer due to a ban in the state, according to the Minnesota Department of Natural Resources.

The video started with the chipmunk being seen nibbling on something on the outside table, next to a container full of what looks like acorns or another type of nut. He seemed a bit uninterested in the main meal, enjoying the snacks on the side. Soon enough, a doe and her baby approached the table, eagerly wanting whatever the chipmunk was eating.

They took a few sniffs at the surrounding area, searching the ground and a large tree for something to munch on. Their forage came to an end when they were met with the chipmunk and the small array of food on the table. After a quick welcome, their happy feast was able to begin. 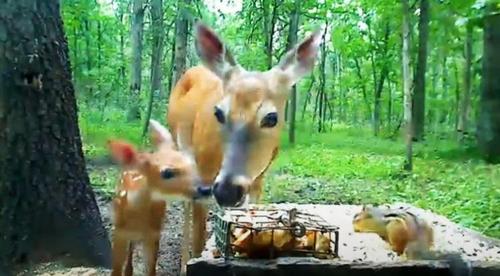 Snacking In The Wilderness

What do chipmunks and deer eat? While it’s still a bit unclear just what exactly the chipmunk was feasting on in the viral video, it wouldn’t be a surprise if he was enjoying a nice acorn or some other kind of nut or seed. According to Forest Hills Connection, chipmunks typically eat nuts as their source of protein. The little animals are a bit picky, though, choosing only the finest of the bunch to gnaw on. They then take the acorns and stuff them until their cheeks are filled to the brim.

Chipmunks hibernate in the winter, meaning it would make perfect sense for the one seen in the video to be stocking and fattening up for his long sleep ahead. According to the National Wildlife Federation blog, chipmunks hibernate for the entire winter, but they don’t actually sleep the whole way through. They wake up every few days to stay warm and eat their stored food, according to the National Wildlife Federation blog.

Deer are a bit less picky with their food choices. According to North American Whitetail, they enjoy munching on leaves, twigs, weeds, grass, nuts, fruit and mushrooms. The time of year and the climate they live in can impact their choices, depending on what is available to them. The goal is to find something that will keep them warm and nourished during the colder months. As was seen in the wildlife capture video, the doe and her fawn appeared interested in whatever the chipmunk had to offer them.

A Forest Feast For Three 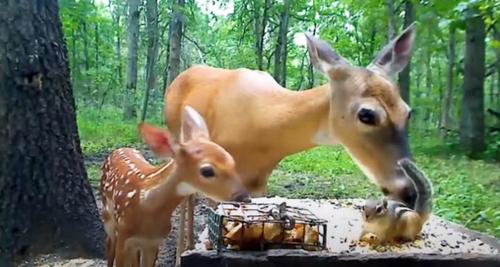 The little fawn clearly had eaten enough and was ready for something to drink. She went to her mother for some refreshments, seeming to be bored of the new options in front of her. The fawn continued to nurse on her mother while the doe kept snacking on all the sustenance in front of her.

The chipmunk continued scurrying around the table, enjoying all of the things he had to crunch on. He left shortly after he had his fill of food. The doe took her baby’s constant want for her milk as a sign that it was almost time to finish up with their meal. After plenty more quick and greedy bites, the doe got her fill and stepped away from the table. The fawn seemed a bit startled at first, shaking her small head in disbelief that it was really time to go. She sniffed the goods on the table once more before turning to follow her mother back into the forest.

While it remains unclear if the doe and her fawn will ever get to meet the chipmunk for another friendly feast like this one again, it’s evident that the group had a great time together and all got to enjoy a wonderful woodland meal.